In the mid 1980's a ritual in the first couple of months of the year was to find and spend hours pouring over the new yearly G.I. Joe catalog that was included with the vehicles.  1984 was full of amazing new figures and the awesome Whale.  1985's figures were somewhat known, but the surprise of the USS Flagg was amazing.  1986 brought more character replacements, but in awesome new characters who could stand on their own.  And, 1987 introduced the Defiant.  What was missing from the 1987 catalog, though, was any indication of the G.I. Joe movie.  Except, buried in a small photo in the middle of the catalog was a special three pack of figures: Sgt. Slaughter's Renegades.  They figures didn't get much attention (their photo is the same size as the the photo of the motorized battle packs) and seemed an afterthought of the 1987 releases.  When I found the pack at retail, I bought the figures in the zeal of newness.  Mercer quickly became the only figure from the set who found a home in my collection.  But, through the years, I have come to appreciate a second member of the Renegades: Red Dog.

As a kid, Red Dog could not find a place in my collection.  He and his pack mate, Taurus, simply never worked as Joes for me.  They were too far out there to be Cobras.  And, they didn't really fit with the Dreadnoks.  So, I ended up using them in various civilian, criminal and terrorist roles.  Here, they could die with impunity and I didn't have to burn a good Cobra or Joe figure in the process.  Their gear was the type of oddball stuff I'd associate with an ill funded foreign terrorist organization.  And, Taurus would later remind me of the character "Horst" from the Special Missions comics.  So, Red Dog received no special characterization from me and simply became a lost figure in my Joe room.  He would fill various roles as I needed someone.  But, the greatest value of the figure was his pistol.  Beyond that, I paid the figure little attention.

In late 2001, though, that changed.  Funskool released their version of Red Dog at this time.  Their albino version of the character brought Red Dog to life and he became a vital part of my collection.  With him, though, I really had no use for the original version.  The two figures were distinct enough that they could co-exist.  But, with the cool, villainous Funskool Red Dog in hand, the need for another version of the figure dissipated.  So, Red Dog went MIA in my collection for many years.  It's only been recently that he's returned.  And, that was mostly just to complete my collection and, to take photos for this profile.

But, I've found that the figure isn't as terrible as my 1987 self thought.  Red Dog is full of personality.  His head is well detailed and distinctive.  While the football uniform is kind of lame, it does bring a different vibe to the character.  The clothes look like hand me downs or something rescued from a dump of unsellable merchandise.  To me, this makes Red Dog a better character.  Instead of having a professional athlete background, he is more of a scavenger who grew up poor and now takes on military jobs as they pay well and appear to a sense of danger.  The rest of the mold is also well detailed and gives Red Dog a much greater appeal than when he was just another random guy in a 3 pack.

Oddly, Red Dog was Hasbro's "person of color" release for 1987.  Stalker was released in 1982.  Doc in 1983.  Roadblock filled the role in 1984 with Alpine following in 1985.  A new Roadblock and Iceberg were released in 1986 and Hardball was released in 1988.  Every year of the vintage line other than 1987 featured at least one African-American character who was sold on a single card.  Technically, the Fridge was released in 1987.  But, only as a mail away.  This left Red Dog as the one non-caucasian figure released at retail that year.  Red Dog's Samoan heritage is overdone.  But, it was nice to see some additional skin tones added to the Joe line beyond the white and black faces that dominated the team's racial makeup.

Red Dog's gear isn't great.  He includes just a pistol and backpack.  The backpack is a recolored release from the 1985 Dusty figure.  The color works with Red Dog well enough.  He also includes a pistol.  The pistol is larger than most of the pistols of his era.  This is nice as it isn't as easily lost as the weapon from the 1986 General Hawk or 1987 Chuckles.  The weapon is detailed enough.  As a kid, I used it as super powerful pistol since it was so large.  I see the weapon as Red Dog's, exclusively.  For some reason, it's just too tied to the Red Dog figure for me to use it with anyone else. The pistol worked with my function for Red Dog.  It was unlikely that a random terrorist would have access to military weapons.  So, a powerful pistol worked much better when he would get close and take a shot at Duke or Flint.  But, the lack of distinctive gear also hurts the figure.  Just a repainted pack and small gun aren't enough to overcome the other issues with the Red Dog mold.

The Red Dog mold didn't see much use. After the American figure's release window closed in 1988, the figure showed up in Europe on an Action Force card.  This is noteworthy since Red Dog was sold as a single carded figure.  Through the years, I've heard there are very subtle color differences between the American and European release Renegades.  I've never compared known country of origin samples to confirm or deny that, though.  After this release, Red Dog disappeared until 2001 when he appeared in India.  Funskool produced him for a few years.  There is no evidence that Funskool returned him to Hasbro in the early 2000's and they may still have the mold.  There are a couple of Funskool variants (most notably flesh or white colored elbows) for collectors to track down.  In 2006, the club recast a Red Dog head and released it as part of a convention attendee set.  The head was painted and was, generally, poorly received.  Even today, this figure is incredibly cheap for a convention attendee release.  The character was revived in the Anniversary era for a release, too.  So, Red Dog fans have a decent array of options for the figure.

If you're looking for a Red Dog figure, he's pretty easy to find.  Usually, though, he is sold along with his Renegades team mates.  In recent years, large quantities of lower quality carded Renegades sets have shown up.  So, you'll see people pay up to $40 for a mint and complete set of the three Renegades with carded versions selling for only $50.  On his own, Red Dog isn't expensive.  However, it is getting increasingly difficult to find a sample with no paint rubs.  The notoriously fragile gold paint on his head, neck, belt and, especially, arms is usually flaked or rubbed.  Decent versions with the filecard tend to sell in the $10 to $12 range.  But, the filecard is the expensive piece.  Just a complete figure will run you $7 or $8 with incomplete figures easily available for $5 or less, depending on paint wear.  There is a huge supply of the figures available (the benefits of being released in 1987) and once that's combined with a low demand, you get a cheap figure.

For the price, there's no reason to not own the figure...especially now that the Funskool version has gotten a lot harder and more expensive to find.  For me, Red Dog is used to complete that childhood collection that ended in 1987.  But, other than that, he has little use.  He does look nice when posed with Mercer.  But, the oddball of Taurus limits the notion of the three of the figures as a team.  So, the Funskool figure (who I use as a bad guy) remains my Red Dog of choice.  For those who grew up on the animated movie, though, this figure may have substantially more significance. 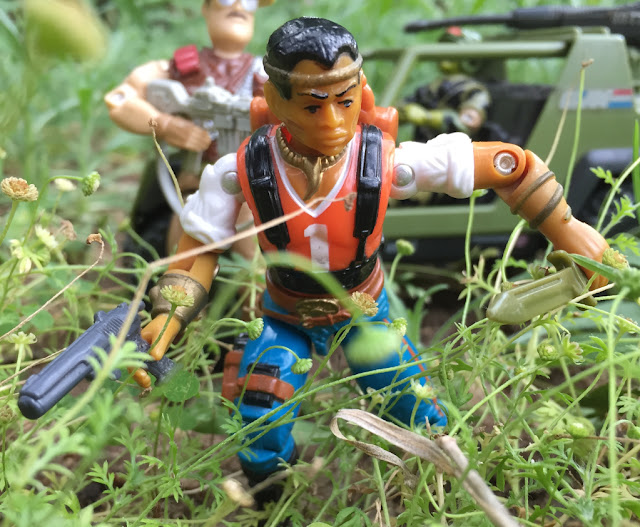 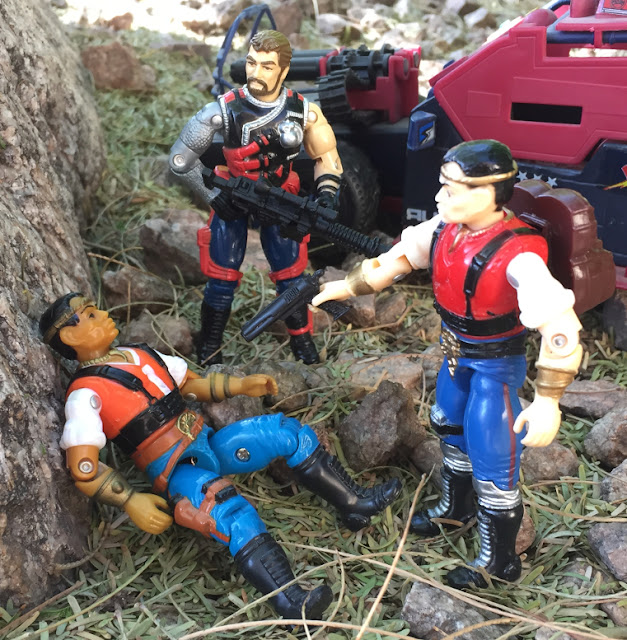 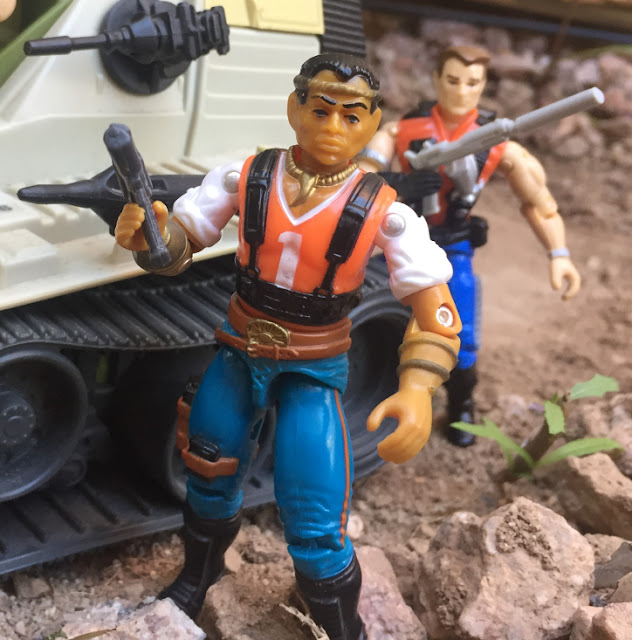 Posted by Robot_Sonic at 1:48 AM
Email ThisBlogThis!Share to TwitterShare to FacebookShare to Pinterest
Labels: 1987, Red Dog, Slaughter's Marauders