2002 was 16 years ago.  When Hasbro released the 2002 8 figure Gift Set pack, the 1986 series of figures were 16 years old.  Those '86 figures were considered vintage and were already commanding premium prices.  In 2018, though, the 2002 figures are still considered "modern" and most of them sell for a pittance.  That's the difference when a toy line only depends upon original, childhood adopters of a property to continue it's relevance. Hasbro's 2002 releases were a mixed bag.  At the time, they were trying to mix both JvC style figures along with vintage style figures in the retail offerings.  This lead to some great figure pairings as well as some clunker ideas.  One of the ideas that wasn't a great success was the 8 figure Gift Set that was given mostly to the BJ's Wholesaler line of stores.  (A few other chains were able to get some, but BJ's was the primary reseller.)  The set featured 8 vintage molds.  But, the character selection, accessory choices and packaging left many collectors dissatisfied.  Looking back, the set had some really nice repaints.  It had some really bad figures.  And, it had this all red version of Undertow.

Simply put, this figure makes no sense.  I can get behind a crimson diver as a general idea.  Hasbro, at the time, was hell bent on repainting every Cobra army builder in red.  And, while boring, it somewhat works to establish a cohesive army. But, this Undertow is just bright.  The red is so stark that there's nothing to break up the color in any way.  You just see this eye gouging red.  Under the water, the color might be more muted.  But, that doesn't help when the toy would be out of the water.  The grey highlights are too dull to really distract from the overall redness of the mold.  There's nothing to break the figure up and showcase the mold's details.  It's just a mass of color with no defining characteristics.

The biggest atrocity with this Undertow, though, was the figure's accessories.  Undertow did not include any dive gear...including his mask.  So, this figure is just meant for use on land.  If you can find some spare 2000 Undertow masks, they work great on this 2002 version.  But, those are not easy to find, either.  So, you're really left with a diver with no way to dive.  In addition to this omission, Undertow includes a massive Sound Attack chainsaw based on the 1985 Buzzer's weapon.  It's big and clunky and, again, makes no sense.  The figure also includes a black 1985 Snow Serpent backpack.  It's nice to get this pack in a color that can be used outside of the Arctic.  It doesn't work for Undertow.  But, it nice for use with the 2004 Cobra Troopers who lacked decent gear.  The final weapon is a 1992 Destro pistol.  I've never really liked this weapon. (Which is ironic as it was a huge draw when I first saw the 1992 Destro at retail.)  But, at least you can make a case that this weapon works with the figure.  Finding decent gear for this Undertow is nearly impossible.  And, the figure really isn't of the quality that justifies spending that kind of time and effort to outfit him correctly.

For me, this figure never really held any significance.  I had all the Undertows I wanted from the 2000 retail release.  I had no desire for a crimson version.  And, the lack of gear certainly doomed the figure.  As I was a completist at the time (more obsessively than I am, now) I wanted the figure and acquired him to check him off the list of figures I needed.  But, that was the end of my thoughts in regards to this Undertow.  The main thing this figure brought up was how the Undertow mold seemed a lot cooler than it is.  On the surface, the figure looks cool.  But, he's a poor man's Eel at best.  Even the Hydro Viper has substantially more personality than Undertow.  It's not that Undertow is bad.  It's just that other divers are better.

Looking back, though, this figure actually holds a lot of associated memories.  2002 was a pretty fun time to be a Joe fan.  The community was vibrant with many active communities: all with their own personality.  It was easy to find a place for any collector to fit in and be able to contribute.  Hasbro released a ton of toys to retail.  So, there was constant news about upcoming releases.  The community was engaged because there was a lot of content being created: be it by fans, licensees or Hasbro themselves.  The Joe convention turned into a mostly 3 3/4" affair in 2002.  In short, fandom came of age.  Must of the nonsense that would pop up in later years had yet to rear its head.  Collectors, generally, helped each other out.  Personally, I had a lot of friends from the collecting world.  It was, in my opinion, the best time to be a collector as vintage was plentiful and cheap and Hasbro was making some effort at getting products collectors wanted into their hands.  Even the divisiveness of the JvC sculpting style changed didn't have the long term detrimental effects that the switch to anniversary sculpts did in 2007.

The Undertow figure had a decent life.  He first appeared in 1990.  That figure is probably the best Undertow.  His grey, black and red coloring hearkens back to the 1985 Eel and works well in Cobra aquatic vehicles.  The 2000 version is also very nice.  The paint wipes can be problematic.  But, the blue coloring is a decent repaint of what was an obscure mold at the time.  During the 2000 release window,  the Undertow mold was changed.  Originally, the hose from the mask connected to a peg on the figure's chest.  It was then changed to a hole in the air tank.  It is not known why Hasbro did this.  But, all future releases of Undertow featured this mold change.  This 2002 release is far and away the worst.  The Undertow head was used for both the 2001 and 2002 Fast Blast Viper figures.  Then, in 2009, the club produced an Iron Grenadiers Undertow figure that was painted in the style of the 2005 Iron Grenadiers convention set.  It's an interesting figure and works well with his intended associates.  (It also has a red mask that might work with this 2002 version, but I've never attempted to see how close the colors actually are.)  But, the Iron Grenadiers lack any underwater vehicles so that Undertow version stands as a display type item more than a valued part of an army.

Upon his release in 2002, the Undertow got a bit expensive.  Collectors were bonkers over anything army builder.  And, as Undertow was somewhat difficult to army build (being part of an 8 figure set with only 2 army building figures), he commanded a premium for a while.  But, between 2003 and 2006, Hasbro released tons of better army builders.  And, large quantities of this figure became available from Asian sellers for a fraction of the cost of a local figure.  This dropped the Undertow's price to a couple of bucks or less for a figure.  Now, though, must of that surplus has dried up.  And, because the figure's accessories kind of sucked and so many of the figures were brought in from Asia, it's actually kind of a pain to find a mint and complete with filecard figure.  When you find them, though, you'll only pay around $6-$8.  That's still a lot for a figure that has terrible gear and isn't all that useful.  But, as a oddity of the era and a reminder of the army building craze that defined 2001 through 2004, this Undertow has a quaint charm. 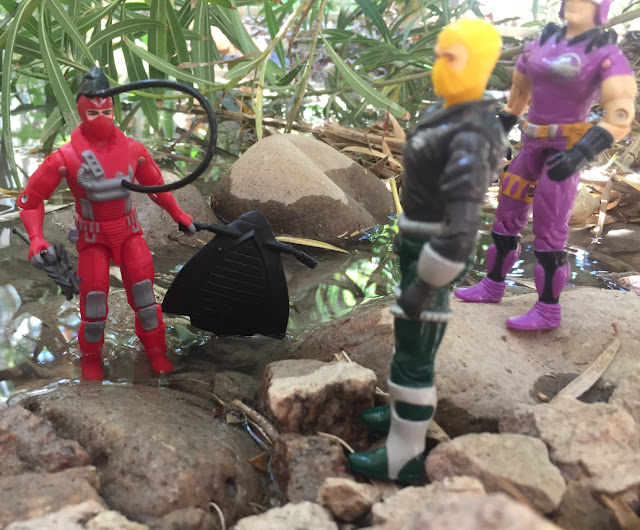 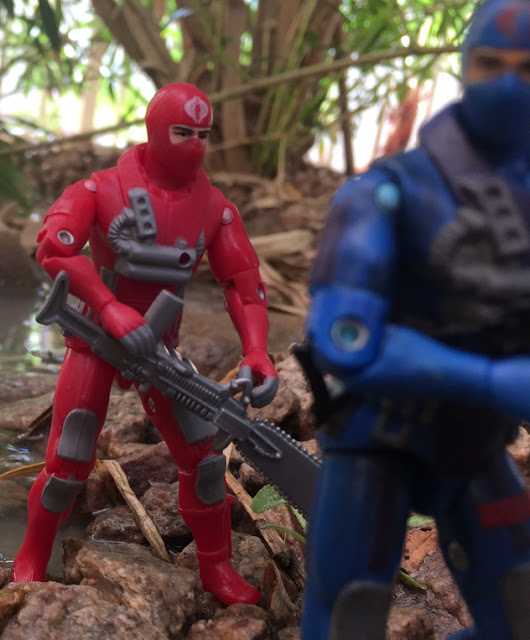 Posted by Robot_Sonic at 2:43 AM
Email ThisBlogThis!Share to TwitterShare to FacebookShare to Pinterest
Labels: 2002, BJ's Exclusive, Retailer Exclusive, Undertow