Timing plays an interesting role in life.  The time you were born heavily dictates your experiences and people who are, in the grand scheme of things, the same age, have vastly different formative experiences due to just a couple of years.  1987 was the final year that I played with Joes as a kid.  As such, many of my favorite 1987 figures get a pass on their flaws due to this nostalgic bent.  The figures I didn't like are more harshly judged than they are due as I feel they cheated me of something better at the end of my time to enjoy childhood play.  I look at the Joe line, though, and wonder how my view of it would be colored had things gone differently.  If the Iron Grenadiers had been introduced in 1987 instead of the odd lot of Cobras we did see, would they be the reason I collect and Cobra be an afterthought?  Had Shipwreck been released in 1987, would he be a laughingstock like Big Lob instead of the beloved character he is today?

Timing is crucial.  But, I think to attribute success or failure just to timing is lazy and irresponsible.  Part of timing is understanding the market you are trying to penetrate and putting a product out there that will attract the customers.  Sometimes, you are right.  And, sometimes, you are wrong.  Throwing things at the wall will always fail.  But, some of the best timed items still fail, too.  The 1987 Joe line was an example.  It was designed around the G.I. Joe movie.  But, that failed and was relegated to obscurity.  Rather than being a beacon for toy sales, it was an unknown afterthought that left many consumers struggling to understand some of the toy choices in the aisles that year.  Despite that, though, the 1987 Joe line still did quite well.  Many of the designs have withstood the test of time and have fallen into the second tier of Joe popularity with more than a few who have pierced the top tier as well.  Among the better toys from 1987 was a vehicle that, when reviewed in depth, was about as weird as anything else released that year.  But, the Cobra Maggot has managed to remain relevant and is still the best Cobra heavy gun that Hasbro ever released.

In a lot of ways, I consider 1987 my heyday of G.I. Joe.  I had bought figures in 1982, gotten distracted by Star Wars and come back full time in 1983.  I found the comic in 1984 and really started to grow my collection in 1985.  1986 introduced far more characters that allowed me expand my Joe forces in a way that they could better match up against the Cobra legions.  In 1987, though, I was at the height of my storytelling and it's these adventures which hold the vibrant memories.  1987, though, was also the end of my Joe adventures as I moved on to other things as the year ended.

But, in the year of 1987, I packed in a lot of play.  I had friends down the street who had a massive G.I. Joe collection, too.  Our backyard was primed for Joe adventures with many different places to play that had been "kidscaped" into Joe optimized settings.  And, I had a ton of figures from several years that were all in good shape and relatively complete.  In short, there was nothing really left wanting from a kid's play perspective.  With all those forces coming together, my Joe world evolved heavily through the year.  The primary catalyst for this was my acquisition of new toys.  I was mowing lawns and making plenty of money right as the new vehicles started hitting.

Usually, my course for Joe vehicles was smaller vehicles that had no driver in the early part of the year, vehicles that included drivers in the early summer, and, finally, I'd pick up the larger and slightly more expensive vehicles in the late summer early fall: leaving the flagship toys for my birthday and Christmas as the year ended.  The Maggot followed that pattern as I added it to my collection in the late summer or early fall.  It immediately became on of the stalwarts of my Cobra forces.  The front end of the vehicle could take out infantry as well as light vehicles.  The main cannon, though, was capable of destroying Joe bases.  And, as they could be fired from miles away, Cobra didn't have to be all that close to the Joes to wreak massive havoc.  In short, the Maggot could destroy the Joes while defending itself against the quick strike teams who would dispatched to destroy them.

Cobra had some nice vehicles.  They didn't get nearly as many as the Joes did, but their slate of mobilized weapons was fairly impressive.  They started with the Hiss Tank, went to the Stinger and then got aquatic with the Moray.  They went fast in 1986 with the STUN.  In 1987, Cobra got some heavier artillery.  Their main, new weapon from that year was a three part vehicle/playset that was, at its core, a giant cannon on wheels.  The Maggot brought a new level of inter-operability to Joe toys and showed some of the influence the success of the Transformers was having on ancillary toy lines.

For me, I mostly used the Maggot as separate vehicles.  If the entire 3 part mechanism was deployed, it saw use as a mobile command station where Cobra bigwigs could coordinate a battle.  The front part of the Maggot was used in conjunction with Hiss Tanks and STUNs to attack Joe bases.  The heavy cannon was capable of taking out Joe vehicles up to VAMPs and the smaller gun was useful against infantry.  Without the huge cannon in tow, the engine car was fairly fast and mobile: making it a formidable foe against the Joe forces.  I didn't often use the heavy gun.  I had my Joe bases dug into heavily fortified areas where it was difficult for the artillery shells to hit anything valuable or do any damage to the natural defenses.  It was a lazy way out.  But, having Cobra bomb Joe into oblivion wasn't that much fun when they could have a full frontal assault on a base that provided hours, if not days, of play possibilities.

One of the Maggot's great details is hidden.  On the back of the front tank is an engine cover.  Such things were commonplace on early Joe vehicles.  They were little things that enhanced the realism of the toys, even if they didn't make a ton of practical sense.  The details hidden under the Maggot's cover, though, were a bit different.  Here, you actually see the shells that would load into the rotating cannon on the other side of the car.  Usually, the notion of ammunition for the weapons on Joe vehicles was left to the imagination.  Here, though, the designers took an extra step to showcase how the large cannon would get its ammunition.  The fact that it's hidden is somewhat amazing.  No modern toy would take lengths to hide such detail.  It's a fun little Easter egg that is just another example of how the Hasbro designers made the Joe line so amazing. 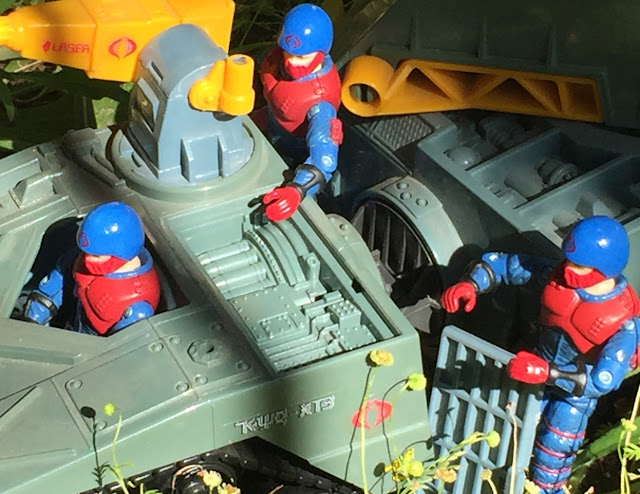 Maggots are somewhat tough to price for a couple of reasons.  First, the Worms figure can add quite a bit to the value.  If the driver has his antenna, you'll pay a premium for it.  (Though, in many cases, you're paying for the antenna and getting the Maggot for free!)  The radar dish on the gun is also easily broken.  A loose, mint and complete vehicle will run you about $25.  But, you'll toss in another $12 or so for shipping.  So, finding one locally for $35 is still a good deal.  If the radar dish is broken, the price falls precipitously.  You can get nicely conditioned Maggots in the $10 range and even cheaper if you find bulk lots.  And, note that there are a lot of reproduction radar dishes on the market as well.

To me, the value of the piece in in it's display capabilities.  Having something like the radar dish is only mildly important to me, especially on subsequent Maggots used for army building.  Sadly, though, mine have started to discolor.  But, that's a function of too many years stored in a hot garage.  But, this weapon still holds a place of prominence for me since it was the last great Cobra vehicle I bought at retail.  It would have made for an amazing repaint in the 2000's.  But, that never came to pass.  I suspect that some of the Maggot's disinterest among collectors is due to the non traditional Cobra colors and the bright yellow highlights.  But, this leaves a great toy as a relatively affordable option for collectors to use to augment their Cobra forces. 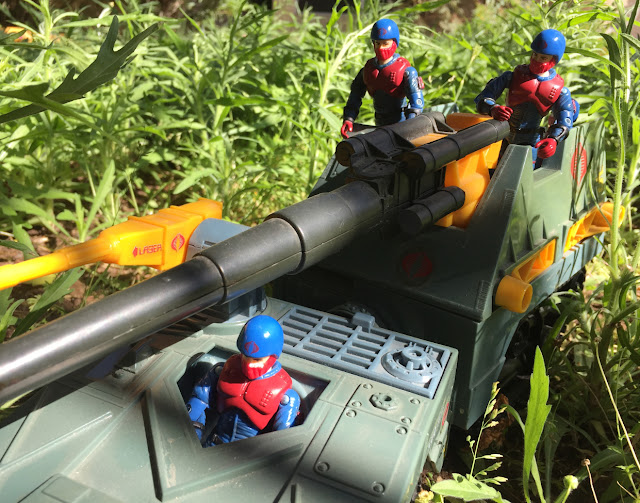 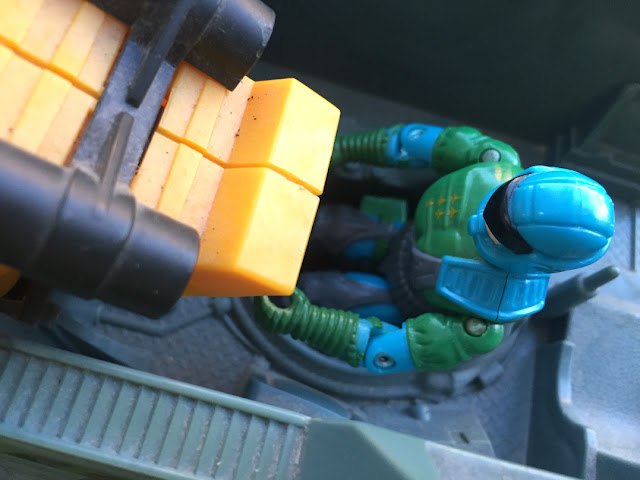 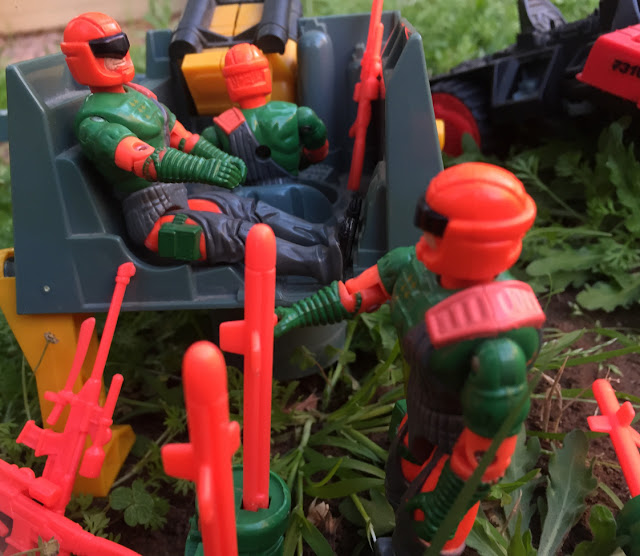 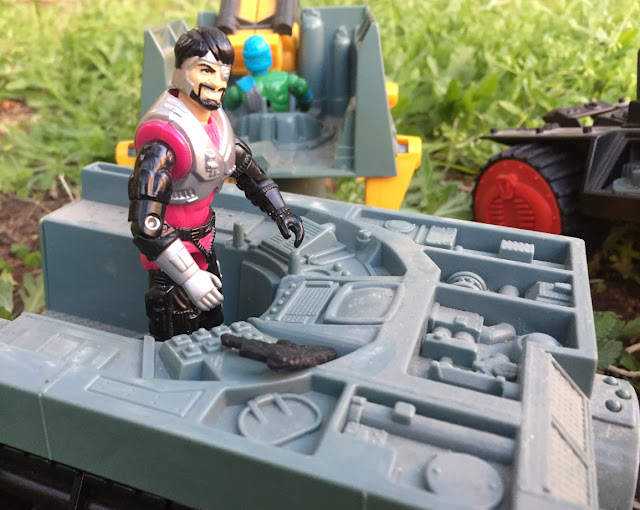 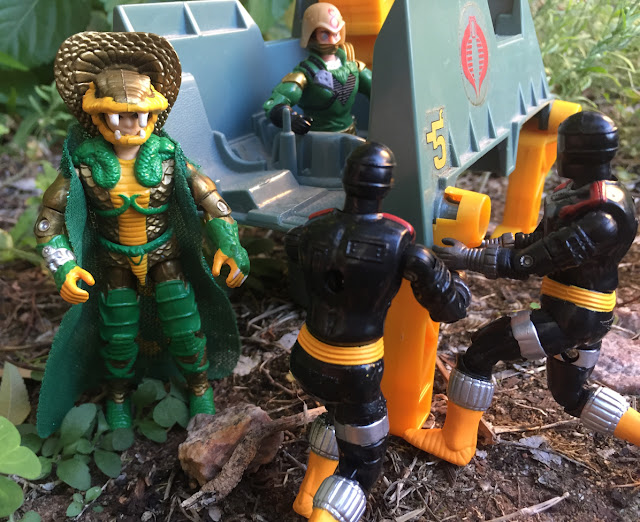 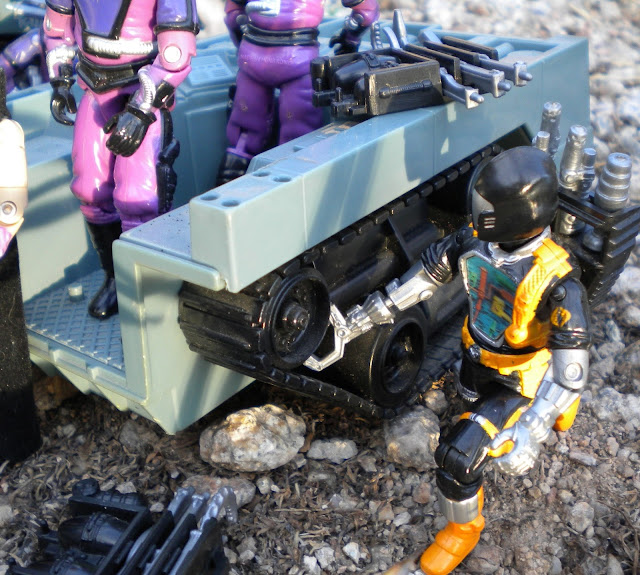 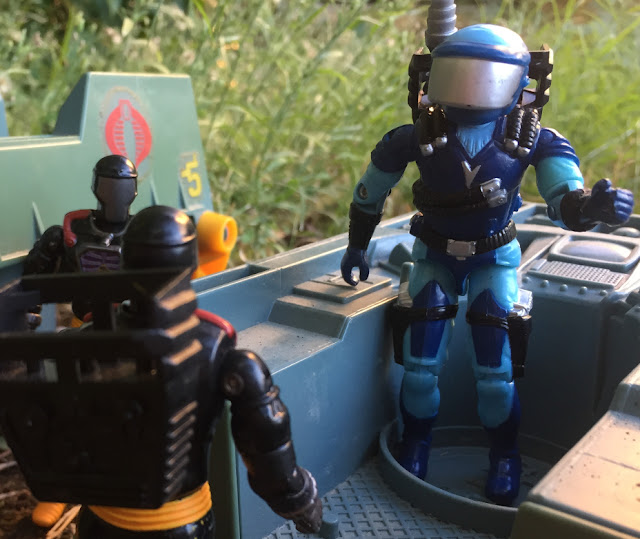 Posted by Robot_Sonic at 1:43 AM
Email ThisBlogThis!Share to TwitterShare to FacebookShare to Pinterest
Labels: 1987, Maggot, Vehicles, Worms