At the 2004 G.I. Joe convention, Hasbro showcased some upcoming Toys R Us exclusive sets.  One such set was the Desert Patrol.  This five figure set showed some promise.  It included the long missing 1991 Snake Eyes figure as well as a spiffy looking version of Stalker and Ambush.  (Though, with Low Light's head.  Tunnel Rat and the odd hybrid figure that would be named Dusty weren't all that exciting.  But, it was enough to get collectors interested.

When the set finally showed up at TRU in 4th quarter of 2004, there were a couple of small differences in the actually released figures.  In addition to Gung Ho being added to the set, the Ambush figure went from a solid cammo pattern (like Stalker) to a combo of the agave green and desert colors that matched Dusty, Tunnel Rat and Snake Eyes.  It took a solid set and turned it into a dud.  But, overall retail sales of the set were strong as Christmas of 2004 saw TRU sell out of most of its exclusive Joe products.  (That the set only had around 16,000 total units produced also helped.)

Today, the production set has actually gotten somewhat hard to find.  There is a ridiculously hard to find set of unreleased Desert Patrol figures, too.  But, these photos from the 2004 San Diego Comic Con show a set that still had promise before Hasbro made it worse.  This was a theme in 2004 and really carried into 2005 as the line died at retail.  The DTC offerings that used ARAH molds turned the tide a little bit.  But, it was too late.

You'll note that the photos below have a combo of what appears to be production figures as well as hand painted samples.  I am not aware of any full cammo Ambush figures actually making their way into the collecting world.  The version below could be hand painted or it could be production.  I can't tell from the old photos.  But, it is a massive upgrade over the figure that was actually released.  With the "final" Joe convention occurring this weekend, it's kind of sad to look back at a time when a convention meant seeing lots of cool, new stuff. 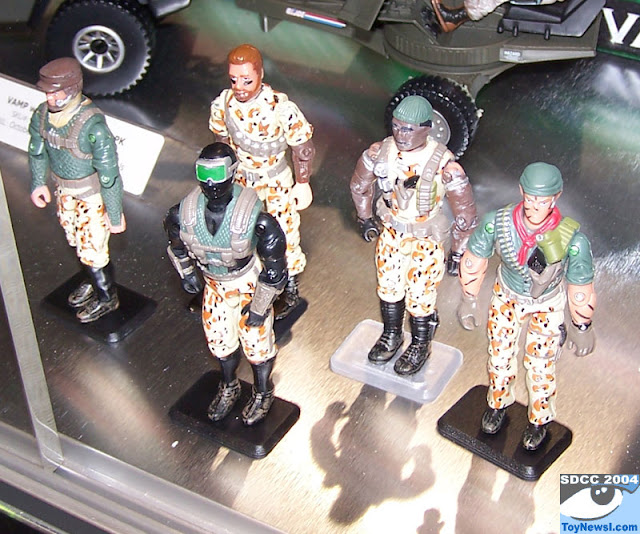 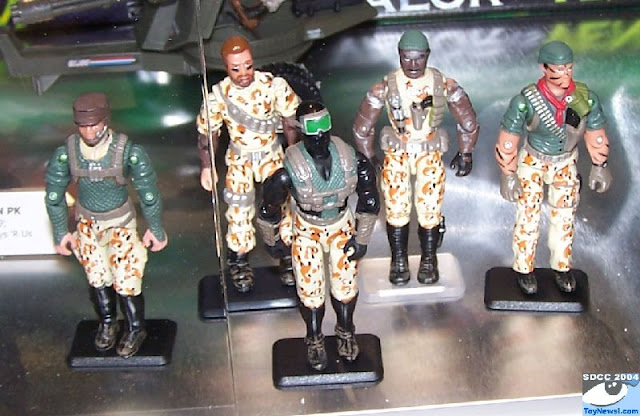