In the early 1980's, the European toy company, Palitoy, created a series of toys based on military adventure.  The fact that they coincided with G.I. Joe may have been insider industry knowledge or just pure coincidence.  But, the two lines debuted close enough together that the timing is a bit suspect.  The European line, though, featured 5 points of articulation, in the style of Star Wars figures that dominated the marketplace.  (And, coincidentally, were distributed in Europe by Palitoy.)  The line featured a fully integrated assortment of vehicles and playsets that augmented the figures.  And, in the second year, also featured a well thought out and developed bad guy.  In short, had G.I. Joe articulation (and Hasbro marketing muscle) not changed the landscape of action figures in 1982, it's possible that Action Force may have had a very different history.  But, Joe won the military action figure wars and the original Action Force line has become a bit of a cult favorite among Joe collectors.  For my look at Action Force in general, I chose the Arctic Assault figure as the subject of this profile.

Had I acquired this figure after August of 1983, I would have hated it.  At that point, G.I. Joe had taken hold and was now the only figure type that I really wanted to play with.  Prior to that, though, this figure would have found a tremendous home among my Star Wars figures.  Frankly, this figure is closer to the Hoth Rebel Commando that I always wanted than the vintage Star Wars figure is.  He would easily have joined my Hoth forces and fought against the AT-AT and Snow Troopers.  Now, he is also compatible with the current Star Wars figures that were available at retail just a few years ago (and, sometimes, still are!).  The 5 points of articulation figures that Hasbro has been peddling for the past couple of years are pretty much the same quality as Action Force figures.  Frankly, it would be kind of fun to see a 5POA line of Action Force inspired homages.  But, only if they retain the uniqueness of the originals and aren't a niche, kickstarter type thing.  You can see how the Arctic Assault figure stands up with a Hovertank Pilot released in 2017 below.  There's really nothing other than the '80's style eye paint that would tell you one figure is about 35 years older than the other. 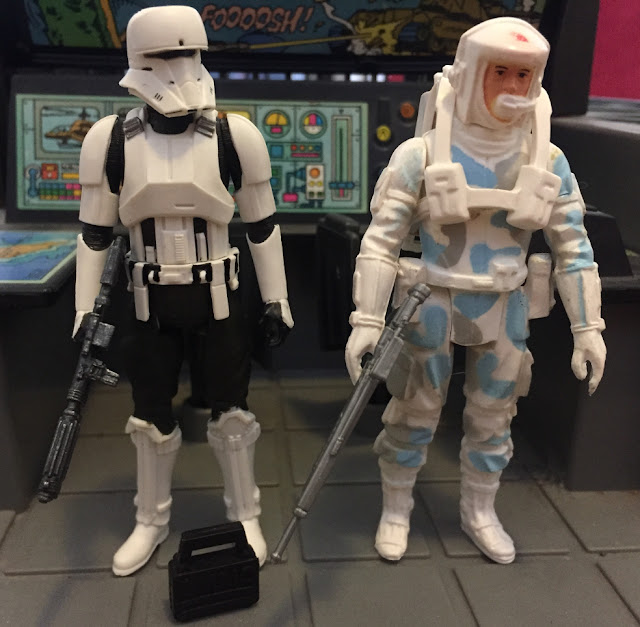 The figure itself is very detailed.  The suit is bulky (befitting arctic insulation) and is adorned with pouches, pockets and a detailed belt.  The boots are solidly sculpted, too.  The head features a comm device that is sculpted to the face (one less little accessory to lose!) as well as sculpting showing a helmet with a skull cap/hood underneath that exposes the figures's face.  The design was substantially stronger than what Kenner was doing at the same time with their Star Wars figures.  And, the added paint applications and accessories would have really made Action Force stand out among toys on the pegs in 1982.
For me, the real value in Action Force figures are the accessories.  The early figures all featured weapons exclusive to the Palitoy line.  While the backpacks are over the shoulder harnesses in the mold of the Kenner Star Wars accessory packs, the guns look very similar to Hasbro weapons.  The weapons are excellently detailed and scaled to work with Joe figures.  As such, I find they are a great way to accessorize Joes with different weapons that you don't see all that often.  Action Force featured weapons in a few different colors, too.  So, you get additional diversity from those changes.  The later Action Force figures featured recolored G.I. Joe weapons.  While the light blue Uzis aren't all that interesting, the black Zap bazooka from the Red Shadows figure is.  The whole line features an array of gear that is an excellent supplement to the Joe line.  And, since the figures tend to be inexpensive, you can acquire the gear for cheap prices to outfit Joes.
The Arctic Assault figure includes a few different items.  The first is a silver version of the SA-80 rifle that was common in the Action Force line.  This is significant as silver is a logical color for weapons that is very distinctive.  One reason for that, though, is because Hasbro didn't use silver as the color of their weapons very often.  Silver accessories didn't appear in the Joe line until 1985.  And, it wasn't until the 1990's that it become even somewhat commonplace.  Seeing the color on an early weapon really brings distinction to it.
Aside from the rifle, the figure also includes a white backpack and a white ladder.  The back is bulky and well detailed.  The fastening plastic straps are a design that works well, but also doesn't tend to withstand long childhood playtimes where they are taken off and put on again over and over.  They also hinder interchangeability as not all of them fit on all figures in the line.  The Hasbro design of the peg in back of figures allowed not only for greater uniformity and compatibility, but also lessened the wear on functional points of the accessories.  And, it was a solid step forward...even if the straps on this pack are more realistic.  The pack has a cargo slot into which fits a folding ladder.  I'm not sure of the intent of this piece of gear.  But, the fact that it folds up is pretty cool.  As a kid, things like toy ladders were necessary when playing on the stairs.  So, it's a cool addition to the line and the type of thing you don't really notice until you get one in hand.

Like most Palitoy offerings, this Arctic Assault figure's mold was used several times.  Aside from this white and blue winter offering, you can get the figure in desert camo or all white.  If you look on the package of the Arctic Assault, there is a version of the figure painted in green cammo carrying a black SA-80.  I can not find that this figure was ever released.  If you have knowledge of it, please let me know.  There are many variants in the Action Force line in terms of the way the faces are painted and even the cammo patterns.  So, keep your eyes open for those, too.  The head appears on a couple of other figures (notably the Naval Assault figure) as well.  There are lots of reused body parts in the Action Force line.  But, they experimented with different arm positions and such to a much greater extent than Kenner ever did with the Star Wars line.  And, you can find familiar pieces used in a variety of unique ways.

While Action Force does have it's pricey figures, the line is, in general, very inexpensive to collect.  (As long as you steer clear of the Hasbro G.I. Joe repaints, that is!)  Palitoy created a line for Western European children.  In 1982, the target populations for Palitoy's line in Europe and Hasbro's line in the U.S. were about the same.  So, this explains the large volume of toys that were made, sold and survive to this day.  Plus, Action Force only lasted for about three years before it, basically, became rebranded G.I. Joe.  So, the target market for Action Force childhood collectors is much smaller than that of G.I. Joe. As such, you can get mint and complete figures like this Arctic Assault figure for around $10.00.  Dealers will sometimes get $20.  But, incomplete figures are nearly worthless.  In lots, these go much cheaper and you're more likely to get the accessories.  You can usually find European collectors with spares, too, who might be willing to trade for Joes.  If this style of figures is something interesting to you, the cheap price makes them an attractive acquisition.  For me, they are fun additions to a collection.  But, they are not something I'm looking to complete.  But, getting a few spare accessories is a good way to arm some Joes with new weapons that look like they could be from the vintage line but definitely aren't. 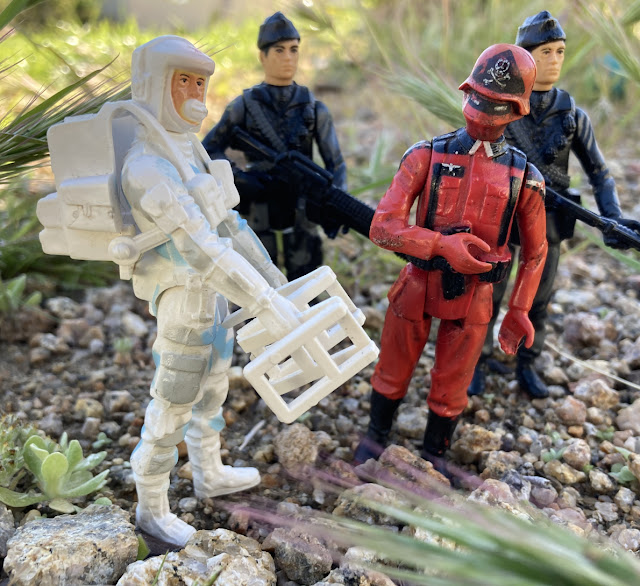 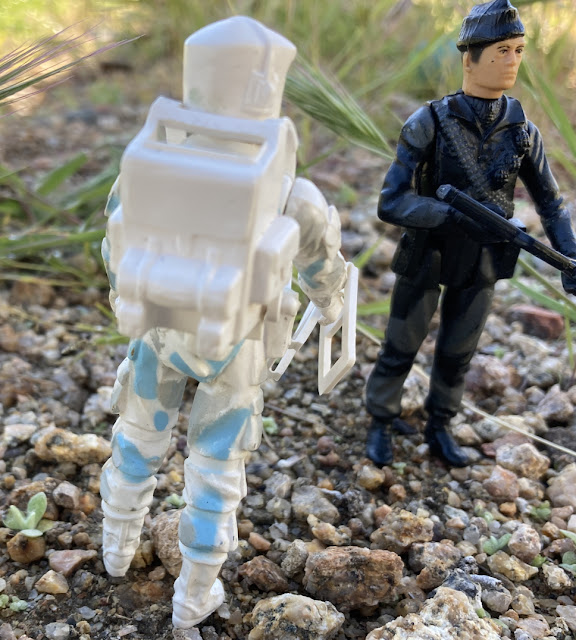