The A Real American Hero Collection (ARAHC) was Hasbro's resurrection of the G.I. Joe line in 2000.  But, though mismanagement, changing corporate priorities and general ineptitude, the line died at retail in 2001: less than 18 months after a strong debut.  Now, while this sounds like a failure (it was!) it should be noted that in 2002, Hasbro shifted to a new style of Joe sculpting.  As they felt that they were finally done with vintage G.I. Joe sculpts, Hasbro shipped off some recently used molds to Funskool.  Funskool quickly put some of these molds into production.  Collectors of the era were not overly thrilled as these new Funskool figures used molds that had, in many cases, pegwarmed in the U.S. and were generally loathed.  But, in a couple of cases, Funskool made something fun and slightly different.  One such example is the 2002 Funskool Law.

At its core, this Funskool Law is almost identical to the 2000 ARAHC release.  The brown color is very similar.  The white shirt is the same.  The big difference is that the figure's vest is also brown instead of the blue from the 2000 figure.  But, the biggest change is that Funskool painted a bushy mustache on Law's face.  When images of this figure debuted, the mustache quickly became the joke du jour.  It was a silly addition that made no sense.  But, it also was enough of a feature to allow collectors of the era to enjoy the figure as someone new.  (In the early 2000's, collectors had a lot of "rules" about Joes and who could be a character in their collection.  It seems odd, now.  But, it was a function of the fact that most collectors were new and had not had a chance to build up several versions of each Joe, yet.)  The fact that the figure quality was pretty good certainly helped, too.

I've always been a Law fan.  (I have never been an Order fan and don't really care for the dog as an accessory.)  Back in the winter of 1987, I took a few Joes out in the snow.   We had this battery operated 6 wheeled vehicle and two Law figures.  I gave one of them a Grunt M-16 from the accessory pack and had them be the bad guys who were chasing my Joes through the snow.  I don't know why that adventure sticks out so much as I never used Laws as bad guys again.  But, it was the start of seeing Law not as a character, but as a nameless, faceless army building MP who could be working for the Joes, working with the Joes or working against the Joes with some juggler.  It was a great way to get more mileage out of the Law figure.  And, as I was able to acquire more and more Law figures, the role of law enforcement grew in my collection.

There was a time when I had more versions of Law than any Cobra army builder aside from the 1993 mail away Snow Serpent.  While that's no longer the case, Law still retains a strong presence in my collection.  Having extra police around is always a useful thing.  And, figures like Law do allow for army building as well as realistic reasons for these figures to exist in multiples and all look alike.  And, with figures like law enforcement, the fact that they are supporting the Joes, but not the creme de la creme the military has to offer still remains within the realm of possibility.  So, often, my childhood play would revolve around the Joes capturing some Cobras, handing them over to the police, only for the Cobras to escape the lesser qualified personnel.

The value in figures like Law is that they were useful as quick filler stories when I had 20 minutes before school or just a few minutes between brushing my teeth and having to turn out the light.  The other upside is that corrupt law enforcement was always another angle to take.  So, Law figures might be fighting the Joes because they had been bought off by Cobra.  Or, more likely, they were working under the orders of a corrupt general who convinced them the Joes were the enemy.  A diversion from the standard Joe vs. Cobra dichotomy was a welcome fresh breath at times and was just another reason why I was able to focus only on Joe toys as a kid and never get bored.

The Funskool Law's gear is not good.  The figure does not include any of the excellent gear from the Hasbro releases of Law.  (The helmets on my figures are after market additions from spare 2000, 1987 and 1990 Law figures.)  Instead of his uzi and nightstick, this Funskool Law gets a terrible 1989 Deep Six weapon.  The real calling card of the gear, though, is the mission cards.  By 2002, G.I. Joe sales in India were sluggish.  In an effort to revive the brand, Funskool tried several different accessory gimmicks.  Along with the decoder cards from Law, there was an inkpad with Grunt, play-doh grenades with Metal Head and a parachute with Wild Weasel.  All of these were attempts to increase sales.  But, they didn't really work as Funskool stopped producing new figures in 2004 and was mostly done with G.I. Joe by 2005 or so.  The mission cards would be fun for a kid for about 2 minutes.  After that, they are just clutter.  But, when you know why Funskool created them, their inclusion makes more sense.

During their Joe run, Funskool had some rules to follow from Hasbro about certain figure designs.  In cases where the Funskool figure looks similar to an American release (like this Law), that meant that Hasbro cared about the character and wanted a uniform look across all figure releases.  In cases of radical departure from the source material (like, say, Big Brawler), Hasbro didn't care about the character and let Funskool do whatever they wanted to the figure in terms of color scheme.  This is why you'll see an odd mix of Funskool figures where some are true to their roots and others are bright diversions that heavily stray from any existing view of a character.

Law had a good run.  The figure was released in 1987 and got an awesome repaint in the Sonic Fighters series in 1990.  The figure was rumored to be one of figures to be included in a desert themed 1998 repaint of the original G.I. Joe Headquarters.  But, Hasbro could not make that happen.  So, instead, Law appeared in 2000 as an inaugural member of the A Real American Hero Collection.  He was carried over to Wave II of that line in 2001 and quickly backed up at retail around North America.  Hasbro shipped the mold off to Funskool where this figure debuted in 2002.  No major variants of Funskool Law have been found and the mold died in India...not even returning in 2009/2010 when Funskool launched a small resurgence line of Joes to accompany the G.I. Joe movie.

A few points on the figure.  The card art, shown below, features law with a Beach Head rifle and an unidentified pistol.  The Beach Head rifle was a piece of gear that was always welcome and it's a shame that this Law figure didn't include it.  The other point of note on the figure is the black armband.  On the US figure, this is emblazoned with an "MP" to denote Law's specialty.  The Funskool figure, though, just features a black armband that makes it appear that Law is grieving for the loss of some Joe team mate.  It's one of those things that doesn't seem all that important upon first glance.  But, once you see it, the black armband becomes a defining feature of the figure.

Funskool Laws were somewhat popular at the time of their release.  While 2000 Laws were still hanging around if you looked hard enough, the reality is that the figure is a solid army builder and collectors of the day did buy up items that could be used in that capacity.  So, while many of Laws contemporary releases have climbed to triple digit purchases, Law remains cheaper.  But, that doesn't mean inexpensive.  You can get carded Laws for $50-$60 which is a dozen times higher than the retail cost from 2002 - 2005 or so.  Loose figures sell in the $20 range.  But, finding them complete can be challenge since he includes so much paperwork.  For those prices, buy extra 2000 Laws and hand paint a mustache on some.  You get a better figure with a head of about the same quality.  And, you get better gear to boot.  But, as an oddity, the Funskool Law is a good way to expand your Joe police force.  You just need to get them some better gear. 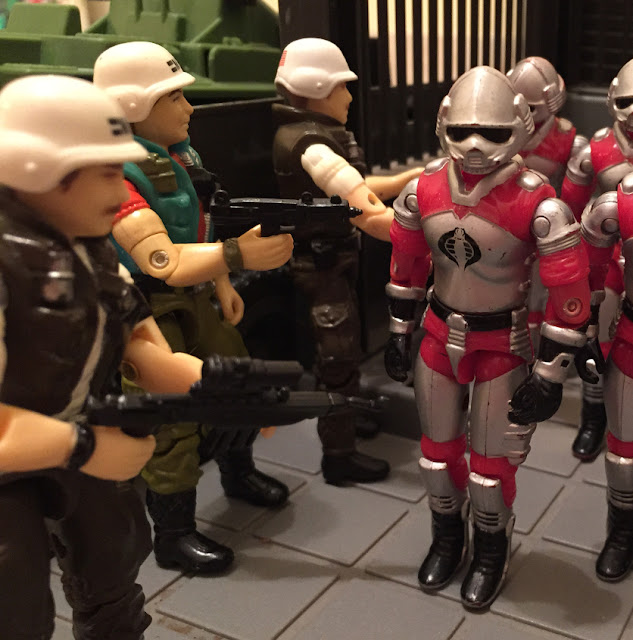 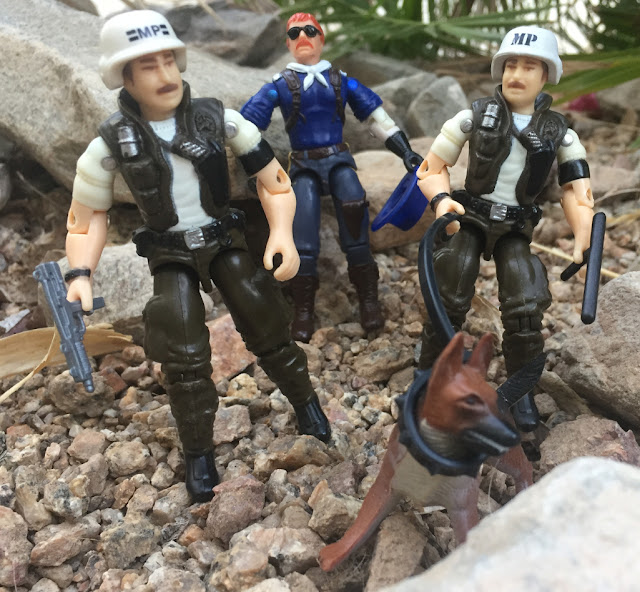 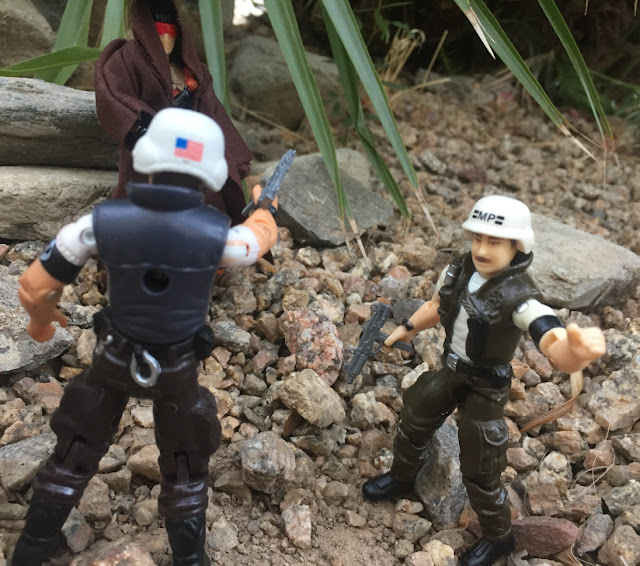 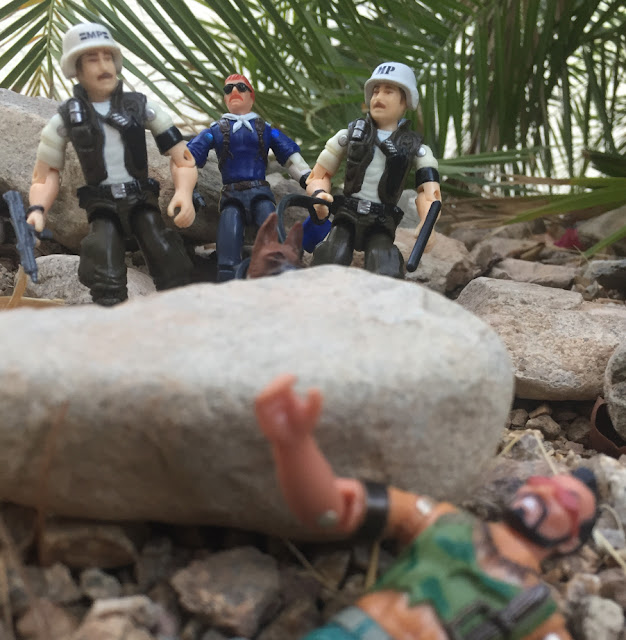 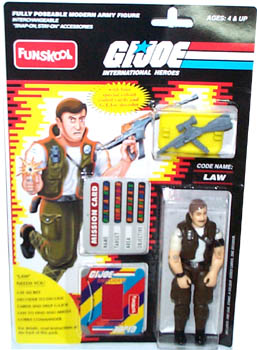 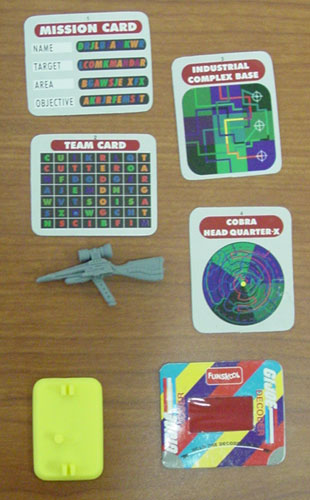 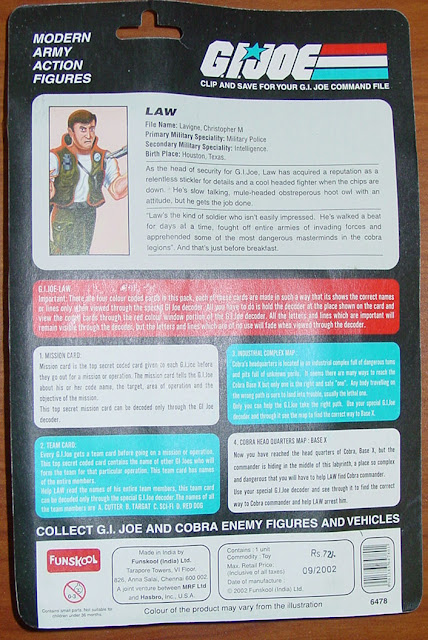 Posted by Robot_Sonic at 2:43 AM
Email ThisBlogThis!Share to TwitterShare to FacebookShare to Pinterest
Labels: 2002, Foreign Figures, Funskool, Law