In the fall of 2002, an odd figure appeared for sale from Asian sellers.  At the time, it was known that a slight Snake Eyes repaint was going to be released in a boxed set as a Toy Fare magazine exclusive.  But, this new Snake Eyes was purple in color.  It was not known if this was an unreleased paint variant or something new.  Collectors, though, saw the resemblance to a cartoon episode Snake Eyes and wanted the figure badly enough that the early releases sold for over $100.  (At a time when that much would get two carded Satan figures or 2 Stardusters and 2 version D Steel Brigade figures.)  Supply, though, eventually outstripped demand and the figure's price fell.  Plus, it was revealed that the figure would appear in a DVD boxed set as an exclusive.  Collectors got their figure and the DVD Snake Eyes fell into obscurity.  Now, more than 16 years later, the world can go agog over a new purple Snake Eyes figure.  This one, though, is a remake of the classic 1985 Snake Eyes produced by Black Major.  And, it is a beauty of a toy.

Technically, you can't call this figure Snake Eyes as he's stamped with a silver Cobra logo.  You could make a case to call him a Cobra Mortal since one of his contemporary releases mimics that character.  He could also be Lobisomem since that character used the Snake Eyes mold and was a Cobra.  But, it's probably more apt to refer to him as a Cobra Invasor.  Invasor used the V1 Snake Eyes mold.  There's no logic to dictate that he would have been updated to a V2 mold.  But, why not?  The Invasor character could co-exist with the Cobra Mortal since both used the same basic uniform.  So, I'm going to see this guy as an Invasor.  Invasors are troopers, according to their South American origins.  But, I see him as a character.  I'm not huge on the Invasor concept as it exists on filecards.  But, I can use this figure as a character named Invasor and he does fit nicely with 1990 Night Creepers as a better leader of that enemy faction.

Beyond that, though, the figure just looks cool.  The purple is a great background color for the black and silver highlights on the figure's chest, arms, waist and legs.  You'll notice that the grenades on the Invasor's chest are painted grey, offsetting them from the black bandoleer.  There are more paint applications on this figure than the original Snake Eyes and they bring forth the sculpt's details in ways that decades of black obfuscation never could.  To me, these new colors highlight both the highs and the lows of this Snake Eyes sculpt.  You can see the exceptional 1985 design.  But, you also see the oddly shaped mouth and the slight pot belly.  These don't take from the memories or my fondness for the 1985 Snake Eyes figure.  Instead, they enhance it since I have more ways to enjoy it, now.

Accessory wise, this figure includes remakes of the full complement of 1985 gear.  You get an Uzi, sword pack and even a painted wolf.  I was never a fan of G.I. Joe animals.  And, to this day, I have zero interest in Timber as a character or an accessory.  But, lots of people love the the non-human sidekicks.  So, Timber's inclusion here is worthwhile.  (And, check out those yellow eyes!)  The gear is solid, but not as sturdy as vintage Joe gear and is easily discernible from originals.  The pack is the point of interest for two reasons.  The first is not a good one, though.  There was an issue with the sword holster on the pack and it's too small for the sword to fit into it.  So, all the Invasors and Mortals lose the ability to nicely lug their sword around.  The second reason, though, is cool.  The pack has some painted details.  There are grey patches in the middle which help illuminate the black pack from the darkness and showcase the details far more finely than the all black versions that exist.

The quality of these Snake Eyes figures is fairly strong.  They have nice, tight joints and will hold a pose.  Those that I have will all easily hold weapons in their right hands.  But, the left hands are tight and I have yet to get a weapon into one.  The left legs of the figures will flay out a bit from time to time: especially when you try to pose the figure on top of a boulder in a slight breeze as you race against sun down to get a good photo.  There are various fixes for this and the flay is no where near as bad as that of 2010 era Cobra Troopers.  The paint is crisp and sharp.  And, the plastic quality is very high.  Both Black Major and Red Laser's Army have upped their game for 2018 and it shows in the designs, materials, accessories and construction of their figures.

The version 2 Snake Eyes sculpt is, arguably, the most famous design in the vintage line.  Even as a relatively common figure, mint and complete versions still fetch over $70 due to the popularity.  This is because it is Snake Eyes, it was released in 1985 and, this look for Snake Eyes was never replicated or updated in the repaint and subsequent Joe eras.  There is only one other use of the mold: the Brazilian Lobisomem figure.  And, this character is a near identical match for the American figure.  With no mold saturation, the V2 Snake Eyes has taken on a mythic status and has been one of the most requested updates from factory custom makers for a long time.

Currently, this figure is available for around $18.  Black Major figures can sell out and take on aftermarket lives.  But, this Snake Eyes is polarizing.  The mold in purple and with a Cobra logo is not for everyone.  Visually, the figure is spectacular.  But, not everyone appreciates the visuals of a figure over its utility and place in the Joe pantheon.  Plus, there were 9 Snake Eyes repaints made available at the same time with more soon to follow.  This leads to a short term mold saturation as collectors frantically try to sort which paint jobs they want and which are superfluous.  Longer term, though, the initial onslaught sorts itself out and figure molds that are no longer available get more desirable.  While this purple Snake Eyes has a novelty factor and is somewhat silly, it is also serious and grounded in some Snake Eyes appearances.  Depending on the production numbers, the figure could prove difficult to track down in the future.  But, the oddball design could also limit the demand.  (Most of the Steel Brigade and Cobra Trooper repaints of 2017 have dried up.  But, they haven't taken on huge aftermarket appreciation since the demand is still soft.)

Personally, I couldn't wait to snatch this figure up and add him to my collection.  The vibrant colors and rarely used mold all add up to the perfect fit for my collection.  In time, I'll grow tired of seeing the V2 Snake Eyes mold used as a bad guy in a rainbow of colors.  But, I found the initial wave of offerings to hold several brilliant pieces that are worthy of acquisition.  If you look back at the Black Major Invasors and Mortals from around a decade ago, most of their designs have held up and retail the uniqueness of their original release.  They have also taken on quite an aftermarket desire.  It's unlikely that the Joe world in 2029 will look anything like the 2019 version.  But, this Snake Eyes repaint is something I will enjoy for a long time: just because it is so different. 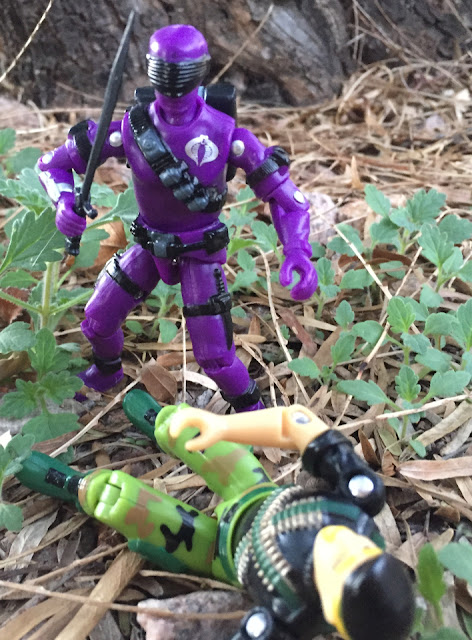 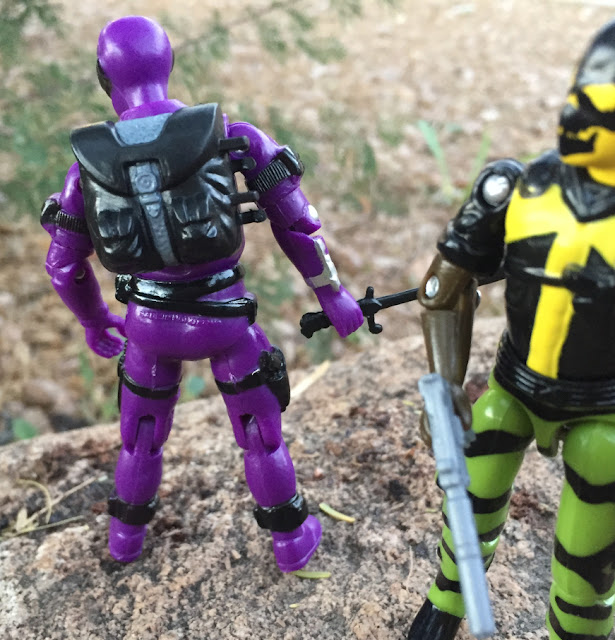 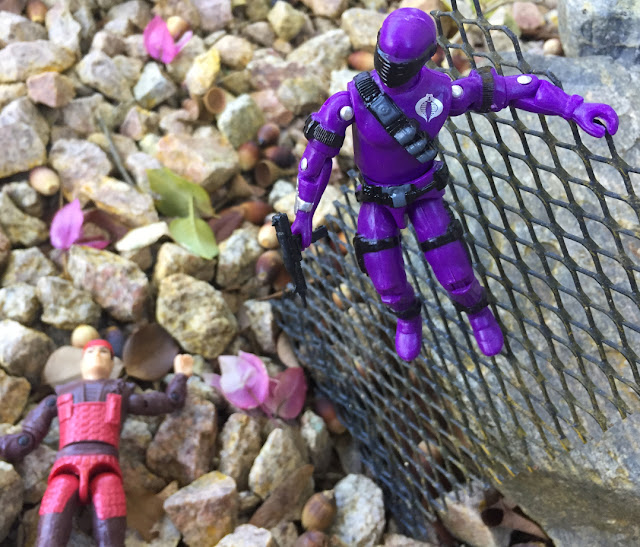 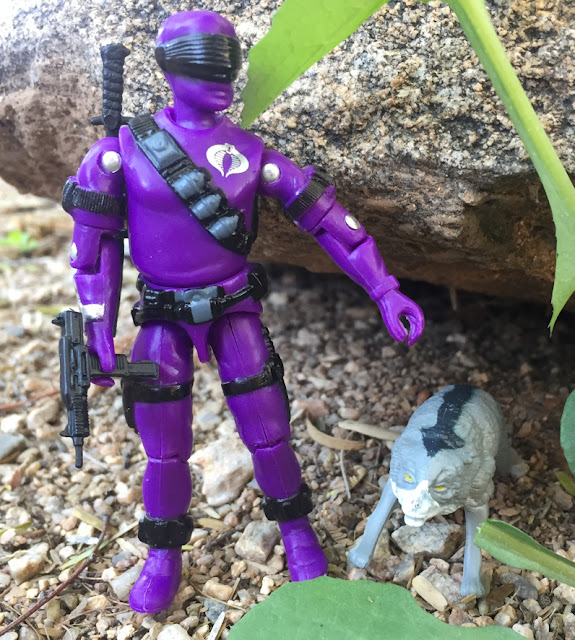