Eventually, I'm going to run out of figures to review.  There was a time when Hasbro pumped out more new figures than I could possibly keep up with.  But, they haven't made vintage style Joes for retail release in more than a decade (aside from one crappy Snow Job repaint) and haven't produced even a collector themed Convention exclusive is more than 6 years.  So, I've been catching up.  While there are still tons and tons of figures which I haven't looked at, my current collecting focus is heavily based on my childhood recollections.  Which leads us to today.  The 1983 Snake Eyes is certainly one of the most iconic G.I. Joe figures ever made.  The all black base with a masked visage created a character for all time.  He is not "forgotten" at all.  But, to me, this figure was not an overly important part of my childhood.  Snake Eyes as a character was not really relevant until the 1985 figure entered into my collection.  But, this original design for Snake Eyes was still around and had a few memories forged around it.

G.I. Joe entered my childhood in October of 1982 when my younger brother got most of the released toys for his birthday.  Prior to this, I was focused solely on Star Wars figures.  But, these new G.I. Joe figures offered cooler accessories, better vehicles and added articulation.  After playing with my brother's toys for a while, I wanted G.I. Joe for my birthday and Christmas that December.  My birthday was disappointing, though.  I only got the RAM.  A day after my birthday, though, a friend who had been sick for the party dropped off my present: a Breaker figure.  So, I had something to hold me over.  Christmas proved a bit better in the Joe department.  My existing RAM was joined by a VAMP (our second as my brother already had one) and an MMS.  Both toys included figures, so I had three Joes and three vehicles.  Also under the tree, though, was a single, carded figure: the 1982 Snake Eyes.

Upon opening my Joes, I now had three vehicles and 4 figures.  However, I had a dilemma.  Breaker was the sole operator of the RAM.  While I tried to put a second figure onto it, that was problematic and was more hassle than the play value afforded.  The VAMP's two seats were occupied by Clutch as the driver and Hawk since it was his MMS that was towed behind the jeep.  This left Snake Eyes out in the cold.  He had no transportation.  I tried him as second fiddle on the RAM.  I then attempted to have him sit on the back of the VAMP, somewhat manning the gun.  Again, though, this proved frustrating as he got in the way of play for the VAMP.  So, Snake Eyes was the odd man out.

However, this proved somewhat fortuitous.  It turns out that after Christmas of 1982, we had three Snake Eyes figures in our house.  My younger brother had gotten one in October and my youngest brother had also gotten a Snake Eyes under the Christmas tree.  In looking at the trio of all black, hidden face figures, I found my enemy.  These Snake Eyes figures became the villains to my Joes.  (I wouldn't see any Cobras in any neighborhood collections for several months.  And, by that time, I didn't really care as I was full bore back into Return of the Jedi figures.)  In early 1983, I acquired two Battle Gear packs.  With these, the Snake Eyes army could be outfitted with M-16's, M-60's and even laser rifles to help battle the Joes with more diverse weaponry than just their Uzis.  Through winter and into the early spring of 1983, Snake Eyes was the enemy who would capture, kill or be killed by the Joes.

This dynamic, though, was short lived.  1983 was interrupted by Star Wars and I completely abandoned my Joes from around April until well into July.  When Star Wars played itself out, though, and I found myself enthralled by the new, 1983 Joe releases. Snake Eyes was no more.  Now, I had access to real Cobras.  I didn't need the contrived enemy of Snake Eyes figures any longer.  (Plus, more than one had now suffered broken thumbs from the variety of weapons forced into their hands.)  With this, Snake Eyes perished as a viable member of my collection.

In the early summer of 1984, though, G.I. Joe #26 came out.  I read the issue at school and was hooked.  I found issue #27 at a local drug store in the first weeks of summer vacation and subscribed to the comic that day.  This story made Snake Eyes valuable.  And, as I searched out a Stormshadow figure as the year wound down, not having Snake Eyes as a foil was problematic.  I found the old Snake Eyes figures.  But, even the one that was unbroken was straight arm.  Now that I had swivel arm figures, straight arms might as well have been Kenner or Fisher Price toys.  They simply weren't compatible.  How could Snake Eyes fight a better articulated Stormshadow?  And, thus was born a dilemma.  At the time, I'm sure I could have found a swivel arm Snake Eyes had I wanted one.  But, there were so many other, newer figures to be had that I somewhat ignored finding Snake Eyes at retail.  December of 1984, though, ushered in G.I. Joe #31 where Snake Eyes showcased his commando skills.  I now needed a figure.

Fate, though, intervened.  My friends down the street discovered their Christmas presents hidden in their parents' room.  We sneaked in and found the carded Dreadnoks that had been released early at Sears.  On the back, plain as day, was a new Commando figure that solved the Snake Eyes dilemma.  The thought of getting an old figure was completely out the window as Snake Eyes would be handled by the 1985 figure.  (Finding a 1985 Snake Eyes would be somewhat problematic for a while, until I found an unopened case of them at Toys R Us the Friday that Spring Break began in 1985.  None of my friends would get one for many more months and even resorted to ordering figures they already had from the Sears of JC Penny catalogs just to get a Snake Eyes.)  This revelation ended the original version of Snake Eyes in my collection.

When I returned to collecting in the 1990's, I didn't start as a completist.  I was more focused on filling holes of things I thought were cool or I hadn't owned as a kid.  I didn't have much interest in the 1982/3 Snake Eyes as I had the '85 and an '89.  Both of which, in my opinion, were far superior figures.  In December of 1997, I found the Stars and Stripes set at Toys R Us.  With this purchase, I had a V1 Snake Eyes figure that was better painted than the original.  As Hasbro repainted this mold a few more times, there was no real reason to care about the original release.

Eventually, though, nostalgia reigned and I wanted a complete run of swivel arm figures from my prime collecting years.  (To this day, I don't care for straight arms and don't really keep any in my collection.)  I acquired an '83 Snake Eyes again.  Frankly, owning a nice version reminded me of how cool the figure and the character are.  Despite using the standard 1983 chest and arms, Snake Eyes does feature unique legs.  He has a bomb molded onto his left leg.  This distinguishing feature is both a nice way to set Snake Eyes apart, but also shows that he is a very deadly member of the Joe team.  It's a subtle reminder that Snake Eyes was a commando before he was a ninja.

The Snake Eyes mold was a world traveler.  He was released in the U.S. only in the 1982/1983 incarnation.  Palitoy released a slightly repainted Snake Eyes as Stalker (the Panther jeep driver) in their Action Force line.  The straight arm Snake Eyes, though, was much more traveled.  He appeared in Argentina, Brazil and Mexico.  In both Argentina and Brazil, he was given a silver Cobra logo and released as Cobra Invasor.  His head was used for the infamous Brazilian Cobra de Aco and his entire body was used for both the Plastirama Cobra Mortal in Argentina and the Rubiplas Cobra Mortal in Venezuela.  The swivel arm version showed up again in India in the 1990's where Funskool released a blue variant and a version with silver highlights.  He was also the original Street Hawk figure with silver highlights and a black helmet.  Hasbro started releasing the mold in 1997 and used it no less than 6 times, with the head making an appearance on a Snow Job body in the first wave of 2004 Comic Packs.  (Hasbro also made a new head for a 2005 release.)  All of the Hasbro figures were, basically, black with the lone blue DVD exception.  If you want an oddball Snake Eyes figure, there aren't really any options.  The Cobra themed oddities and blue Funskool figure are among the rarest and most expensive G.I. Joe figures in the world.  But, V1 versions in a base black body are now very easy to find if you only want the look and not the collectible.

The basic black look with painted highlights gets old and it would have been cool to see Snake Eyes in desert colors or Action Force green.  A dealer tried to get Funskool to produce a Snake Eyes based on the original artwork with cammo pants in 2003, but it never came to be.  Around 2010, though, the Black Major bootlegged the Snake Eyes mold.  He repainted it into dozens of combos.  The vast majority of them were flavors of the Cobra Invasor, De Aco or Mortal and many are exceptionally good.  (You'll see both a Red Shadows Invasor and a blue Mortal floating around in the pics on this site.)  There are also desert Snake Eyes figures along with many other colors.  These helped fill the gap in the Hasbro banality and give Snake Eyes collectors even more to track down.

Being an iconic version of the most famous G.I. Joe character that was released in the line's first years has left this 1983 Snake Eyes as a pricey figure.  Dealers will often sell the figure for $50.  Left to the open market, the figure is readily available and sells in the $30-$35 range for a mint, complete with original weapons and filecard version.  (Watch out for Battle Gear weapons as many sellers mistake the lighter gray accessory pack weapons for the charcoal originals.  You'll also often see the '82/'83 Snake Eyes with the easier to find 1985 Snake Eyes Uzi.)  If you want to skip the filecard, or don't mind the Battle Gear weapons, the price falls rather precipitously.  (No paint to wear out on the figure sure helps up the supply of mint versions of him!)   As there are lots of options for Snake Eyes figures with better highlights and the same gear, spending a lot may not make sense if you have no emotional attachment to the figure.  But, if you do, the price could be a lot worse than $30.  So, he's at least somewhat affordable. 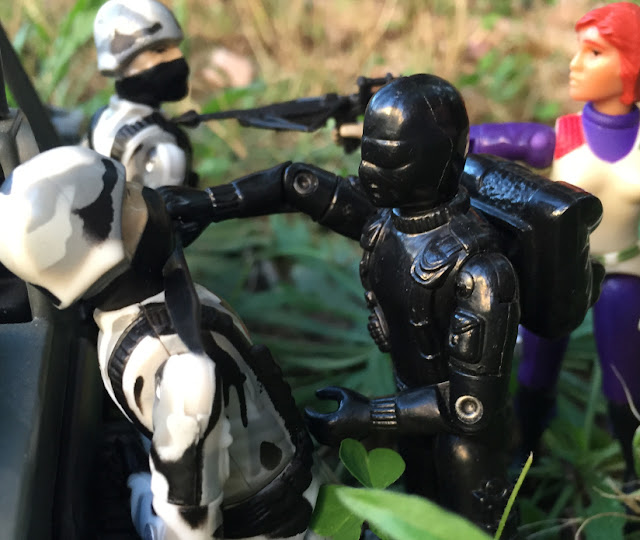 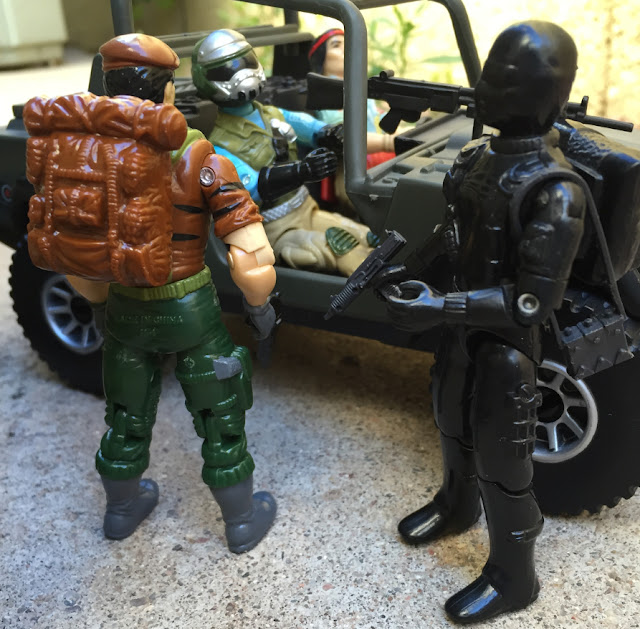 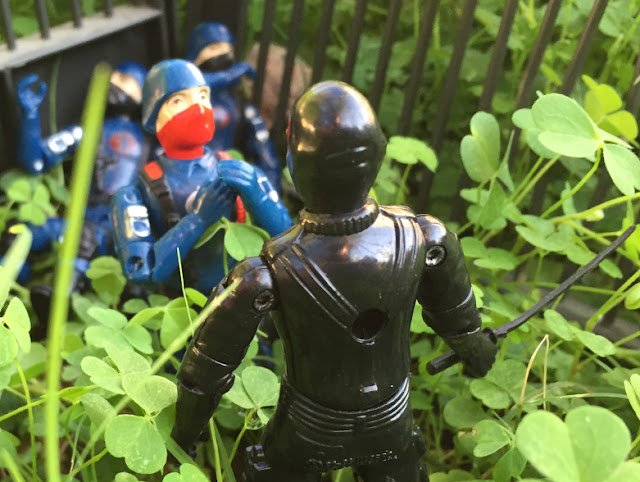 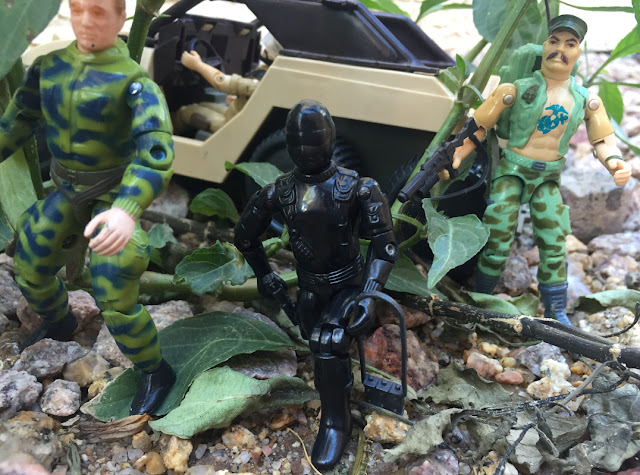 Posted by Robot_Sonic at 2:31 AM
Email ThisBlogThis!Share to TwitterShare to FacebookShare to Pinterest
Labels: 1982, 1983, Original 13, Snake Eyes