While there are lots of unproduced vintage G.I. Joe items, two sets have been widely known and sought after since the line's cancellation in 1994.  The first is the Manimals.  While they aren't most people's cup of tea, their unproduced status made them legendary and collectors who hate Star Brigade were still driven to seek out a Manimal.  The second set is the Ninja Commandos.  This planned 5 figure subset was going to be released in 1995 and got very close to seeing production.  Production level sample figures exist in the community.  And, toy magazines of the 1990's had photos of carded mock ups.  (Rumors that thousands of cases were produced, but not released persisted into the late 2000's.  But, they have never proven to be true.)  Unlike Manimals, though, much of the Ninja Commando tooling was actually used in 1995.  It was just not used in the now defunct G.I. Joe line.  Instead, the parts found use on various figures in the Mortal Kombat Movie line.  But, one figure in that line was more than a use of parts originally planned for the Joe line.  The youthful version of Shang Tsung was a straight repaint of the unreleased Ninja Commando Budo from 1995 and has remained a sought after supplement to many Joe collections.

In the mid 1990's, I was on a crusade to find any bastions of Joe figures that were left at retail.  In general, this required a lot of time and resulted in little reward.  This was due to the fact that most of the figures that you could find from the standard, retail line were the same figures over and over again.  So, once I acquired a Dr. Mindbender, I had no desire to buy him again, even though I'd find him at several stores.  It was also due to the fact that I simply disregarded any Street Fighter, Ninja Force or Armor Tech figure as a viable option for my collection.  These figures were not the standard construction of my childhood Joes and I had no interest in acquiring them...even if they were the only Joes left at retail.  In my toy store sojourns of that time, though, I would only look at one other toy line: Star Wars.  So, there was zero chance that I would run across these Mortal Kombat Movie figures.  Even if I had, though, they would have been dismissed for the same reasons as Street Fighter and Ninja Force.  It's possible that I would have acquired a Guile repaint or two, especially had I come across the Arctic Guile that used the Blizzard Body that would have been familiar to me.  But, as my stops in the toy aisle were limited to dwindling G.I. Joe shelf space and expanding the Star Wars aisle, I never saw these Mortal Kombat figures at retail.

But, I don't feel I really missed out on much by not finding this figure at retail.  The non standard construction and martial arts theme are a lethal combo that kills my interest in a figure.  Even as a kid, I was never big on Ninjas.  Stormshadow was fun for a while.  But, his swords were more of a novelty than anything really dangerous.  Stormshadow saw more use as an infiltrator or assassin than a ninja.  Quick Kick and Jinx never mattered to me. And, Snake Eyes was simply a commando who happened to also have a sword.  The bulk of both the figure and his accessories would have been a detriment to display, especially since the larger scale would have looked out of place were this figure opposing one of my childhood figures from the 1980's. While it's generally true for me that more figures are better than fewer figures, there are some who just don't really offer anything and would have been nothing more than newer cannon fodder.

Shang Tsung includes three accessories: a large bladed weapon that was included with many other figures, a hooked, double bladed sword and a unique helmet.  It's likely that the Ninja Commando Budo would have included a dark green weapon tree full of various martial arts weapons that were common with Ninja Force figures along with some newly sculpted parts.  The weapons included with Shang Tsung were not part of that tree and were chosen specifically for this release.  (They were also included with many other Mortal Kombat Movie Edition figures and were likely produced in large quantities to reduce the cost of the figures.)  It is likely that the helmet, though, was designed to be included with Ninja Commando Budo.  It is unique to this Shang Tsung figure and is a fun addition that gives the figure more life.  It is well designed and fits the head very nicely.  It is also the most often missing piece of Shang Tsung's gear and is a piece whose absence makes the figure weaker.

Another cool element of the Mortal Kombat Movie figures is that they featured packaging that was similar to what G.I. Joe would have been in 1995.  The mock up carded Ninja Commando figure features a full display bubble just like that of the Mortal Kombat Movie figures.  While this is a drastic departure from the traditional side carded Joe figure juxtaposed from his card artwork, it is also visually striking.  I find myself hesitating to open carded Mortal Kombat figures because the card presentation is so nice.  (But, the beat up, bend cards help make that easier.)  You can clearly see the figure and most of his gear.  But, you keep some unique elements to the figure.  This Shang Tsung oddly features the artwork from the old man version of the character.  (Which is a different figure in the Mortal Kombat Movie line.)  It's much smaller than traditional Joe artwork.  But, it kept the homage to Joe's roots and would have been a cool way to showcase the 1995 G.I. Joe figures had they actually been released.

Shang Tsung figures have typically been more expensive than the other Mortal Kombat Movie figures of equal availability.  It's relatively easy to find a loose figure with no accessories.  Complete figures are tougher to come by and will run between $20 and $25 depending upon how well the figure is labeled.  But, you can get carded versions of Shang Tsung for around $30.  Lots of Mortal Kombat Movie figures found their way to dealer stock in the 1990's, though.  And, while most of it has since been resold into the collecting world, you can still find lots (from time to time) that have several MOC Mortal Kombat Movie figures that sell for substantially less per figure.  If you can be patient and are willing to spend time looking, you can still get cheap Shang Tsungs.  But, the Mortal Kombat Movie figures have gotten substantially less common in the past couple of years.  So, those deals are getting harder and harder to find.  Personally, I don't find the figure worth those prices as I view Shang Tsung as a curiosity more than a vital part of my collection.  It's nice to have him available and he gives photos of later ninjas some depth since he's so recognizable.  But, that's about the end of his value. 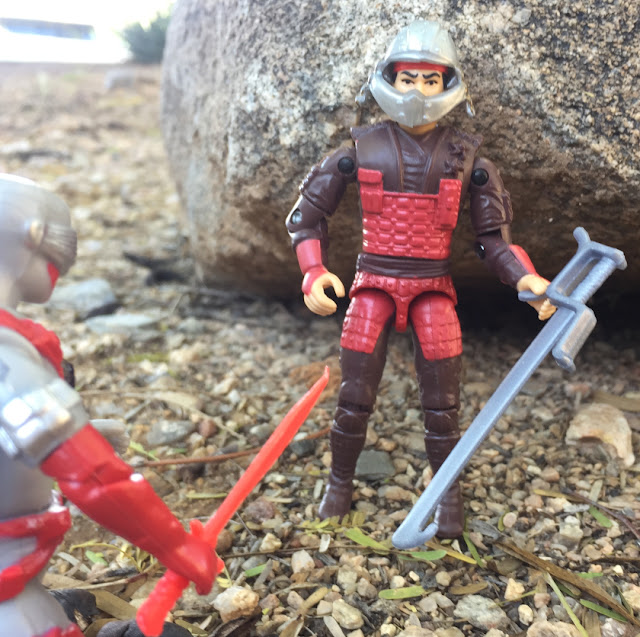 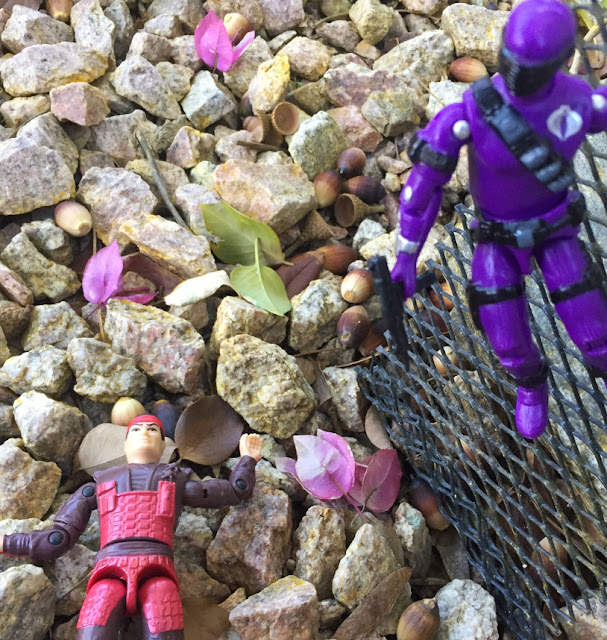 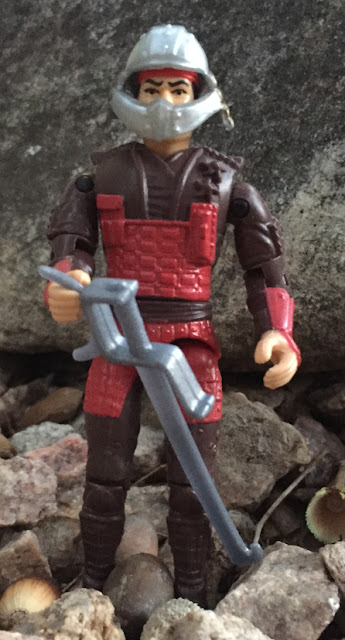 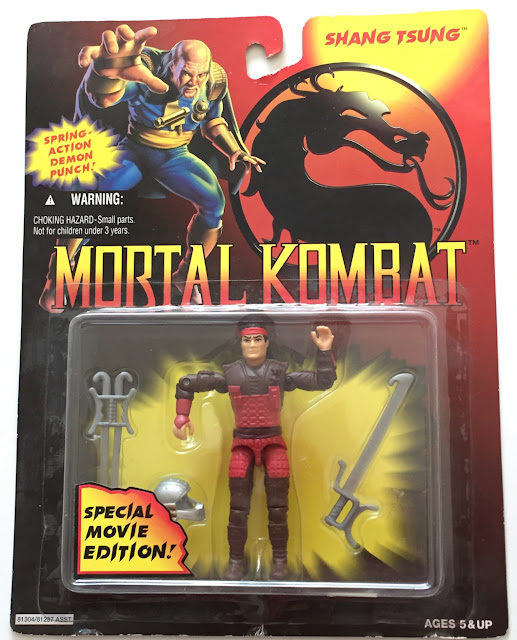