The Ninja Commandos are one of the more famous groups of unproduced Joes.  Historically, the rank just behind the Manimals in terms of notoriety.  This is mostly due to the fact that they were very close to production.  And, like the Manimals, exist in full production versions: just very few of them.  The set was designed as a 5 figure group featuring Road Pig, Knockout, Stormshadow, Flint and Budo.  Of the group, Budo made a lot of sense.  He had a martial arts background (though as a Samurai) and was in need of an update.  Of the figures in the set, Budo is also the most famous, but for different reasons.

If you look at the figure below, he may look familiar.  The reason is that the entire figure figures was used to make the Mortal Combat Movie Edition Shang Tsung.  Unlike Flint and Road Pig (whose parts were used elsewhere, but not as entire figures) Budo's full mold was resused.  Shang Tsung is nothing more than a Budo repaint.  And, as a result, has become a rather sought after among G.I. Joe Collectors.

For those familiar with Shang Tsung's appearance, though, the Budo figure is a bit of a contrast.  The figure actually bears some resemblance to the 1993 Mail away Budo figure.  The teal, black and red isn't as good of a color combo as the maroon and brown of the Shang Tsung figure.  Neither figure fully paints the details on the mold. The black body of this unreleased Joe, though, obscures much of the work that went into sculpting the pieces.

In the case of this figure, since a full (and, in my opinion, better) repaint was released at retail, I don't think collectors really missed out by his cancellation.  As I was scouring the last remnants of the Joe line at retail in 1995, I surely would have come across this figure had Hasbro released him.  And, I'm equally sure that I would have left him rotting on the pegs due to the odd construction, boring gear and less than inspiring colors.  But, seeing him as he never got to appear is interesting and gives collectors a glimpse in some of the other Joe ideas that never got to see fruition. 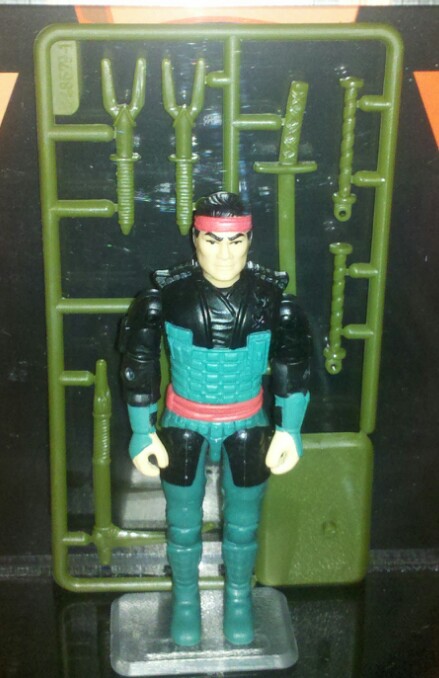 Posted by Robot_Sonic at 3:07 AM
Email ThisBlogThis!Share to TwitterShare to FacebookShare to Pinterest
Labels: 1995, Budo, Ninja Commandos, Rarities, Shang Tsung