Generally, there is a divide in collector opinions about the vintage Joe line.  There persists the belief that the '80's Joes were realistic military while the '90's Joes are brightly colored sci fi.  The truth is that the '80's Joes feature large amounts of science fiction as well as bright colors.  While, the 1990's releases have a large number of figures that are true to Joe's military roots.  However, the 1990 and 1991 series of figures are, to my eye, identical to the Joes released in the '80's.  Hasbro was not yet cutting corners to save a few pennies on each figure.  And, the spring loaded gimmicks were just rearing their head as figure accessories.  The early spring loaded weapons, though, were ingeniously designed toys that disguised the action features as part of the figure's general accessory complement.  This is showcased no where better than with the 1991 Heavy Duty figure.

At first glance, Heavy Duty follows the design of many '80's Joes.  He uses military colors and has a uniform that appears to be militaristic.  Of course, for characterization, Heavy Duty has the added flair of torn sleeves and a backwards cap.  It's just enough to keep Heavy Duty as an incredibly useful figure to have around.  He's fun and not too caught up in regulations while still retaining an air of realism.  But, beyond that, the overall sculpting of the figure is well done, too.  Heavy Duty features many small details (from grenades to a wrinkled shirt to his tattoos and the magnificent "JOE" on the front of his hat) that show the care the designers took when creating this figure.

The main calling card of Heavy Duty, though, is his gear.  1991 was all about the accessories as most figures included large amounts of weapons, packs, hoses, sleds and other accouterments that gave the figures some panache.  Heavy Duty is no different.  While he lacks a traditional pistol or rifle, Heavy Duty is outfitted with a massive cannon that affixed to his backpack and is worn around his waist.  The main structure is made of many parts including a cannon, ammo canisters and harness with handles to operate the guns and two removable spring loaded missile launchers.  (The launchers from this era were more discreet than those that came later and better blend into the overall design of the figure's other gear than the stand alone pieces that would dominate 1993 and 1994.)   All of this connects to Heavy Duty's backpack on a large swivel post.  The top of his pack features a plug in for a red, semi-translucent sight.  It's all one interconnected contraption that is unwieldy, odd, unrealistic and also very, very fun and cool.

Heavy Duty's filename is Lamont Morris.  Lamont Morris is the name of a Hasbro employee and Heavy Duty was sculpted in his likeness.  In the mid 2000's, Hasbro also designed an Endor Rebel Trooper in Lamont's likeness.  This makes him a very rare visage that has appeared in both the G.I. Joe and Star Wars lines.  You can see the 15 years of age difference (as well as improvements in action figure head design) when comparing the releases. Hasbro liked to honor their employees with appearances in their toy lines.  And, Heavy Duty is one of many vintage Joes who is named after a real Hasbro employee.

For me, Heavy Duty is a perfect background figure.  I had his weapon rig for years.  But, I never used it.  Instead, Heavy Duty was equipped with M-203's, M-60's and even bazookas and rocket launchers.  His look gave him the diversity necessary for such varied roles.  The gun emplacement is fun to use in certain situations.  But, it's impractical at best and hides many of Heavy Duty's best features.  As such, I rarely use it with the figure.  Heavy Duty, though, gets used a lot.  I found him in the background of many figures' pictures going back to 2001.  He's generic enough to complement many other Joes and not look out of place in photos.  His rough and tumble appearance allows for use in vehicles, infantry divisions or even as an artilleryman.  Heavy Duty carries on the tradition of Alpine, Dial Tone, Repeater and Recoil as a second tier character that has a ton of play value without being a major character.

The Heavy Duty mold didn't get a ton of use.  After this original release, it disappeared until 1998.  Then, Hasbro repainted the mold in muted earth tones and released Heavy Duty as a member of the MOBAT crew with Thunderwing.  The exact same figure/vehicle combo was re-released in ARAHC packaging in 2000.  The character of Heavy Duty became a staple of the JvC line starting in 2002.  But, the character did not see another release in vintage Joe form.  All of the mold except for the head was redone for the Operation Flaming Moth Chuckles figure in the mid 2000's.  It's a harsh repaint that doesn't work for Chuckles at all.  But, the drastic color differences help to hide the fact that the body is from the original Heavy Duty.  Due to the character's ubiquity in the JvC line, collectors didn't really clamor for more Heavy Duty repaints in the vintage homage lines.  But, there is still unused potential with the design and at least one more repaint would have been welcomed.

Finding mint and complete Heavy Duty figures can be problematic.  The figure itself and all of the gear except for one piece is actually fairly common.  But, the red sight that attaches to the gun station is the part that creates issues.  Often, this piece is just missing.  However, even when it is there, the small peg that actually attaches the sight to the pack is almost always broken.  If you find a dozen complete Heavy Duty figures, the attachment peg will probably be broken on at least 10 of them.  For savvy dealers, this is an exploitation point and you'll see them offer and sell a few figures in the $30+ range.  At open market, though, unbroken figures are $16-$18 purchases.  It might take a few weeks to find one.  But, collector disinterest in the figure and general malaise towards the character keep prices lower than such an oft broken part would otherwise suggest. 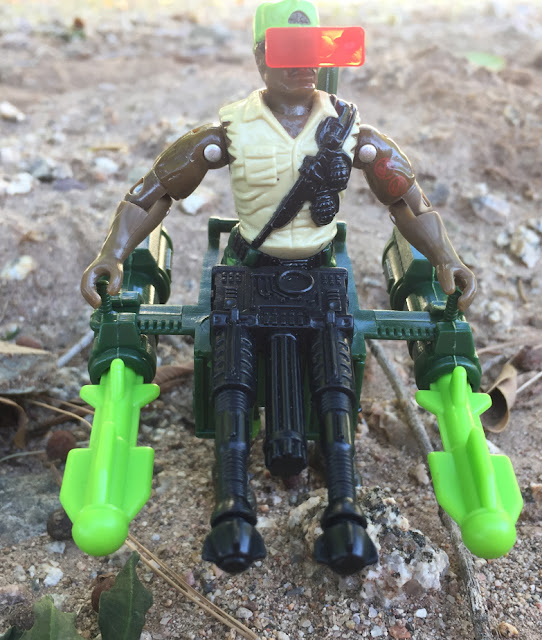 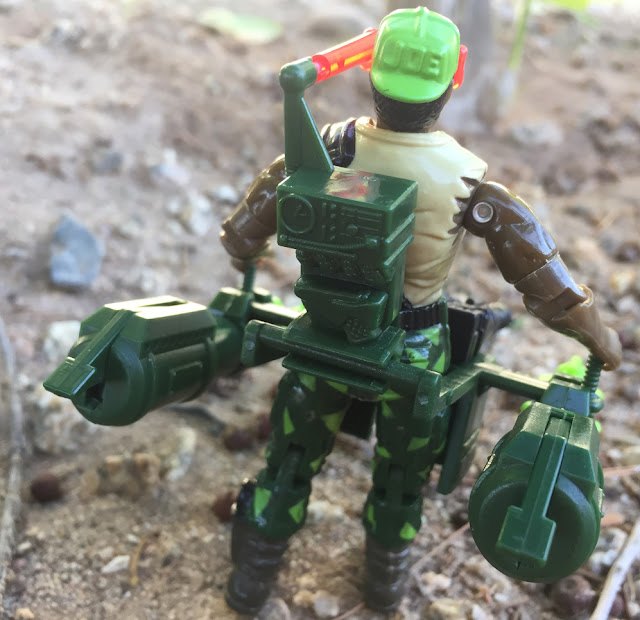 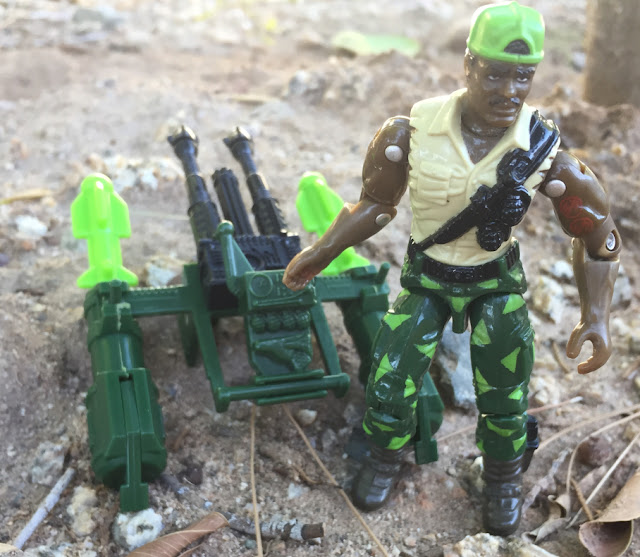 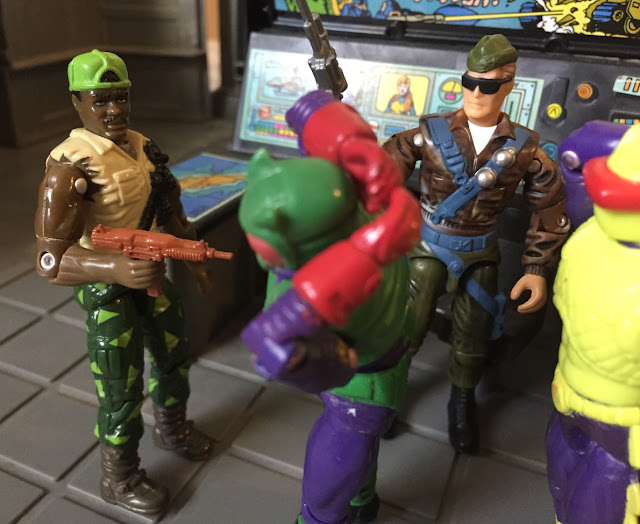 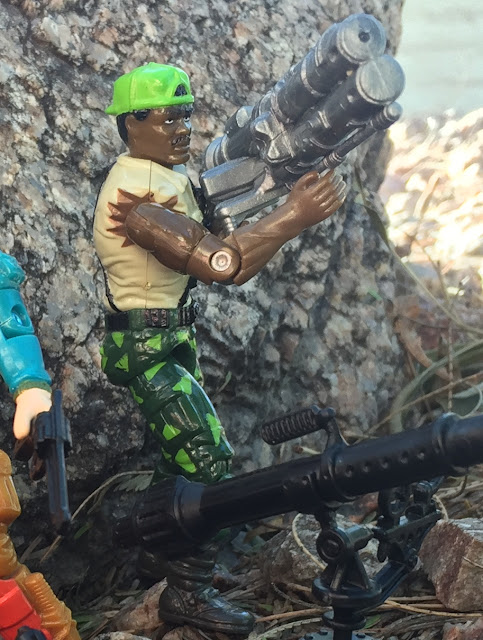 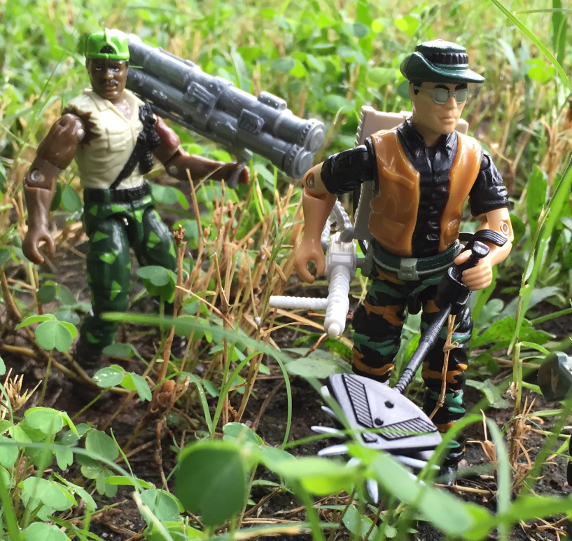 Posted by Robot_Sonic at 1:53 AM
Email ThisBlogThis!Share to TwitterShare to FacebookShare to Pinterest
Labels: 1991, Heavy Duty