The 1993 Ninja Force Snake Eyes figure is one of those releases that has so much potential masked by the sculpt's limitations that it is frustrating to own one.  You see the figure lying there, look at the head, and think about how great that it looks.  Then, you get this splash of aqua blue color that's tough to reconcile.  But, if you can get past all that, you are stuck with non-standard Ninja Force articulation that spoils any hope this Snake Eyes ever had of being a valued part of a G.I. Joe collection.  Were this figure released with grey highlights instead of blue and done up in classic Joe style, you'd have one of the more sought after figures from 1993.  But, he wasn't and the result is a figure that's kind of fun but also severely limited.

The more I look at the Ninja Force Snake Eyes, though, the more I convince myself that there is a gem hidden somewhere in this figure's design.  The easiest place to start is the head.  Really, the head is perfect.  It's a blank, more mysterious look for Snake Eyes and is different enough from his other vintage appearances to stand apart.  I like this better than I do the visor or goggles.  There are some nice Snake Eyes customs out there that use the Ninja Force head.  (And, a really cool Ninja Force Snake Eyes that used a Black Panther head from a Marvel figure.)  The look and actual release of the head as is has value since it's just the standard black with the powerful white eyes.  The head gives Snake Eyes a sense of aloof danger that was always alluded to with the character.  The comic book renderings of Snake Eyes from this time show that the design could have worked had the figure been approached differently.

The rest of the body, though, is dripping with potential.  The body is covered in straps and pockets.  They, though, hearken back to Snake Eyes' commando roots.  He has grenades and a pistol as part of the sculpted accouterments.  With better coloring and standard articulation, this figure has the potential to excellently bridge the gap between the warring factions of Snake Eyes' specialties.  That's a tough line to thread and the fact that a figure in a ninja specific subset is still able to bring a sense of Snake Eyes' original duties to the table is quite an accomplishment.  Again, the comic used a design loosely based on this Snake Eyes appearance in both capacities.  The ninja aspect was more played up, as it made for more sensational story telling.  But, Snake Eyes' military training was still evident and this figure design married to the two for consistency.

To accommodate the Ninja Force action features, the Snake Eyes torso is big and bulky.  This is most prominent on the figure's shoulders.  They are set high above the arms and make it appear that Snake Eyes is either very deformed or wearing some type of armor.  This little design flaw has a visual impact on the figure and further limits his value. The odd legs create a blocky lower body that looks more like a vintage Star Wars figure than something 15 years more advanced.  All of this was to accommodate the inner workings of the spring loaded action features.  Sure, this Snake Eyes can chop his arm down: but he looks terrible.  However, by 1993, action features like these were a bigger selling point than 10 years of consistent figure design.

Snake Eyes includes a bunch of blue ninja weapons that match the highlights on the figure.  Affixed to standard weapon tree, these blades are cool and fit well with the figure's aesthetic.  All of the 1993 swords are large, bulky and useful for dueling between figures.  One of my laments of the 1980's edged weapons was that they were small for the figures and difficult to play with.  The Ninja Force sculpts solve this issue with a total lack of subtlety.  If you needed spare swords to play with, this Snake Eyes solved the issue by including 3 of them, a knife, two claws and nunchuks.  With Snake Eyes removed from his package, every 1993 era kid had all the swords he needed to stage a nice battle.

This Snake Eyes body was used in 1993 and the re-released as part of the Shadow Ninjas subset in 1994.  The mold then died and was never seen again.  The 1993 figure, though, was released in a few different international packaging variants: though the figure is the same.  Snake Eyes didn't appear in the Street Fighter or Mortal Kombat Movie lines: where many Ninja Force molds went to squeeze a few more pennies out of the parts.  A really enterprising Hasbro in the 2000's might have found use for the figure's head.  But, that would have taken a bit too much effort.  The 1993 head on the 1989 body might have made for a fun update to a mold that got quickly tired by 2002.  But, leaving just this figure and the color changing 1994 version is more than enough for any collector.

Ninja Force Snake Eyes are cheap.  Way too many carded figures sell in the $40 range when sold by dealers.  But, the market price seems to be about $20 for a MOC version of this figure.  Loose, mint and complete samples run about $10.  Just a couple of years ago, you could get a carded version for that price.  And, you don't see the Ninja Force figures with the regularity that you did half a decade ago, either.  All of which is to say that, if you want one, they're still pretty affordable, but they're also drying up.  Personally, I find this figure a lot of fun and a great look for Snake Eyes...even if the construction and colors leave something to be desired. 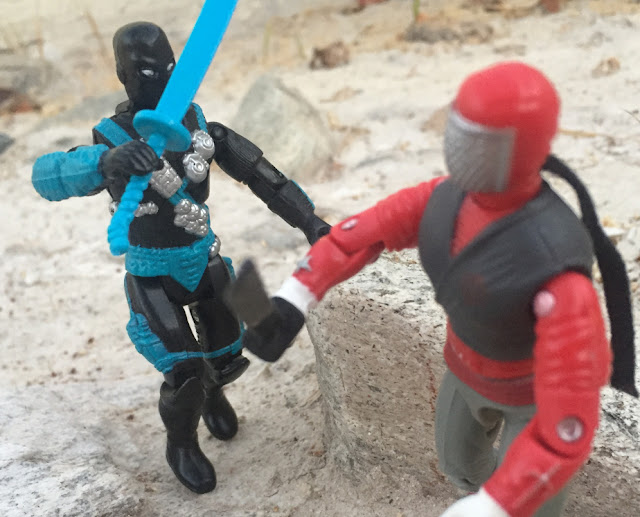 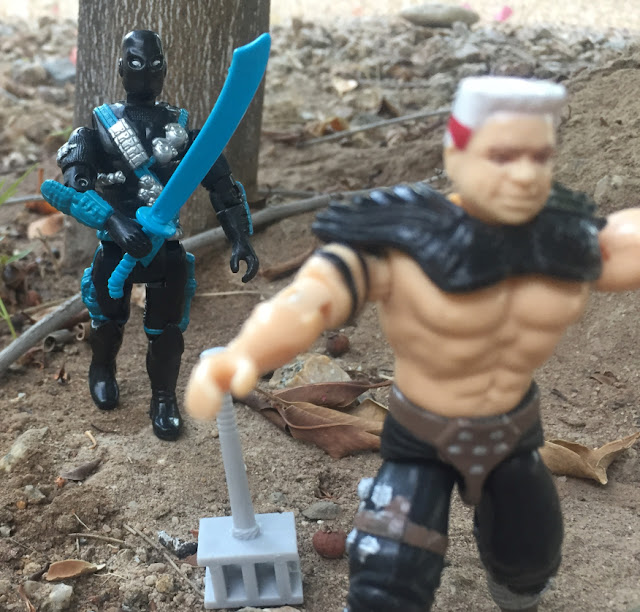 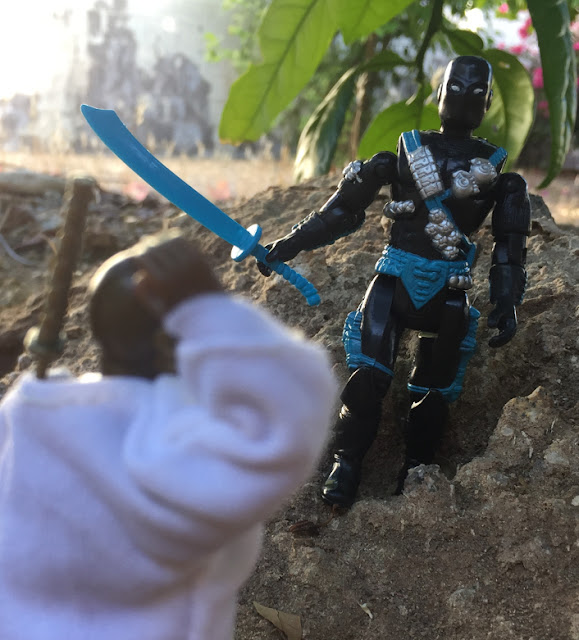 Posted by Robot_Sonic at 1:03 AM
Email ThisBlogThis!Share to TwitterShare to FacebookShare to Pinterest
Labels: 1993, Ninja Force, Snake Eyes