Tracked Assault Vehicle by Past Nastification

If you’re still shaking your head about the extra stupid Tread Ripper in 2013’s GI Joe Retaliation, this vehicle will either make your head shake more furiously, or stop shaking it all together.

If it frustrates you that Midwood Brands LLC can make something similar to -but better than- Hasbro’s Tread Ripper, then shake that head a little faster.  But if it makes you happy to see a basically unheard of company outperform Hasbro, then stop shaking that head, because the Tracked Assault Vehicle (TAV) is a good cheap toy.

Does Midwood Brands LLC design the products it sells, or just import them from China?  I have no idea, but I’ll be generous and approach this review as if they design the toys.

Midwood Brands LLC is a toy supplier for Family Dollar, and is the maker of the “Imitation Vamp” and “Heroes Playset Fortress” from the last few years.  Technically, there isn’t even a name for the TAV, as it’s simply included in a “Military Vehicle Set 2pk”.  The other vehicle, if you’re curious, is a narrow-framed dune buggy (also technically unnamed).  I’ve referred to Family Dollar’s 1:18 vehicles as “GI Joe knock-offs” before in my reviews a joeaday.com.  But now that Hasbro doesn’t even have GI Joe product on store shelves, it’s more like Midwood Brands LLC is a juvenile trying to hold down the fort while Hasbro is out binge drinking.  That’s bad parenting, Hasbro.

The TAV takes the Tread Ripper’s concept of having a driver cradled between two treads, but does it right.  The Tread Ripper has a more-or-less exposed driver’s seat in a strange position with a roll cage.   The TAV has the driver’s seat more centrally located and protected by a closing armored canopy (there isn’t any clear plastic to represent ballistic glass, but I’m willing to see it as an “imagination choice”).  Whereas the Tread Ripper driver could have a grenade easily lobbed at his/her feet, the driver of the TAV is as snug as a bug in a rug.

The overall bodylines are angular and triangular, with crisp detail.  There’s even a slight texture on the body, which is intentionally missing from some of the panels.  It’s a great attention to detail.  The TAV looks like something that a SWAT team would use to get into a fortified position inside of a city or other close-quarters environments.  Its design is compact but durable.  The front of the vehicle features an angled breaching blade, like an upside-down cattle plow from a train.  There is a very well detailed rotating/elevating machine gun mounted behind the canopy.  The strangest design element is an oversized paddle wheel along the centerline of the rear of the vehicle.  What would it do that two treads already couldn’t?  I have no idea, but I’m not opposed to its inclusion in the design- it rolls on the ground with the “hidden” wheels under the treads.  The TAV looks like a larger version of the real world Badger, which itself appears to have drawn on the look of the ’83 HISS tank.  Art imitates life imitates art?

Given the discount toy nature of the TAV, the plastic of the body is beefier than you might expect it to be.  The “technical details” on the paper stickers are nonsensical and there’s not much detail inside of the canopy.  The treads, of course, don’t actually move, but have the above-mentioned rolling wheels on the bottom.  This vehicle could very easily have been a one-piece shell, like Hasbro’s Cobra RAT, but it’s made of multiple pieces interlocked and screwed together.  Much better construction than I would have expected.  Full shame-filled disclosure:  I like the RAT.

The tan and black color scheme is a good starting point.  I could see customizers decking it out in Cobra blue/black or Joe olive drab, and maybe adding some “glass” to the canopy.

The TAV is probably a $3.00 vehicle, as the entire set sells for $8.00 (which includes the TAV, the narrow-framed dune buggy, a throw-it-in-the-trash action figure, and several oversized weapons).  At its price point, the TAV easily outshines Hasbro’s Tread Ripper.

The Tread Ripper looks like something a seven year old designed and a Hasbro executive somehow approved.  I’m aware that given the Tread Ripper’s movie origin, it may have been thought up in Hollywood instead of Rhode Island, but it’s still a ridiculous design.  The TAV, even with its paddle wheel, looks like a toy version of a plausible specialized real world vehicle.  Unlike the Tread Ripper, it’s also fun. 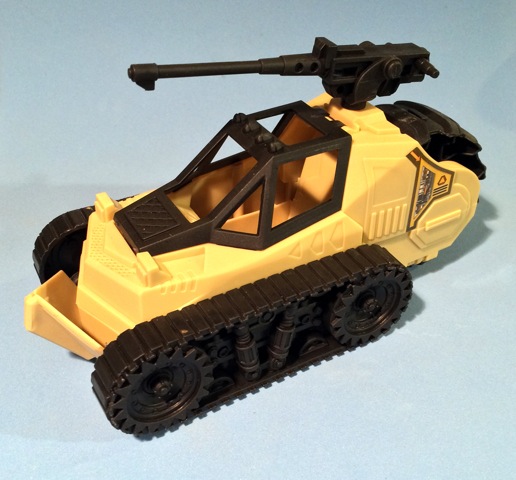 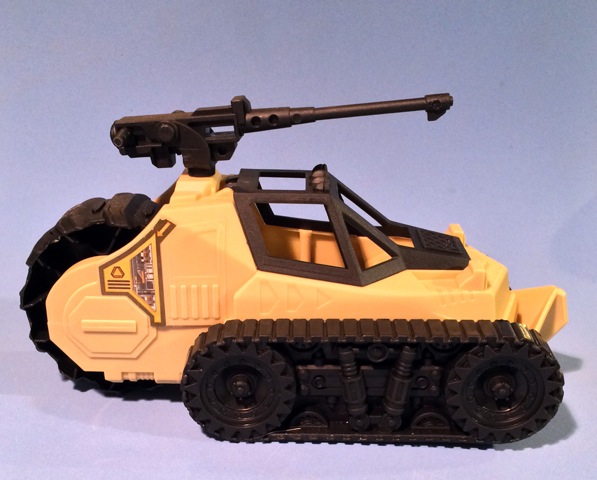 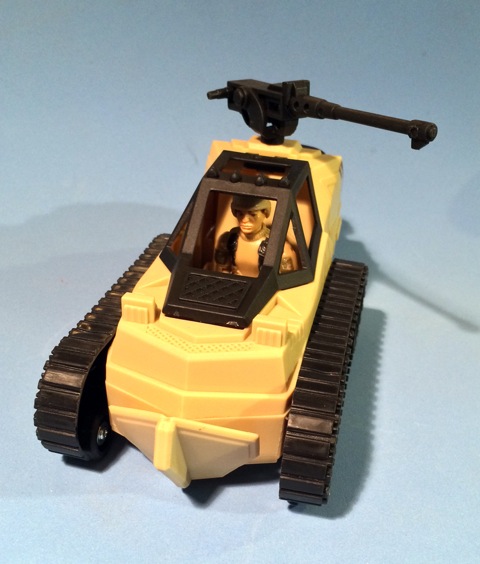 Posted by Robot_Sonic at 1:06 AM
Email ThisBlogThis!Share to TwitterShare to FacebookShare to Pinterest
Labels: Not_Joe, Past Nastification, Tracked Assault Vehicle, Vehicles