In the early 2000's, collectors wanted army builders.  Hasbro, to an extent, understood this.  While the JvC line had offered a nice run of army building figure, the vintage repaints that were interspersed in the waves left collectors wanting.  Sure, we'd seen Vipers and Alley Vipers.  But, the colors weren't great, they lacked decent gear and they were packaged with Joe figures that raised the price.  (Though it also made the army builders much easier to find.)  In early 2003, Hasbro finally seemed to get it and they took chance on the first real online exclusive in the Joe line's history: the BAT Pack.  For $15, collectors got 5 army building figures and one character.  You can be sure that single character caused more consternation than the 3 black BATs caused joy.  Such was the way of the collecting world at the time.  But, the Overkill figure was a welcome repaint that showcased a mold that was, in 2003, foreign to most collectors.

The BAT pack was a failure.  And, this Overkill is a big part of the reason why.  Had he been colored in more traditional BAT colors, it's very likely that collectors would have warmed to him.  But, in the early 2000's, collectors didn't tend to like molds from the 1990's.  And, they certainly didn't want to see anything that dared to take a chance in terms of color.  Overkill's third strike is that he was a character included in an army building set.  In short, there was simply no way collectors would like him.  And, most didn't even give the figure a chance.  But, did he deserve this fate?

In 2020, it's easy to look back at an obscure mold colored in bright blues with a red head a neon green torso as a fun bit of kitsche.  In 2003, when collectors were "super duper serious!!!!", this was an abomination that was written off as Hasbro not getting us.  But, both things can be true.  Hasbro was still trying some fun and offbeat ways to be creative.  And, collectors punished them for it.  At the same time, Hasbro simply didn't listen to collectors at all.  Had they done so, this Overkill might have been less ostentatiously colored and would have better fit with the BATs.  Had the Inferno BATs been the only oddball offering in the BAT pack, it might have fared a little better.  But, that's all ancient history at this point.  And, this Overkill stands as one of the few brightly colored figures from the 2000's.

Overkill included his original complement of accessories.  The only missing piece is the huge talking backpack that was the gimmick for the original release.  The pack is a giant burden that limits the figure.  So, it's absence isn't an issue.  (Though, the pack did have a place for Overkill to store his extra hand attachment.)  Overkill has a blue hand, a black rifle of some sort and a black claw attachment.  The black color is nice and is actually a better fit for the 1992 figure.  But, the design of the weapons is just as bizarre as the design of the figure.  So, it fits.  But, it's also somewhat out of place in the entire Joe line.

Overkill does have a hidden feature.  Inside his chest are a set of .50 caliber machine guns.  (According to his filecard.)  Prior to 2003, the presence of these guns was known to a small percentage of Joe fans.  Overkill was just so obscure and his 1992 release so far outside the "acceptable" window of collecting that most collectors had no exposure to him.  This 2003 version was good in that it showcased the design of this figure to a new generation of collectors.  For a time, vintage Overkill figures were somewhat sought after.  But, that quickly died out as the ire directed at the 2003 release boiled over and the character fell into ill-repute as Hasbro began to recycle him into the JvC line while other fan favorites were ignored.

I've told the story of the BAT packs before.  Hasbro wanted to sell 10,000 of them.  And, that was the likely production number.  But, online dealers simply weren't large enough to handle that many.  And, those who went all in were left with unsold BAT packs for years.  Hasbro liquidated their overstock to Amazon (who was the distribution arm for ToysRUs.com at the time).  And, eventually, to liquidation brick and mortar stores.  (Tuesday Morning stores carried leftover BAT packs for like $6 for a while.)  Being the only single figure in the pack, though, means that Overkill is actually quite scarce.  If there are only 10,000 of him (any other figure would be lower) then only convention figures and the infamous 2002 Wave V have lower production runs.  But, since nobody cares about this figure, his availability isn't an issue: even 17 years later.

These days, mint and complete Overkills will run you between $5 and $10 depending upon how long you want to wait to get one.  The figure was the least desired of the pack and army builders of the era (who often had 10 or more total sets) usually sold or traded away extra Overkills just to clear out space.  Overstock figures were available from Asia for a long time, often in large lots.  And, they hung around forever since no one wanted them.  For the price then and, even, the price now, though, this is a fun figure.  Overkill isn't overly represented in the collecting community and he's rarely seen in photos or displays.  This version is not really any better or worse than the original release.  So, it's a nice supplement to the Talking Battle Commanders figure. 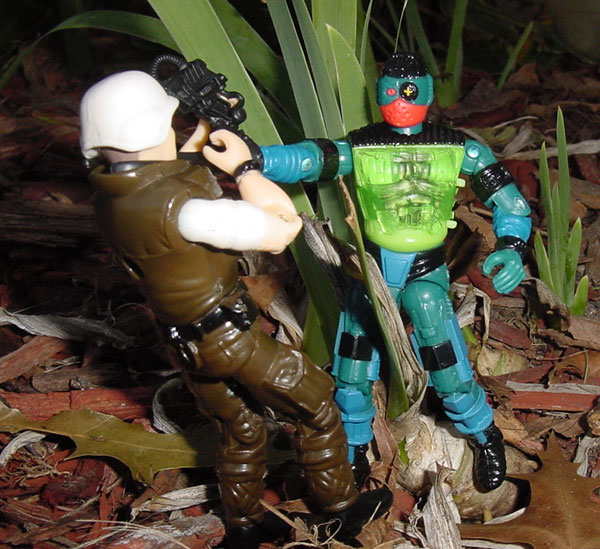 Posted by Robot_Sonic at 1:02 AM
Email ThisBlogThis!Share to TwitterShare to FacebookShare to Pinterest
Labels: 2003, BAT, Battle Android Trooper, Mail Away, Overkill