My dad was a Sears junkie.  He would go to the store and browse the various aisles like I peruse toy web sites today.  He had no real intentions of buying most of the items he saw.  But, I'm sure part of him thought that if he won the lottery, he'd buy up every tool, yard gadget and electronic device in the store and those items would somehow provide him with a modicum of satisfaction...even if he never used them.  The upside to this was that when the family was at the mall, my dad would take my brothers and I to Sears while my mother would shop in the other department stores.  In our local store, the toys were located right next to the tools.  So, he could wander those aisles while we would drool over the toys.  My main memories of spending my time at Sears are not only looking at off Joe brand toys like Rambo, Sectaurs and even the Temple of Doom toy line but also seeing the Sears G.I. Joe exclusives and holding the boxes, memorizing the details of toys I didn't really have hope that I would own.

All that longing, though, paid off.  In 1985, I found the Sears SMS under the Christmas Tree.  It quickly became one of the staples of my Joe adventures and survives, to this day, in relatively good shape.  In 1986, my younger brother opened the Dreadnok Air Assault.  I had seen this at the store, but wasn't overly fond of it.  (I had hated the FANG as a kid.)  Within a few presents, though, I discovered the Dreadnok Ground Assault as one of my flagship gifts.  This was something I had wanted since my 1986 era Cobras were wanting for additional ground vehicles.  It was quickly opened up and joined my collection as one of the few new pieces that arrived in the 1986 holiday season.

The Dreadnok RAM, though, didn't find use in the Cobra arsenal.  By late 1986 and early 1987, my original RAM was long relegated to a super glued mess that no longer worked at all.  The Silver Mirage sat in a junk pile due to the low quality and general frustrations I had when playing with it.  So, a mostly green RAM seemed like a better fit for the Joes than the Dreadnoks: characters I didn't really use any longer.  At the time, I had a slew of custom characters that I had cobbled together from parts of broken 1984, 1985 and 1986 figures.  One of these was a combo of Flint's head, Footloose's torso and Snake Eyes' legs.  (I forget the arms.  I think they actually changed a few times as I snapped thumbs.)  This character, named Thunderbolt (how original...) was the principle warrior in my collection.  He wore Flint's backpack but carried the Ripcord rifle from the Tactical Battle Platform.  His primary specialty was fast attack and his signature move was riding a motorcycle with reckless abandon into a battle.  His cycle of choice?  The Dreadnok RAM.

Perched atop the RAM, Thunderbolt would ride into the fray to save the day for the Joes time and time again.  He would both use the gatling gun sidecar and exclude it, firing his weapon with one hand while he drove the cycle with the other.  This personal transport became as much a part of the character as the figure, his rifle and the ammo he found at the bottom of the "waterfall" that was my grandfather's concrete front steps on his Buffalo, NY home.  In very short order, the Dreadnok RAM became his and his alone.  I kept pretty good care of my toys in 1986 and 1987.  But, this RAM had some pieces break due to heavy usage.  It shows how important the cycle was to one of the most integral toys in my collection.  When it came time to pack my toys away in early 1988, the Dreadnok RAM was packed with the Thunderbolt figure and kept safe while the Stinger was tossed in a box and left to the exposure in the attic of my parents' home.

Today, though, Thunderbolt is long gone...dispatched to simple memories.  The Dreadnok RAM has, instead, found itself the primary ride of the Brazilian Relampago figure.  The greens of the RAM and Stinger mesh nicely with the vintage Python Patrol figures.  Python Troopers and Officers are the right match of mold year for the Stinger and man it very well.  Relampago is a motorcycle rider.  So, his assignment to the RAM is a natural fit.  And, having a relatively rare figure ride a relatively rare motorcycle seems like an additional bonus.  But, due to the fragility and rarity of both the cycle and the jeep, I rarely use these items any longer.  It's just too dangerous to take them outside and risk breaking a three figure part on the toys just to get a photo that will get a few likes and then disappear forever.  So, this RAM and the Stinger remain boxed up and rarely venture out into the wild.  I hope to someday change that and get a nice set of photos fully showcasing the Python Patrol's symmetry with this set.

One of the calling cards of the Dreadnok exclusives was that they changed color.  For a kid in 1986, this seemed really cool and fun.  Once you owned the vehicles, though, you realized that the reality of the color changing ability was limited.  If you didn't take the toys outside, you wouldn't know they changed color.  And, if you did take them out, they would change into the other color and stay there for quite a bit of time before slowly fading back.  In short, it was a dumb gimmick, but it sold toys.  What it also did, though, was leave a legacy of super brittle and easily discolored plastic.  Dreadnok vehicles that are stored relatively well will still have broken parts due to the fragility of the aging plastic.  The color changing parts will turn dark if you're lucky.  But, more commonly, they take on a yellowish brown hue that renders the vehicles useless.  Supposedly, there is a variant on the RAM where parts can be in different colors.  I still believe that much of this is a function of plastic deterioration.  But, the variants are officially listed, legit and are something for the truly sadistic collector to track down.

Every Joe collector who grew up in the '80's has a favorite retailer story.  There is an entire subset of collectors who track down vintage cardbacks with specific price tags that denote the retailer of origin.  I recall peg after peg of figures at department stores, specialty retailers, hardware stores, mom-and-pop shops, niche providers and the multitude of chain and independent toy stores that used to dot American malls.  If you had asked people back then to forecast the retail environment 30+ years out, it's doubtful that anyone would come close to the apocalyptic space that is 2020's retail stores.  All of the small, regional, local and even national stores have long since been consolidated, merged or forced out of business due to changing consumer habits.  Old price tags and retailer exclusives like this RAM are memories of different times.  While I doubt we'll ever see a toy renaissance like the 1980's again, the reality is that today's retail simply couldn't support it.  In the '80's, there were dozens, if not hundreds of outlets in which your ideas could be sold.  Today, if Wal Mart and Amazon pass on your product, you're left with either a really cheap product that can be sold at discount stores or a really expensive niche product that's marketed to a small, affluent group.  Neither of these will ever lead to the mass adoption of a toy line and we'll never again see the culture of a youthful generation defined by hugely popular toys.

As I think back about those trips to Sears with my father, I wonder what memories my kids are forging now that they are entering the same age brackets as I was when Star Wars and G.I. Joe dominated my experience.  I also now better understand why my dad would not mind sitting in Sears for an hour or two, the kids safe, nearby on a Saturday afternoon.  There are days I'm happy to buy the week's groceries, just to get out of the house for an hour's peace.  I'm saddened that there are no longer toy stores where I can take my boys to look and browse for new playthings.  But, that experience was a big part of my childhood.  They will have a chance to experience something different.  And, I'm sure that there's some activity we do today that I consider innocuous that will burn deep memories in them and be their happy nostalgia at some point in the future.  I only hope that they're able to share those thoughts with me so we can relive them together.

I was prepared to talk about how expensive Dreadnok RAMs are.  However, I was not prepared for exactly HOW expensive they are.  Mint and complete motorcycles will sell for over $200 with most reaching $250.  Just the cycle with a broken kickstand will run you well over $100.  Simply put, that's insane for something like this.  Sure, the toy is relatively rare and time hasn't tended to be kind to the brittle and discoloring plastic.  But, the toy is also limited and not something that is essential for a collection.  But, the Dreadnoks are popular.  The RAM is popular.  And, collectors are gladly overpaying for harder to find vintage toys these days.  Personally, I'd never pay anywhere near that for this cycle.  But, I have the luxury of having both one from childhood and one from a pre-insanity priced adult collector purchase.  So, that certainly colors my view of the current pricing.  Having the toy as a kid certainly has left this item as a vehicle that I'm glad to have...just for the nostalgia.  Without that, it's value would be limited to me. 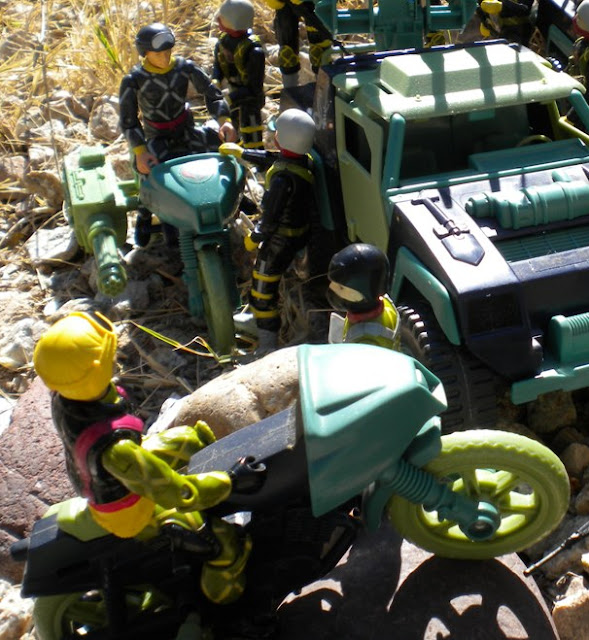 Posted by Robot_Sonic at 1:58 AM
Email ThisBlogThis!Share to TwitterShare to FacebookShare to Pinterest
Labels: 1986, Dreadnok, RAM, Retailer Exclusive, Sears, Vehicles