In the past four years, I've looked at a lot of G.I. Joe figures.  If you asked me which years received the most of my focus, I'd have easily put 1994 as one of the most popular years.  Only, this isn't the case.  Since September of 2015, I've only profiled 5 1994 releases.  While I have taken hundreds of photos and done a ton of Around The Web features on 1994 figures, I have taken an in depth dive on just five.  (In the same time frame, I've reviewed 18 1993 releases.  So, that's the primary year of late run vintage Joes for me.)  This is far fewer than I would have thought.

I didn't really hunt G.I. Joe figures at retail in 1994.  It wasn't until 1995 that I really started scouring stores: seeking out the ghosts of a now cancelled line.  And, while it was easy to find some figures at stores, it was pretty much impossible to find many specific characters.  Cobra army builders, lower production run repaints and the second series of the 1994 figures were all difficult to find.  Few stores were still getting shipments of G.I. Joe figures.  (Though, there was warehouse overstock that flowed through into 1996.)  If a case was put out, it was usually just one case and the same figures sold out first each and every time.  Major Bludd was among the figures that I never found.  He was a classic character in a decent design.  So, he sold out while other Joes and even a few Cobras were left behind.

The general consensus in collecting circles is that the traditional color for Cobra is blue.  The classic blue color is supplemented by crimson and the entire Cobra organization is based on blue and red.  However, that really isn't the case.  In reality, the main Cobra color is actually purple.  If you look at the carded figures released between 1982 and 1994, I find 10 primarily blue Cobra figures and 16 primarily purple Cobra figures.  Now, to be fair, purple become more prominent after 1986 with a big surge in the 1990's.  And, blue is the basic color of the Cobra Trooper, Cobra Officer and Viper: figures who comprise the backbone of many Cobra armies.  But, the truth is that purple is a more prevalent color among Cobra releases than blue.  And, it should get more credit as the main color of Joe's primary antagonist.

My first real interaction with this figure was not with the figure itself.  In 1999, I managed to acquire a prototype of an unreleased 1995 Battle Corps Rangers figure.  The seller offered up a resin copy of this Major Bludd figure for a paltry additional amount.  So, I took him up on on it.  This unpainted torso, arms and head (it didn't include the legs since they were reused from the 1991 Toxo Viper) introduced me to the hidden blade in Major Bludd's arm.  It also, though, forged an odd visual treat that I wish were actually true.  On the unpainted figure, the raised bumps of Bludd's eyepatch looked like a crude skull.  While that may be a bit too "pirate-y" in 2019, it worked as a cool Easter egg on the figure in 1999.  When I finally acquired a production figure, though, the optical illusion from the resin colored test was exposed.  The dots on the eyepatch are just additional details and don't, actually, lay out like a skull.  But, for a few months, I thought this figure was much cooler than he actually turned out to be.

Bludd's character has always been among the most fascinating for me.  His Australian origin seemed exotic in 1983.  Unfortunately, Australian stereotypes infiltrated with his 1994 filecard and make his birthplace more of a joke than it was originally meant to be.  But, looking back at Major Bludd's original card art from 1983, you see the roots of a truly dangerous man who would have made for an excellent villain.  He wears tons of dogtags (that I believed he took from defeated enemies), had been in prison and wore the requisite bad guy eyepatch.  So, he had all the trappings of a classic villain.

One of the line's on Bludd's filecard that stands out is that he's wanted for war crimes in Rhodesia.  This is a holdover from Bludd's original 1983 filecard.  I find this fun, though, because Rhodesia ceased to exist in 1979 when the Rhodesian Bush Wars finally ended.  It's very possible that, in 1983, Bludd would still be a fugitive from the war that had ended less than half a decade earlier.  But, by 1994, it seemed very dated.  This was a likely relic of the fact that by the time I learned about Africa in school, all the maps and globes had been updated to show Zimbabwe in lieu of the old Rhodesia.  So, the Rhodesian reference felt like something from a lifetime ago.  But, it also shows motivation for Bludd to join Cobra as they could offer protection from the governments who wanted to bring Bludd to justice.  The fact that the reference still exists on 2000's era releases, though, dates the character (much like the Vietnam references for Stalker, Snake Eyes and Duke) but also provides an interesting history lesson for those so inclined.

As a figure, though, this Bludd leaves me a bit cold.  I grew up with the brown Major Bludd.  And, as he was one of my childhood favorites, I've found it hard to accept non-traditional colors for the character.  In looking at the various Bludd figures available, there are many options for a brown motif using all of Bludd's major molds.  This particular figure's mold (only the arms, head and chest are new, his waist and legs are from the 1991 Toxo Viper) was never reused in its entirety.  But, the head appeared on the 2003 Python Patrol Major Bludd and again on the 2006 Convention Major Bludd figure.  As the head was sculpted for this chest, I think the 1994 use of the head is the best.  But, you can get the look for Bludd on other figures that aren't as...purple.

Major Bludd's gear was not great.  First off, the weapons included with the figure were all red.  While brightly colored weapon trees were the norm in 1993 and 1994, they were still disappointing.  The upside is that the red gear actually goes well with the figure.  But, they are still red.  The worse part, though, is that Bludd's weapons tree includes a series of lackluster weapons.  The Rock Viper rifle is too big to be useful.  The 1992 Destro's pistol never really worked for me.  (And, I considered it Destro's unique weapon since I actually had a 1992 Destro figure.)  Voltar's weapon is best left forgotten and is one of my least liked gun designs in the vintage line.  (Thanks for the comment on the Voltar weapon!)  It was nice the Bludd got a knife.  But, since he had the sculpted blade affixed to his arm, the bladed weapon seems a bit redundant.

While there are no variants on the 1994 Major Bludd figure or his gear, there are variants for the card upon which he was released.  The early 1994 cards emulated the 1993 card layout.  The filecards were full sized and more akin to those from the 1980's.  The weapons tree was horizontally oriented and the bubble, basically, stretches across the entire cardback.  Later releases, though, spruced up the figure presentation.  The weapons were now vertical and the bubble was smaller.  These were, likely cost cutting moves.  But, they also cleaned up the presentation of the figures on the shelves.  Bludd's later filecard was reduced to a more baseball card sized version that had truncated text and removed some of the bullet points describing Bludd's uniform and gear.  Some variants of the filecards and cardbacks can be more desirable than others.

Major Bludd figures are both not as expensive as contemporary releases and also not nearly as available as they were a couple of years ago.  Right now, mint and complete figures will sell in the $17 range when left to open pricing.  But, because dealers haven't caught up to the lower supply of 1994 figures, yet, you'll see dealers offing the figure for $12 or so.  At the same time, you can still get a carded figure for under $20.  So, that's probably the best way to go.  Also, since Bludd's gear sucks, missing it isn't a big deal.  And, you can get loose figures for $5 without too much trouble.  So, just getting the character makes a lot more sense for a budget minded collector. 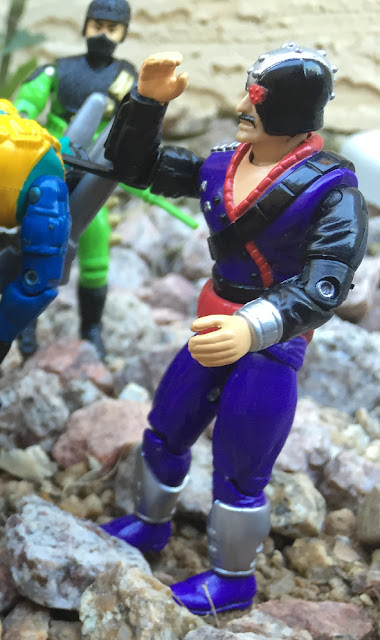 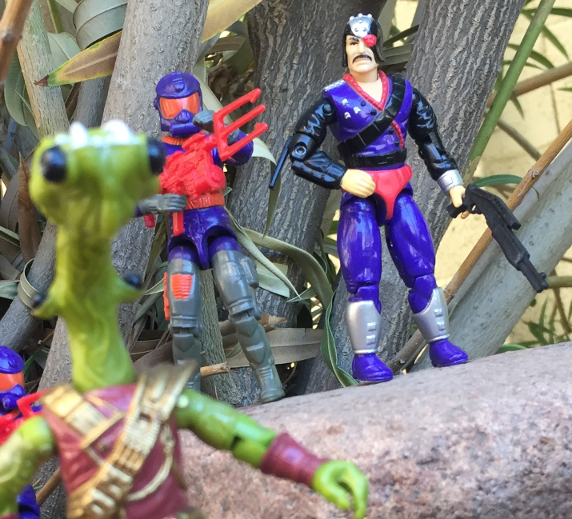 Posted by Robot_Sonic at 1:27 AM
Email ThisBlogThis!Share to TwitterShare to FacebookShare to Pinterest
Labels: 1994, Battle Corps, Major Bludd