Outback was a popular character from 1987.  He got a great run in the comic.  His figure, though, got just one repaint in the Toys R Us exclusive Night Force set.  Six years after his original release, Hasbro resurrected the character.   At first glance, the new Outback design was a radical departure from the minimalist survival expert from 6 years prior.  But, at his core, this new Outback reflected an alternate look for the character and a gave kids and collectors a way to use Outback in more diverse ways.  The figure still retains some of the survival aspects of the original.  But, he now has more trappings.  And, he features some design elements that rarely appeared in the Joe line.

At some point in 1995 or 1996, I found one of these Outbacks at retail.  While the figure didn't match the Outback I knew from 1987, the look was solid enough to warrant purchase.  Once in my collection, though, I did not use the figure as Outback.  Instead, this figure became an army builder of combat engineers.  It was a role I felt was missing from the Joe line.  And, it served a purpose in my collection at the time.  These characters would be part of a convoy and would be called upon to fix damaged vehicles, solution a way to cross a river or gorge and might even have to improvise a weapon that was capable of defeating an unforeseen enemy.  The characters were part soldiers and part Mr. Fix-Its.  But, that was a perfect way to create tension and conflict within the Joe team.

Often, the engineers were only mildly trained soldiers.  Sure, they had been through basic training and could use weapons.  But, after that, they were almost exclusively focused on technical expertise.  As such, they weren't much use in a firefight.  But, they took up valuable space in the convoy that might have been better utilized with another machine gunner or hand held artillery trooper.  On the occasion where engineering expertise was needed, though, the script flipped.  Here, the engineers would bark orders at the combat troops, asking them to do basic tasks.  Tasks that they often didn't understand.  This would frustrate the engineers and they'd often end up accidentally exposing themselves to enemy fire when they went to do something themselves.  Once the engineer was dead, the Joes had to figure a way out of a situation without their technology.

In the years since, though, this Outback hasn't been all that important.  From time to time, I'd break him out to join some other more brightly colored 1993 releases in a photo shoot.  Though, I'd often reach for the Eco Warriors variant instead.  But, I still only see this figure as an engineer.  I don't consider him Outback.  The 1987 sculpt is just too iconic.  But, at the same time, this 1993 figure is just too strong to ignore.  So, even after 25+ years, this figure remains, primarily, in the specialty I set for him when I first acquired him at retail.  There's some value in that consistency.  And, as this figure looks good with a variety of vehicles, he also remains relevant as a vital part of any motor pool.

The 1993 Outback mold is well sculpted.  He has a canteen and knife on his chest.  And, the figure has a bit more bulk than those from the '80's.  He has some odd wrappings on his forearms and blue trim on the top of his boots.  (According to the filecard, these are Outback's personalized wool hiking socks.)  To me, these things make him unique.  To others, they make him weird.  Neither is right nor wrong.  It's just how you perceive the figure.  (And, I'd wager that most collectors who grew up in the '80's view them as weird while those who came of age in the '90's find they give Outback character.)  The cargo pants aren't overdone, but are nicely detailed.  The main calling card of the figure is the head.  The black hard hat is a feature rarely seen on Joes.  (Hardtop and Tollbooth are the only other two who come to mind.)  So, it's appearance gives this Outback a distinct look.  The face is well sculpted and the bright orange beard that was Outback's calling card is still there.  It's just a bit better trimmed this time around.

Outback's weapons are red.  Sadly, he was given a decent accessory tree.  But, all the weapons were red instead of something more useful.  (In the 1993 Toy Fair Catalog, though, Outback was featured with purple weapons.  The hue that appears in the photo was never released with any figure.  You'll note the weapons on Outback's card art are a light purple instead of the deep red included with the figure.)  While I wasn't a huge fan of alternatively colored weapons in the 1990's, I was able to find a use for them and my Outback used the red Hit and Run rifle right from the minute I opened him off the card.  The red Big Ben rifle would occasionally see use.  But, often, I'd give it to a spare 1994 Viper if I didn't have a second 1994 Flint black version of Ambush's rifle for him.  Outback also had a red version of the Ambush rifle.  But, for some reason, I never really used it.  He was rounded out with a red battle stand and the requisite blue spring loaded missile launcher with two missiles.

Outback was used three times.  The first release was intended to be part of the Eco Warriors sub team.  But, when that concept was cancelled for 1993, the rainbow colored figure found its way into the standard Battle Corps line.  Hasbro quickly changed the paint job, though, and released this more subdued Outback later in the year.  Around 1995, the best version of the mold was released in Brazil.  The Marfim figure is a great combo of green and gold and lacks many of the more distracting colors.  In the late 1990's, carded Marfim's were an Ebay staple and you could get them cheap.  Then, the figure disappeared for about a decade.  When new ones started popping up in the 2010's, the $30 price tag was now over $100.  And, Marfim figures have not fallen in the decade since.  It's too bad as Marfim shows this mold's value.  It's also sad that Marfim was released in Brazil with the Headhunter and Gristle molds.  So, Hasbro had it available for a convention set in the 2000's.  But, they never delivered the mold again.  Just think how great it would have been to get Outback in ARAH form during that time!  Even this mold would have been welcome.  But, it was not to be.

Like all 1993 figures, Outbacks have gotten a bit harder to find and a bit more expensive in the last two years.  While dealers will ask $20 or more for a mint and complete with filecard Outback, the reality is that carded versions can be had for $25 and you can get the loose, mint and complete figures for around $12 without too much trouble.  Just the figure will cost about half that.  There's enough supply that you don't have to wait too long to get a version of this figure.  So, that helps make the decision to acquire one.  I have long found this mold to be of value: whether you use it as Outback or a new character.  For older collectors who grew up with Outback's scraggly mountain man look, seeing this figure as Outback might be a harder sell.  But, the mold is strong and the price is still right for this figure.  So, it probably doesn't hurt to pick one up regardless of your feelings about this new look. 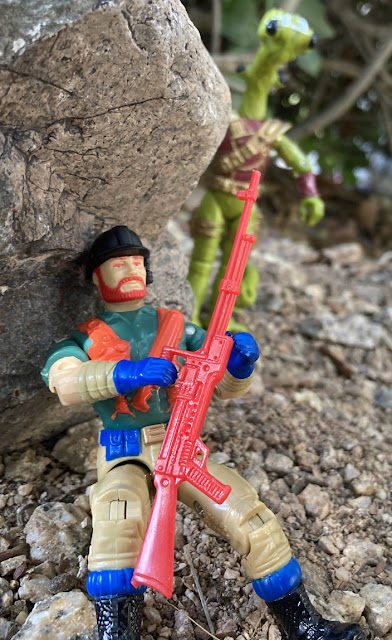 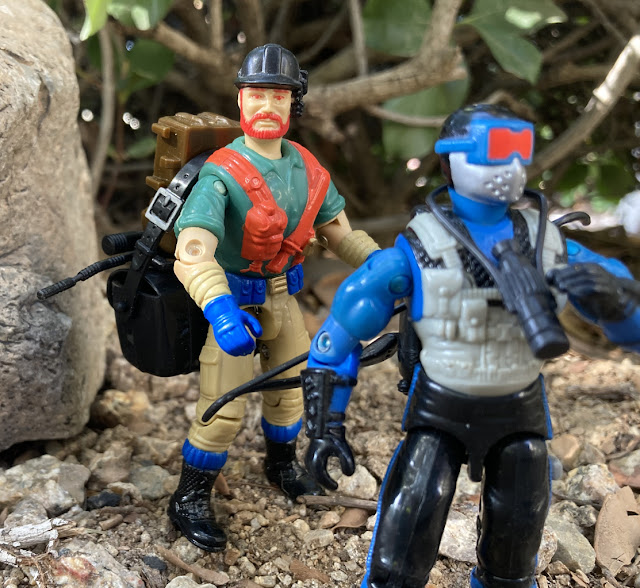 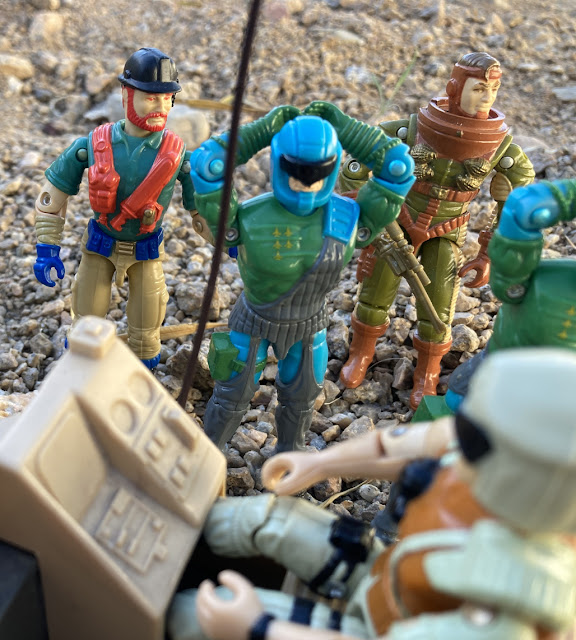 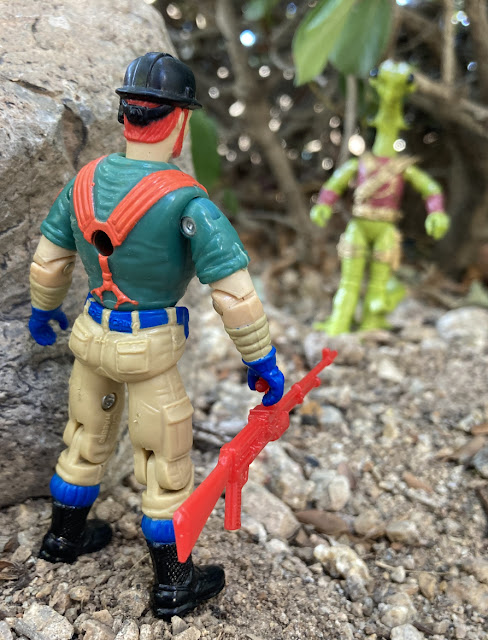 Posted by Robot_Sonic at 2:15 AM
Email ThisBlogThis!Share to TwitterShare to FacebookShare to Pinterest
Labels: 1993, Battle Corps, Outback