I have never really been a Sky Patrol fan.  I'm not sure why.  But, even in my heady collecting days when I bought any and everything, Sky Patrol was never a focus.  In fact, until the acquisition of this figure, I actually owned more Brazilian Patrulha do Ar figures than I did of Hasbro Sky Patrol.  Even looking at everything I've ever owned, the two series are tied and I've even owned more of the unproduced 2003 Sky Patrol Wal Mart figures than I have 1990 Sky Patrol.  For some reason, Sky Patrol wasn't something I actively sought out.  And, due to their general release type and scarcity, they were not something that often appeared in lots of 1990's figures that were the staple of my acquisitions back in the early 2000's.  So, I have not had occasion to really examine Sky Patrol in quite a while.

Recently, though, I came across some Sky Patrol figures at a local haunt.  I could choose between an Airborne and a Altitude.  While I've long wanted Airborne due to his distinct look, the Altitude figure was in better shape, the same price and fully complete.  So, I went with Altitude and didn't look back.  Once in hand, I found the figure a nice addition to my collection.  The newly sculpted head for the character was very distinct.  His colors are muted, complementary and not often seen on vintage Joes figures.  And, the mold chosen for his body makes sense in the context of his specialty.  In short, he's a solid figure that expands my collection in a different direction than most of my neon-heavy acquisitions.

All of the Sky Patrol figures were repaints of pre-existing vehicle drivers who were given new heads.  Some of the bodies chosen were Joe and some were Cobra.  It was a cheap way for Hasbro to make new figures that included expensive accessories like the parachutes.  The unifying theme of the figures was that they all included chrome colored parachutes that were packed into repaints of the 1985 Parachute Pack case.  Along with the new heads, each figure included an array of unique accessories.  The calling card, though, were the unique helmets that were given to each figure.  No two figures got the same helmet, but all the characters wore them to give the team a modicum of uniformity.  Each figure also included new weapons.  Some were better than others.  But, all were distinct to the Sky Patrol theme.  The end result was that parents were asked to pay a premium price for a product that appeared new and an adequate value.  Even for collectors of the day, the radically different paint schemes on the bodies as well as the elapsed time since their last use helped make the Sky Patrol figures all feel new and worth the extra price.

The Sky Patrol figures, though, lack a real uniformity in their appearance.  While the chrome parachutes tie them together, each figure is individually colored.  Skydive and Static Line share blue and silver hues.  But, the blues are drastically different and Static Line features some off white.  Airwave is cast in tan and pea green.  Airborne is all grey.  Altitude and Dropzone both feature brown.  But, Dropzone's is offset by grey instead of Altitude's green.  In short, the figures look less like a subset as they had previously existed in the Joe world and more like a group of individuals who shared a specialty.  There's enough complementary colors that you can kind of see them together if you really reach for a theme.  But, that also allowed for any kid who just got one of the figures to be able to find a special place for him without feeling cheated that he didn't have the rest of the team.

In thinking about Sky Patrol, it hit me that there really isn't a breakout character among the members.  This struck me as odd.  But, in other subsets, the popularity of a figure is usually determined by the popularity of their original release.  (Think Tiger Force Flint or the Python Patrol Viper.)  Figures like Cesspool, Headhunter and even the Star Brigade Roadblock have found some breakthrough success.  But, they are the exception rather than the rule.  All of the Sky Patrol figures remain about equally difficult to find, in same price range and appear with the same frequency in old collections.  That's probably due to them being packed at equal ratios as well as all being good guys.  Were there one or two Cobra villains in the subset, I'm sure they'd command premium prices over the Joes.

Altitude pretty much sums up the uses I find for Sky Patrol figures, though.  He looks great in the Tomahawk.  Though, I also suspect he'd fit in nicely with both the Razor Blade and Dragonfly.  As part of the helicopter crew, his flight suit makes sense.  The helmet is icing on the cake for this role.  But, I can't really see Altitude as a ground trooper.  I'd much rather give his gear to a different figure for that role.  Altitude's colors work better for ground missions than some of the other Sky Patrol figures.  But, he's still a stretch.  So, it's likely that he'll simply man one of my choppers.  Here, his colors will work and he'll fit within a specialty.  I like figures like this because not everyone on the Joe team can be all things.  The point of an elite unit is that they have extreme specialists who are the best.  A guy like Altitude might lead a team through a high altitude parachute jump.  But, once on the ground, he was sort of a tag-along.  He had a role and did it fantastically.  But, once that's done, there's less use for him.

About half of the Sky Patrol weapons are awesome.  The other half are not.  Unfortunately, Altitude falls into the latter category.  His weapon is just inane.  He includes a small pistol that looks like the kid brother of the 1987 Blaster's gun.  It's lame and uninteresting.  Then, though, it takes a turn to the absurd.  Altitude's gun has a slot where a blast shield affixes to it.  Then, a missile affixes to the blast shield.  So, Altitude's little pistol becomes a missile launching bastion of death.  Of course, if he uses it in his right hand, Altitude will be the one dying.  In this direction, the blast shield would protect Altitude's gloved hand and covered arm.  All of the blast from the missile rocket, though, would be directed straight into Altitude's uncovered chin.  I guess it works as a left handed weapon (like the Alley Viper's rifle).  But, the whole set up is just bad.  The engineering to make a three piece weapon was rare in 1990, though.  So, it represented a step forward in Joe accessory design.  The design was just not very good.

Altitude uses the mold from the 1986 Slipstream figure.  Neither this body nor the new head sculpted for Altitude were ever used again.  (There is a red Slipstream from Italy named Jet Man.  But, it's likely that figure was created from a Hasbro Slipstream instead of them actually having the mold.)  It's a shame.  As, the Sky Patrol heads would have been a fun way to update some repaints in the 2000's.  But, Slipstream being both a Joe and a pilot makes him a perfect choice to get the repaint treatment in Sky Patrol.  Altitude having a flight suit with built in survival gear works for a guy who would jump out of airplanes at high altitudes.  And, the coloring is different enough that it's not completely obvious that Altitude and Slipstream share the same body.  (The fact that Slipstream isn't a very popular figure also helps!)  All of the Sky Patrol figures were colored well enough that the mold sharing isn't overly obvious.  But, Altitude, in particular, brings new life into an existing mold that didn't have a great paint job the first time it was used.

The last oddity about Sky Patrol is that they were released in a year that also saw a paratrooper released in the standard carded line.  Freefall debuted in 1990.  In terms of design and gear, Freefall is probably a superior release.  But, he didn't include a working parachute.  If you bought Sky Patrol figures in 1990, the only Joe aircraft on the shelves were the Locust, Mud Fighter and Retaliator.  So, the repaint of the 1986 Night Raven in the Sky Patrol line was the only real airplace for Sky Patrol.  And, a super sonic jet isn't really the type of thing that drops highly skilled paratroopers behind enemy lines.  But, were I a kid in 1990, I wouldn't have let the lack of planes stop me and I'd have found ways to insert a Sky Patrol figure into a situation, even if all I had was a single jet pack.

Dealers will sell mint and complete Altitudes in the $60-$80 range.  The higher end of the range usually includes the filecard, too.  Left to open pricing, Altitude is about a $45 figure.  That's not terrible in this insane market.  Especially when you consider the high price of Night Force and even Tiger Force figures.  Sky Patrol has always had its following.  And, you don't find high quality, complete figures like you used to.  Altitude is one of the stronger colorings for the subset.  And, his helmet isn't bad.  Really, after acquiring him, I wondered why I haven't gone after figures like Altitude before.  I buy Cobra army builders that cost more than a Sky Patrol figure.  So, there's no excuse to not own more.  Maybe it's time for me to accept that, enjoy the concept and finally go about finishing my Sky Patrol collection. 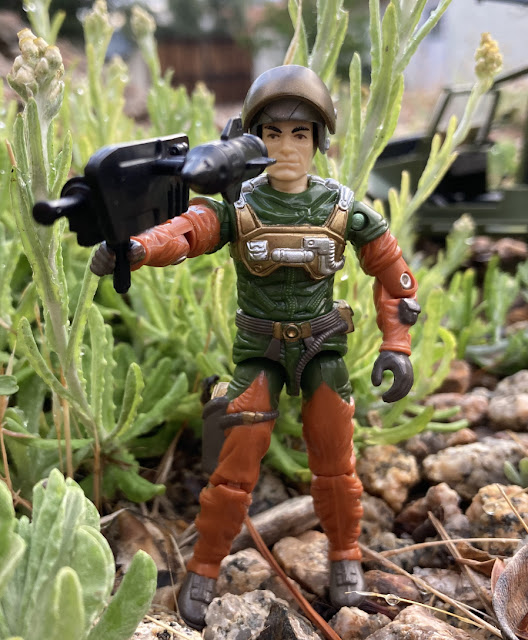 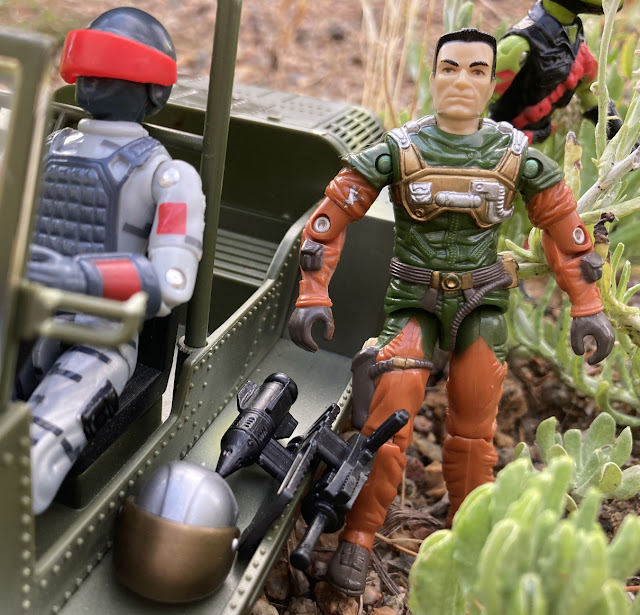 Posted by Robot_Sonic at 1:01 AM
Email ThisBlogThis!Share to TwitterShare to FacebookShare to Pinterest
Labels: 1990, Altitude, Sky Patrol