In 1994, I came home for Christmas and was in search of Joe toys. I went to TRU and picked up a 1994 Shipwreck, a 1994 Dial Tone, and a couple of other guys. I was highly disappointed that I couldn't find a Headhunter. (It is a disappointment that continues to this day.) On my way home, I decided to stop by a K Mart that was going out of business. In here, I found, on clearance, a SHARC 9000 for $5.00. This was a deal I couldn't pass up. While I really didn't want any vehicles, I am always a sucker for boats. (The hovercraft and hydrofoil rank no.s 1 and 3 respectively on my list of favorite vehicles.) I managed to sneak the SHARC into my parents' house. (Some 21 year olds sneak booze, drugs or porn into their parents' house when they are home on break. Me, I sneaked toys.) Once I got this sucker opened, it was awesome. Sure, the colors weren't the best, but it was great fun to have a new boat. I always loved the gun turret on the hydrofoil. The one on the SHARC was even better. (It actually shoots water!) I had the new Dial Tone man the turret, Shipwreck took the second chair, and Cutter was at the helm.

I've always liked Cutter. The original hovercraft is my favorite vehicle of all time and I had always used the original Cutter as a high ranking Joe who was always in charge of his craft. My only problem with that original figure was that it wasn't much fun to play with outside of the hovercraft. This version of Cutter solved that problem. The toned down look still allows for the figure to have a sculpted life vest, but it doesn't overpower the figure like it does on the original version. The 1992 Cutter, which was available as a carded figure, kept the orange life vest, but this version took a more militaristic approach and used the subtle green. It is odd that the vehicle this figure came packaged with is so mis-colored while the figure is actually very good. Cutter is very basic and doesn't suffer from overkill like so many of his contemporary releases. He proved that Hasbro was still capable of making great figures that didn't scream for attention, they just were too lazy to do so.

Most hard core collectors don't really like the SHARC 9000. It is a very poor substitute for a hovercraft or hydrofoil, but by 1993, the days of vehicles of that calibre were long gone. This figure suffers from his vehicle's lack of popularity. You don't often see him and never hear about him in any collecting circles. It's really too bad as this figure is very worthy of at least a little attention. He doesn't have anything that is really detrimental to his appearance, though the orange hair is a bit Ronald McDonaldy. Still, this figure remains high on my list. I've found myself substituting this figure for the original Cutter on my original hovercraft. He works so much better with the military colors. Cutter is just a fun figure to have around. I fully plan to man my aircraft carrier, when I get one!, with a couple of 1992 Cutters to complement my 1984 Cutters, all my versions of Shipwreck and about 4 1998 Navy Seal Teams. When the mission requires a hovercraft to recon or attack, though, the 1993 Cutter will be at the helm.

Like the other 1993 vehicle drivers, Cutter can be problematic to find. Not many people were in to vehicles near the end of the line and none of them saw a high production run. In fact, the line this figure was originally intended for, the D.E.F., was cancelled before the figure was even released. As such, you don't often see him for sale. Like most of the later edition figures, though, Cutter suffers from the Collectors' Paradox: this is a hard figure to find, but since he is not highly sought after, he remains cheap in price. Many people don't even know about this version of Cutter. The 1992 version is cool, but often overlooked. This figure, though, beats the original color scheme in almost every way, including collector obscurity. 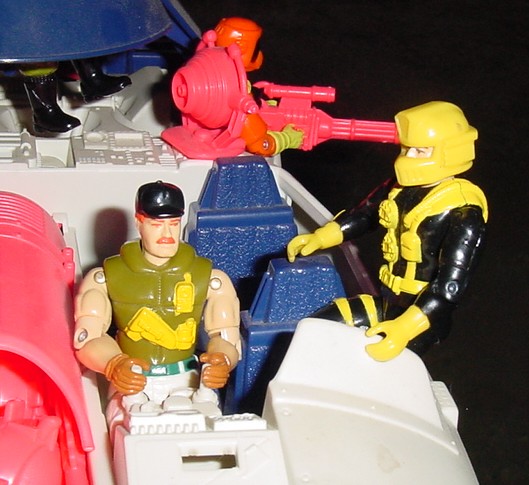