In 1991, Hasbro attempted to reinvent the earlier gliders with some new entrants to the working flying toy genre. The results, shall we say, were grim at best. We are left with unpopular toys that included unpopular figures. Most collectors know little to nothing about the Night Vulture. He is as forgotten as they come. His vehicle is relegated to bargain bins and total obscurity. The figure follows that pattern. I don't think I have ever heard this figure being discussed in any manner in any forum regarding Joes. Usually, obscure figures come up every now and again. This guy, though, is one of the few figures that most collectors don't even care exists. While he is requirement for completists, casual collectors can easily overlook another of the line's shadowy support figures.

When I first got the Night Vulture, I thought he might be kind of fun to have around, but didn't do too much with him. As months went by, I found him to be the perfect companion to Interrogator. These two quickly found themselves as Cobras top torture men. I have them as lesser officers who answer to Cobra Commander, but don't have any authority over any troops who aren't security minded. At some point, I hope to find a Cobra figure that will make a good secret policeman who will be a member of a top cadre of recruits who do the Commander's bidding and answer to Night Vulture and Interrogator. At that point, these two figures might become more prominent. As it stands, though, they get considerably more time in my collection than many other figures from more popular years and subsets. He's another figure whom I have made into an interesting, for me anyways, character. In my collection, he is not another faceless Cobra minion. He is, instead, a dangerous boot licker who is a bit too close to the Commander for many of his superiors' liking. As such, he makes for an excellent character to add depth to a story. He is not a headliner, but is a very nice backup figure who bides his time.

This guy's color scheme is very interesting. The purple and black are very nice, but the orange highlights ruin what could have been a very nice figure. Still, the color scheme is not so bad as to preclude this figure's use in my collection. He is very detailed. His mask has ties molded on the back of the figure's head. He has all sorts of cool gadgets that show this guy was still part of the figures that actually received attention from the sculptors. This guy just screams for a repaint. If I can ever come across another one that isn't too expensive, I'll redo this guy without the orange. I think it will make for a figure that will certainly attract people's attention. Especially when they learn the mold is unaltered. He also comes with a cool crossbow/machine-gun accessory. It has crossbow bolts, but also has a clip and a barrel with cooling grooves molded into it. It is another of the obscure vehicle driver accessories that never get the press they deserve. Had Snake Eyes not been released in 1991, I think this mold would have made for a nice version of that figure. Alas, if that is the Night Vulture's only claim to fame, you can understand why collectors pass him by.

Night Vultures are kind of tough to find. Not many people are after them, but not many people have them. As such, many collectors simply pass by this guy. He is almost never offered for sale, and can only occasionally be found in lots. I got mine in a large lot of vehicle drivers about a year and a half ago. I don't think I've ever seen another one for sale since then. This is just not a guy people know about. As such, pricing one can be difficult. He is certainly not a popular figure, though, and shouldn't draw a lot of interest if one would appear for sale. He is an interesting figure, but not all that great. He's just another of the faceless Cobras that came out in the 1990's that no one pays attention to or even cares about. He is a different figure to have in your collection, though, and provides a nice figure whose character you can mold as you please.

This guy is nice to have, but one's enough. If you like the Night Vulture, email me. 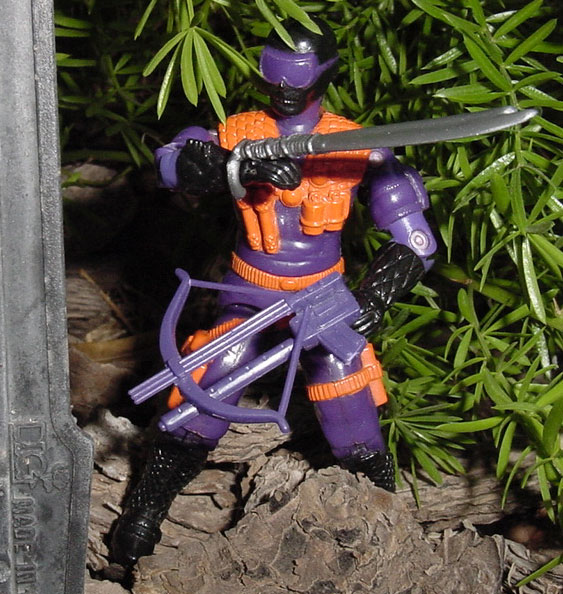 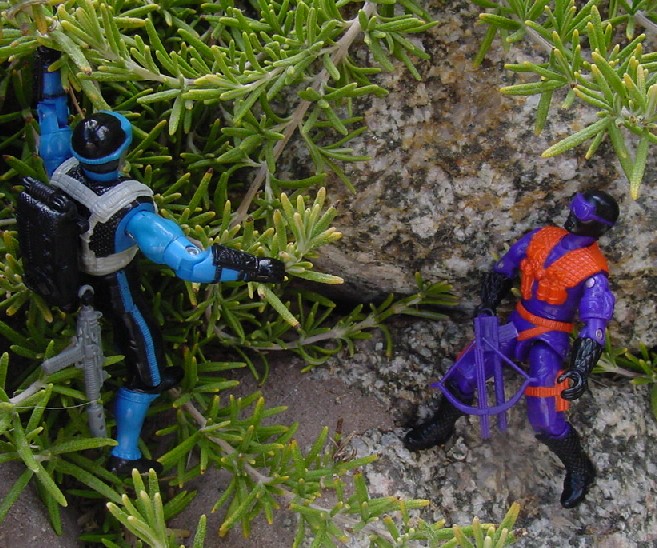 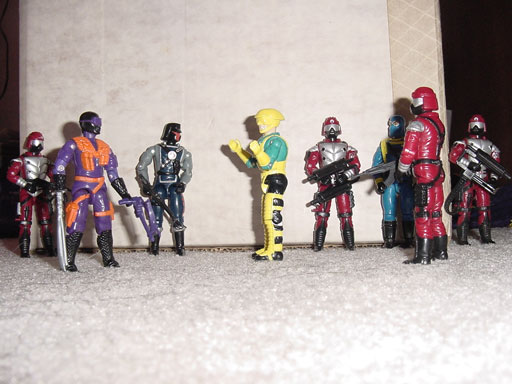