Eco Warriors. UGH! That is the most basic response whenever you mention the subgroup every Joe collector loves to hate. The Eco Warriors line is almost universally despised. Some don't agree with the Captain Planet type message. Others consider these guys to be the harbingers of the neon to come. Me, I like them. I've made it known that I don't mind neon figures, if the neon fits the figure's purpose. In the Eco Warriors line, it almost always did. All of the 1992 Eco Warriors figures are of the very highest quality. Flint has become one of my most used pilot figures. Clean Sweep makes an army of my airport firefighters. Ozone is my experimental pilot. Cesspool is one of the highest ranking pilots in the Cobra army. The Toxo Viper, well, he's my Cobra deep sea diver.

When I profiled Deep Six, I showcased an area where Joe was under represented; deep sea warfare. Deep Six is the perfect Joe for deep water missions, but Cobra never got a suitable counterpart. The Toxo Viper fills that void nicely. He has a bulky sculpt that makes up for a pressure suit, air hoses sculpted on a cool helmet, and a pack that has tanks on it. This guy just screams to be used under water. The reason I profiled this figure here is just for that reason. When I got my first Toxo Viper about a year and a half ago, I thought he would make an excellent deep sea diver. At that time I was more into other aspects of Joedom, though, and didn't really use the figure. Last weekend, I took my first Joes out in the pool. I grabbed two '93 Star Brigade Roadblocks and one Toxo Viper. The minute I got this guy in the water, I was floored by how cool he is. He just looks good whether he is floating on the surface or walking across the bottom. I think I'll use them as Cobra underwater technicians as well. He looked very cool attached to the mouth of my "Creepy Crawly" that sweeps the bottom of the pool.

This figure is very aesthetically pleasing. The subtle purple and greens are very easy on the eyes. They are also colors that would work underwater. The red mask is also kind of menacing and gives this figure the type of mean look you would want to convey in the deep sea. His accessories are very nice. The pack has toxic leakage molded onto it. It is a nice feature, but not noticeable enough to preclude the other uses I've prescribed him. His gun is also futuristic enough to look good underwater. Since it isn't based on any weapon I know of, you can do just about anything you want with it. Sure, the accessories are purple, but they work with this figure since the color scheme is so nice. The original Toxo Viper was a very cool figure. His helmet was neat. This guy, though, takes the playability factor into account. The original Toxo Viper looks better than he plays. With this guy, you have no such dilemma. He is very nice to look at, but is also great fun to actually use. I've given thought to also using this guy as a astronaut as well. I think he would work in that environment and would be a perfect enemy for my Star Brigade masses.

The Toxo-Viper mold was never used again. The mold inspired the Toxo-Zombie and the figure's legs were used on the 1994 Major Bludd figure. Since then, the figure has been MIA. Hasbro dusted off the figure's contemporary the Sludge Viper, but the Toxo Viper mold has not appeared since. The figure was not sent anywhere else in the world that we can discern so it is possible that Hasbro would have access to the mold. It would be a solid candidate for either a Convention figure or another, exclusive release. In better colors, this figure could easily be useful for many collectors.

Toxo Vipers are kind of a pain to find. The Eco Warriors were more desirable to younger children than the serious collector. As such, you can often find non-mint, incomplete Eco Warriors figs, but mint complete specimens can be a bit elusive. The Eco Joes appear very often, but the Cobras are especially troublesome. I've managed to track down two Toxo Vipers and one Cesspool, but have never even seen a Toxo Zombie. Fortunately, collectors as a group disdain these figures. They don't even give good figures like the the Toxo Viper a chance. As such, when you find these guys, they won't hurt to old pocketbook like most of the other '91 Cobras will. If you can find them, they make excellent army builders. If you have any inclinations to take your Joes under water, I consider the Toxo Viper an essential part of any Cobra underwater attack force.

I like this guy and would like about 6 of them. If you have any available, email me. 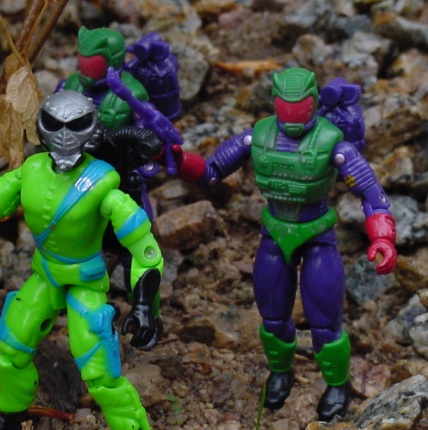 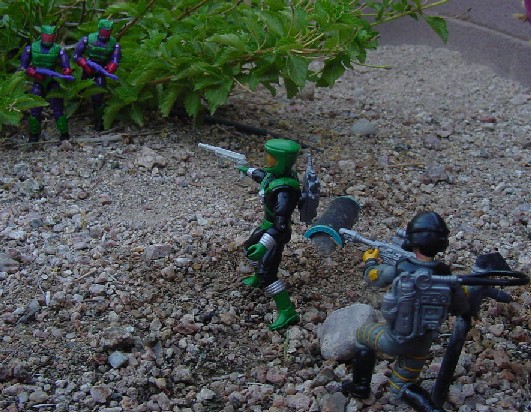 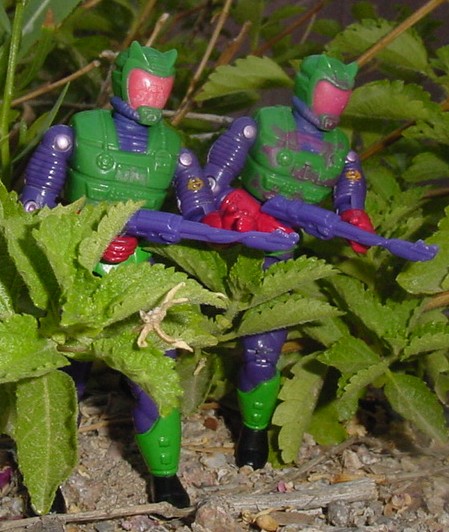 Posted by Robot_Sonic at 9:00 AM
Email ThisBlogThis!Share to TwitterShare to FacebookShare to Pinterest
Labels: 1991, Eco Warriors, Toxo Viper