Like the Night Vulture, the Interrogator is a figure that has found some cool uses in my collection. He is, as his name suggests, Cobra's interrogation specialist. I use him as a powerful individual who has realized that he must bide his time and build the Commander's confidence in him. He is a character who is very strong and inspires fear even among his superiors. He often accompanies Major Bludd into battle, though he stays out of the way. After prisoners have been taken, he may either interrogate them for information, or simply torture them for sheer pleasure. I also use him as the base commander who is in charge while the more combat heavy field generals are off fighting. It during this time that he builds his power and experience. He's one of my lesser characters that, given a chance, may become more important as time progresses.

This figure has so much potential, it isn't even funny. This is a great idea for a character, but the execution into an actual figure leaves much to be desired. This guy's mold isn't all that impressive. He's just a basic figure with no real distinguishing characteristics. Unlike the figures I normally like, who's simplicity is their greatest asset, this guy's mold just isn't all that great. They tried to make him busy and have the mold be on par with other '91 Cobras. Where they failed, though, is that they took the middle ground. This guy isn't flashy, gaudy, and full of unique accessories and molds like the Desert Scorpion, nor is he very basic, yet strong like the mighty Crimson Guard Immortal and the Incinerator. Interrogator is an unhappy medium where his chest has all sorts of things happening, while his helmet and legs are very calm and sedate. As such, he isn't a figure that has found much time in any area of Joe collecting. That, though, seems to be changing. As many collectors have grown up and become more interested in the characters behind the figures, Interrogator, much like Mercer, has started to take on a second life. He is starting to appear in both works of fan fiction and dioramas. As I have said, he is a specialty that seems to be necessary to an organization like Cobra. The fact that it took them almost a decade to come up with him, though, says much about Hasbro's efforts to really explore Cobra.

I started using the Interrogator the minute I got him. However, he quickly fell out of favor and disappeared into his drawer. A couple of weeks ago, though, I needed him. When I pulled the figure and his gun out into my rotation, I was fascinated by the possibilities he offered. As I have said before, I like prisoner figures. Usually, though, I use them on the Joe side. Law, Dialtone, Crazy Legs, Shockwave, Mace, Mutt, and a host of other figures are just too realistic. When I decided to do the prisoner angle from Cobra's point of view, Interrogator was a natural choice. I shudder to think what those pincers on his gun would do to a poor, captured soul. Needless to say, many of my prisoners have suffered at this guy's hands. Currently, he is one of my "featured figures" who is not kept in his drawer, but, instead is out, ready to be used. I don't know why I associated him with the Night Vulture. I think that both are such obscure figures that they just naturally go together.

If you look at the Interrogator figure, you see that he is draped in basic Cobra blue to go with his black, grey and red. As such, he actually blends with pretty much every standard Cobra army builder from the peak years of the line. That is a fact that is easily missed when you first look at the figure. But, once realized, the true value of this figure comes to light. Interrogator can be used in conjunction with the earliest Cobras or stood among those from the modern take on ARAH figures and still fit in. That is a rare combination for a figure from 1991. Especially for a figure that represented an all new character.

Where, oh where is the Interrogator mold?!? Hasbro used it in 1991 and again in 1993. But, the trail runs cold there. However, Hasbro has pulled out many of Interrogator's contemporaries so it's likely that the mold is out there and could easily be used for a new version. As the mold has so much potential, it would be great to see a newly colored version of this character. But, since this version is still very good, if we never see the Interrogator revisited, at least we have one version that is nearly perfect.

Interrogator's aren't too tough to find. The Battle Copters figures seem to appear from time to time. The mail in version, though, seems to come up for sale much more often. (This is the same mold as this figure, but is cast in pastel, neon yellow. Needless to say, it is a very interesting color choice.) Neither version, though, will cost you much. The original's gun, though, is kind of hard to find in mint condition. The prongs are very thin and brittle. They are prone to breakage, bending and warping. You can still usually find the figure with his gun. Like most of the '91's, you will have your best luck finding this guy in large lots. He isn't popular enough to be found by himself. Like other characters who have found a second life in fan fictions, though, Interrogator's popularity may increase in time. Collector's tend to like this guy. As such, he may not always be as available as he is now. As such, now is the time to add this guy to your collection. He is nice figure with cool accessories who will find as many uses in your collection as he has in mine.

This is another cool figure that I don't want any more of. I've you've found any cool uses for this guy, email me. 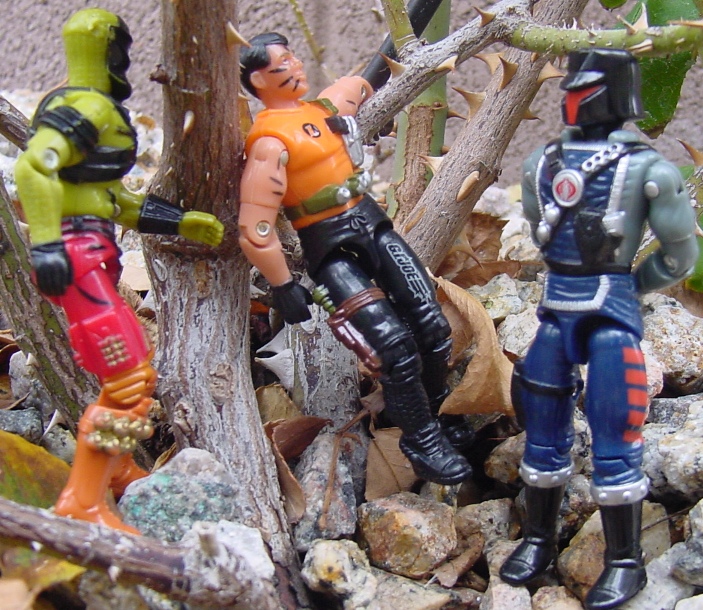