In the late spring of 1993, I headed off to England. I left three days after I got home from school and wouldn't come back for almost 3 months. While I was overseas, I picked up an occasional USA Today and saw articles talking about this new movie that was causing waves back in the States: Jurassic Park. It was not released in Europe while I was there, though, so there was no international hype surrounding it. Also, these were the days before graphics capable browsers, cheap PCs and the ubiquitous internet. I knew little about the movie. When I returned to the States, the phenomenon was over. Shortly after my return, a friend and I went to see Jurassic Park at the dollar theatre. Frankly, I felt I paid $1.00 too much for that piece of tripe. I thought the movie awful. Somewhere, there is a computer wallpaper done by someone at Lucas studios saying "Plot does matter." in the same style as the Godzilla posters. While I'll leave it up to you to decide if the saying should have applied to Episode I, it certainly did apply to Jurassic Park. Had the movie a good story behind it, characters you could actually care about or were interesting, or anything other than some poorly contrived computer generated dinosaurs, I might have felt differently. The point of all this is that dinosaurs were hot. Kids wanted them in any form they could get. How did Hasbro respond? By making the truly terrible Dino Hunters playset.

This playset is terrible. Apparently, Cobra has created some dinosaurs to use as weapons or some other lame concept. It appears that Cobra, though, only managed to create color blind dinosaurs, as the two figures the Joes sent to capture the mighty beasts were decked out in a nice array of bright, neon colors. (Just what you'd want to wear as you go traipsing through the jungle.) The worst part about this whole debacle is that they bastardized two figure molds that were actually very nice to begin with: the 1991 Low Light and the 1990 Ambush. In my profile of the 1991 Low Light, you can tell that he is one of my favorite figures. I use him in just about every scenario. This Dino Hunters version, though, will probably never be released from his baggie prison. He is just too awful a figure for which to ever have any use. Had they kept Low Light's features dark, and recolored the neon yellow chest and arms into a nice cammo pattern, this figure could actually be a very nice update to the original. Alas, in 1993, sound decisions were not being made in regards to the Joe line. Instead of nice combat troops, we got neon colored dinosaur hunters.

There really isn't too much to say about this guy. He is one of the less often seen Joe figures, but that's only because his color scheme is so bad. Normally, I like neon figures. This guy, though, just doesn't do it for me. His specialty requires the dark colors of his original version. If he were an astronaut, I'd think the color scheme nice. I think Hasbro had a surplus of this colored neon yellow plastic. They recast Deep Six in it. They also gave it to this guy. In 1993, there was no rationale behind Hasbro's treatment of the Joe line. Truthfully, I think it was the 1993 fares that killed the line off. 1994 was a last ditch attempt to save it, but the Hasbro-Kenner merger put an end to what could have been a Joe Renaissance. Alas, what might have been....

As this guy is in a laughable playset that was only available at Toys R Us for a limited time, he is tough, tough, tough to find. Beware, as his visor, unlike the 1991 version's, does not have red paint on it. His weapon tree was also available with a few other figures. Needless to say, an unsuspecting collector can be easily duped into spending quite a bit of money for a figure that is not complete with his original accessories. That being said, this guy does command a premium. However, I picked up this MIB specimen for under $15.00 shipped. Many kids had this figure, as toys with dinosaurs did sell well, but that is why so many specimens on the second hand market are broken, loose, incomplete, and have extensive play wear. This is one of those figures that many collectors put off buying. He is hard to find, expensive to get complete, and not very cool. Were I not a completist, there is no way I would have ever purchased this figure. As it stands now, the only use I will ever get from him is this page. I have never found most of the expensive Joes to be worth the money. You get the ability to say you have these hard to find figures, but they are so expensive that you are almost afraid to play with them. When I break a $2.50 figure, I don't feel bad. When I break one that will cost $15.00-$20.00 to replace, I'm a little more upset. This guy: he's an interesting figure that speaks much for the pop culture of the time in which he was released. Is he worth the money? I'd have to say, no.

Do you have a Dino Hunters Ambush for trade? If so,email me. 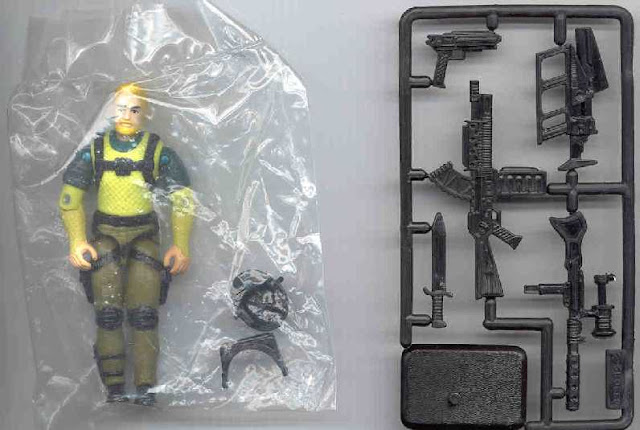