Mutt is a fan favorite. He is a cool character that came with great accessories and a dog. Many people hold him high on their sentimentality lists. When it comes to Mutt's four versions of figures, though, they only talk about the first one. Sure, it is a great figure and may see itself profiled here some day. However, the 1992 version is at least worthy of the original and is a perfect update for a classic character. This guy is certainly Mutt, which is more than can be said for many remakes. He is a DEF figure, which is usually two strikes against most guys, but this Mutt is well worth another look. He is a nice figure that has found a prominent place in my collection.

I like security figures. Many of my adventures surround prison breaks and the like. As such, I like guys who can be used in a law enforcement capacity. Law, Mace and Shockwave are just a few of the minions who make up my security forces. This version of Mutt is often the officer in charge. (The original version is so good that I use it as Mutt.) He has an air of authority about him that makes him my best choice for the commanding officer. I use this guy as grizzled commander who is very good at his job, but lacks personality. He works very well on all sorts of missions. I use him in vehicles for prisoners in transit, at prisons for good old fashioned jail breaks, or as an old security officer who ensures the Joe headquarters isn't vulnerable to penetration. He's just a fun figure to own and looks good with a large number of the other figures who get a lot of play time in my collection.

The one facet where the designers let this figure down is the molded communications piece on the figure's head. Had this guy been released in the late '80's, the comm device would have been removable. It would make this figure much better. Sadly, though, by 1992, such innovation was gone from the Joe line. The molded comm device looks okay, but serves as a sad reminder of the line's past glory. Other than that, though, the figure is great. He has a solid mold, though no removable helmet, a great color scheme, and a face sculpt that is very reminiscent of the original Mutt. This figure kept the updated version of a classic character as true to the original as any other remake in the line. The molded dog biscuits are a bit hokey, but they do show that there was some attention to detail still being paid to the line.

I hate the spring loaded accessories that came with the '90's figures. There are, though, three or four exceptions to that rule. Mutt's spring loaded net launcher is one of them. It is a really fun toy. The net is very cool and has weighted balls on it that allow for you, unlike Ambush's nets, to actually use it. The launcher leaves a little to be desired, but is the only spring loaded launcher I keep in my accessories box. (The rest are in a bag tucked away on a high shelf.) The net launcher is definitely an accessory everyone needs. Mutt's other accessories are adequate at best. His gun is cool, but nothing special like the original figure's silenced Mac-11 was. Junkyard, the dog, is Junkyard. I don't use dogs, or any other animal for that matter. I just don't have any use for them. It's the same Junkyard mold that came with every Mutt figure. (Of note, though, is that only the Junkyard that came with the original Mutt has a brown belly. The rest are all solid black.) I think one of the reasons collectors don't like this figure all that much is because his accessories are so lackluster next to the original figure's. While that is certainly true, this guy is still very nice.

Mutts aren't too tough to find. The DEF figures weren't popular and many in the line are tougher to come across. Mutt, though, seems to be about the most plentiful. Since he was a popular character, many old time collectors picked him up while passing on the other DEF figures. You can often pick him up in lots. His pistol and net launcher, though, can be tougher to find. You don't often see complete specimens offered by themselves. Still, you can usually get at least the dog without too much of a search. This guy is certainly a nice addition to your collection. He has many uses. The original figure is better, but this version is worthy of the Mutt character and is an excellent way to incorporate an older character into your newer figures.

Mutt is cool, but I've had to sell of the extras I've picked up. Needless to say, I don't want any more. Headhunters, though, are a different story. If you have some of them available, email me. 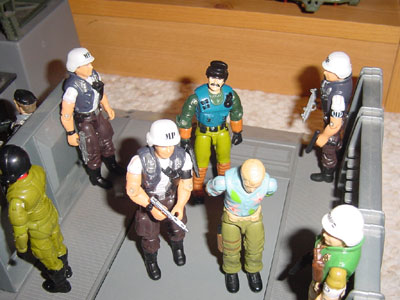 Posted by Robot_Sonic at 8:53 AM
Email ThisBlogThis!Share to TwitterShare to FacebookShare to Pinterest
Labels: 1992, DEF, Mutt