Why, oh why, do I like the Star Brigade figures? I'm sure many of you reading this site have wondered that. I mention them constantly, and have started, finally, showcasing them in the Forgotten Figures realm. Truthfully, I don't know what it is about the line. I've always been a sucker for cool removeable helmets and figures that can be used as pilots, divers, firefighters or science troops. I've been a science fiction fan for quite some time. I integrated my Star Wars and Joe toys at an early age. I also think that my interest in the Star Brigade line exists because it was something I never had as a kid. I always wanted the Defiant, but it came out at a time when I was getting out of toys. When I returned to Joe collecting in the early '90's, the Star Brigade stuff was kind of exotic. The '94 stuff dried up from retail very quickly. The '93 stuff was only available in non-standard outlets. I didn't even know about the series 2 non alien Star Brigade figures until late 1998. As such, the later Star Brigade figs are like some forgotten secret at the end of the line that not everyone is privy to save a select few collectors.

The first Ozone figure I ever had was the grey 1993 Star Brigade version. He didn't look very cool in the package, but he was on sale for $2.00 and, at that time, I was buying any G.I. Joe figure I could find. (I also paid for him and Countdown in quarters and dimes because I was so broke, but that's another story all together.) When I got him home, though, the figure was really cool. He immediately became the pilot of my Razorblade helicopter. He just looked good in it. As such, I started looking for more Ozone's. As time has passed, I'm picked up three of the grey version, one of the 1993 tan version, and the origial 1991 Eco Warriors blue version. The Eco Warriors fig has been the leader of my top cadre of test pilots who are the guinea pigs for all the new aircraft that need to be tested. Now that the 1994 Ozone is in my collection, though, that leadership post will be challenged. While I like all the color schemes this mold came in, this final brown version is my favorite. It is just so distinctive. All of the 1994 Star Brigade figures use subtler colors than their previous counterparts. The result is a nice group of figures that are easy on the eyes and look great as stand alone figures or as part of group. This version is cast in 5 colors. It is amazing that with how lazy Hasbro had become in its Joe creation that the Series 2 Star Brigade figures are so nice. They blend perfectly and don't have the clashing colors that had been a hallmark of the 1993 line.

Ozone is my pilot. Currently, I'm after a Defiant complex, or at least a Crusader shuttle. I fully plan to staff it with Countdowns. However, the first combat mission it flies, Ozones will be at the helm. Countdowns look cooler than Ozones, but the Ozone helmet is much better for Star Warsesque pilot death sequences. Their helmets are easily removed and it allows you to move their heads. As the shuttle explodes, the pilots can lean forward before they burst into flame. It's the little things that make figures like this so much fun. I think the reason why I have latched onto the '94 Star Brigade figs is because I never felt the G.I. Joe line had a supreme pilot figure. The 1992 and 1993 Ace are about the best the line had to offer, but even they are a bit lacking. I wanted a cool figure that had a great flight suit, a cool helmet that wasn't too bulky, and an air mask that looked like what real pilots wear. (Not too demanding, eh?) Since that figure was never made, I had to create my own. In the early to middle '90's, most of my figures were locked away in an attic were I couldn't get them. I only had the figures I was able to find at retail. I did, though, have lots of aircraft. I needed pilots in order to fly those machines. Ozone and Countdown were about the best figures that I had available for that use.

Ozone is unique in that he is the single rarest, non variation Joe that was ever available on a card. He was only shipped in the series 2 Star Brigade cases that came with 24 figures. It should have been 4 of every figure (there were 6 figures in the series) per box. However, the cases shipped with only 2 Countdowns and 2 Ozones. I don't know why Ozone was shipped in smaller quantities, or why others were chosen to have the extra figure in his place. The end result is that this guy is tough to find. I've never, ever seen him offered loose. He is starting to appear carded more often now, but in the past year and a half he was very difficult to find in any manifestation. I got my loose sample by opening a carded figure I bought as part of lot. I paid $5.00 for the carded version.

Needless to say, Ozone is Star Brigade and Star Brigade means cheap. Collectors aren't interested in these guys and don't care about how difficult they are to find. If you have no qualms about opening carded figures, you can build armies of all the Star Brigade figs. Otherwise, finding loose samples is very difficult. I've found, though, the search for these guys to be rewarding. I appreciate some figures that most people could care less about. Since there are few Star Brigade collectors out there, it makes collecting the line that much more fun. It also keeps this part of the Joe line very affordable. Many collectors know little about the line and are impressed by it when they see loose figures in person. I like to think of Star Brigade figures as being my collecting niche. Now that I have that, the time I spend with my collection is more greatly appreciated.

I dig Star Brigade figures. Needless to say, I want them all, and in multiples. If you can help, email me. 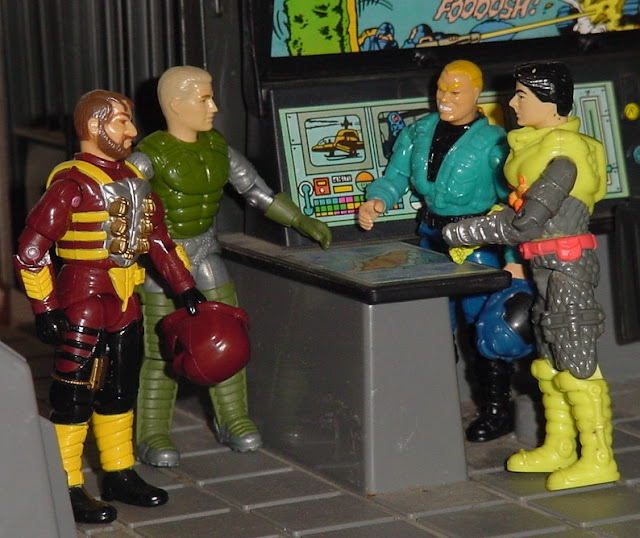 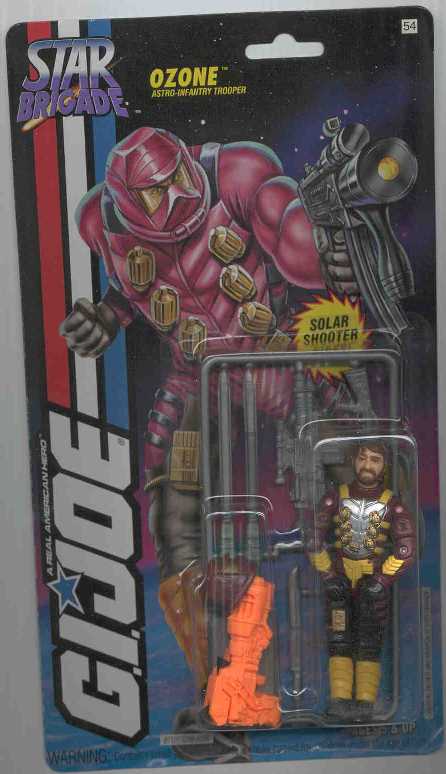