If ever a character has been overused and overdone, it is Snake Eyes. I was sure that I was never going to profile any of his various forms here. However, things do change. I am not, though, going to go into Snake Eyes' character, nijaism, or superhuman capabilities. Nor do I want to discuss his mass popularity in the collecting and second hand action figure community. I simply want to profile this figure for just what it is: an action figure. Quite simply, this is a nice action figure with a great mold and some nice touches that make him a nice part of my collection. I've found this figure to be quite nice of which to own multiples. He has found many uses with me, none of them, though, as the character he is meant to portray. With all the Snake Eyes b.s. out of the way, you can actually find this guy to be a fun figure to own and use.

This guy's mold is very nice. While the other versions of Snake Eyes had elaborate molds, this figure is very simple. He only has some web gear and gauntlets to make stand out. His mask, while not the typical Snake Eyes fare, is also a nice retreat from the earlier versions. I like the goggles, though, and find them to another slight touch that makes this guy so intruiging. His accessories, though, suck. They are all cast in a hideous red. His pack was one of the few attempts Hasbro made at incorporating a pack with a missle launcher. They failed every time. His pack is totally unuseable, just like the rest of his accessories. At least he came with a rope. It is his only saving grace. In 1991, Hasbro put out some amazing accessories. (See Red Star, Crimson Guard Immortal, Desert Scorpion, Big Ben, Dusty, Snow Serpent and Low Light for examples of what they were capable of creating.) They also lost all creative sense and put out some stinkers as well. (See Snake Eyes, Mercer, Grunt, or Tracker [not the raft or mask, though] for examples of very bad accessories.) An interesting side note to this figure is that his mold was reused for one of the Street Fighter 2 figures. I believe it was Night Fighter Guile. At any rate, that figure uses the Snake Eyes mold, but is cast in black. If I can ever come across one of these Guiles, don't think I won't be doing a head swap to make a more color friendly Snake Eyes.

I don't use this guy as Snake Eyes. In fact, only the 1985 version has the honor of being used for who he really is. The '89's are just for accessories. This guy, though, makes up part of my elite swat unit. The figure just screams law enforcement, and I am only too happy to oblige. The color scheme, while not ideal for night operations, does fall within the law enforcement realm. His head and chest remind of swat troops. While the '88 Shockwave is my primary swat troop, this guy is used for special operations where infiltration and stealth are needed. The fact that he comes with a rope automatically makes him all that much more fun than his other versions. It also creates the aura of a swat type figure. Of course, his red gun in abominable. It is as terrible an accessory as they ever released in the line. Giving this guy the '85 Snake Eyes' uzi, or the '84 Mutt's pistol, though, makes him a formidable opponent. Needless to say, this guy does see some use in my collection. He is a specialty figure, though, and is only called upon when the situation is dire. Not being forced to use him as Snake Eyes, though, is a nice way to truely appreciate this figure and all it has to offer. When taken as a pure figure, this guy is very cool and very useable.

Hasbro used this mold for Snake Eyes in 1991. They then dusted it off again in 1995 or so where it was used for the Night Fighter Guile in the Street Fighter Movie line. After that, the mold disappeared for many years. In 2004, Hasbro surprised collectordom when they included it in the Desert Patrol set. This was a great update and created a welcome new mold for ARAH style Snake Eyes figures. But, like most of the molds Hasbro has used in the modern line, this version was quickly over saturated. The head was used in mid '05 in the Winter Operations set and the entire body was reused (with the top half of the figure being identical to the Desert figure) in the awful 2005 HAS set. At this point, the mold has enough good colorings out there for it to be retired. It is still a strong figure and a great look for Snake Eyes, but we don't need any more of them at this point.

All Snake Eyes figures are expensive, at least in relative terms to other figures released in the same year. That being said, this is not a highly sought version of Snake Eyes. His first three versions, with the second being the most popular, are more desirable and pricey. If you don't have any Snake Eyes figures, though, and want to get one without dropping at least a Jackson, this is the version to seek. This version does not appear as often as the other three, but it does not command their price tags either. This is the perfect way to add the most popular character, in an incarnation that is actually playable, to your collection. Most collectors pass this version by. Most have 1 of them for completion's sake, but don't like to hoard them like they do the other versions. I will admit that I have 2 '85's and 4 '89's. That, though, is because I want the '89's uzi and the '85 keeps breaking on me so I like to have a spare. I also, though, have 4 of this version. He is not as difficult to find as some of the other '91's, but will cost more than other Joes from his year just due to the fact that he is Snake Eyes. Fortunately, he does not come close to the price point of the '91 Cobras, so this guy is still affordable. He is a figure that I like and is the only version of Snake Eyes that I use. While this may not be the case for you, you will certainly find this figure an asset to your collection.

What are your opinions about Snake Eyes? Email me. 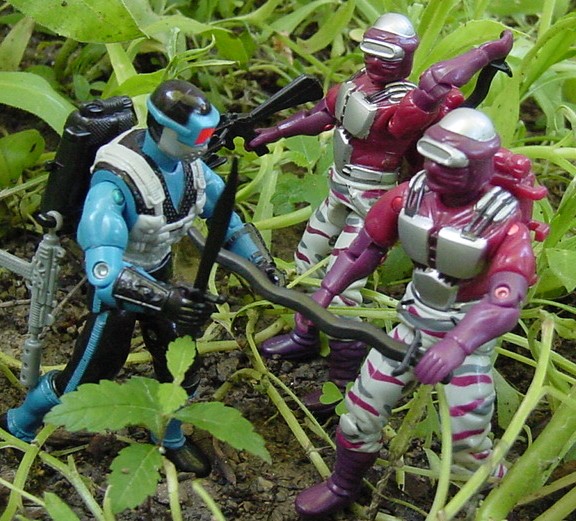 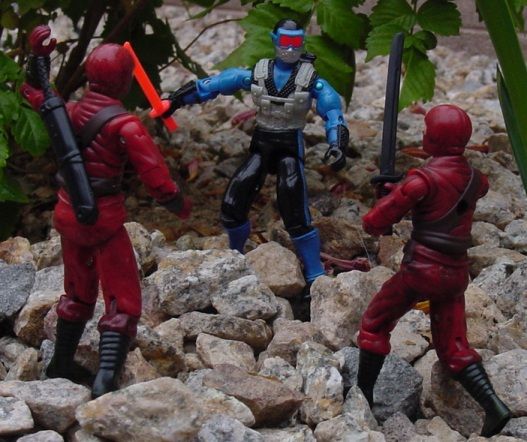 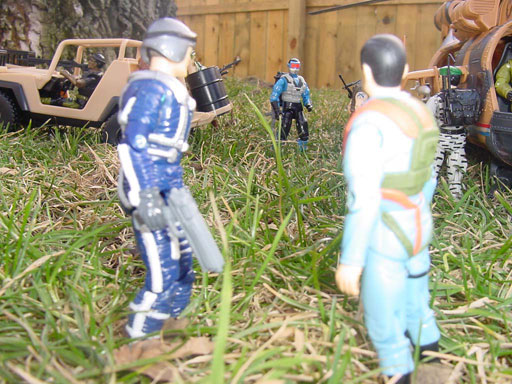 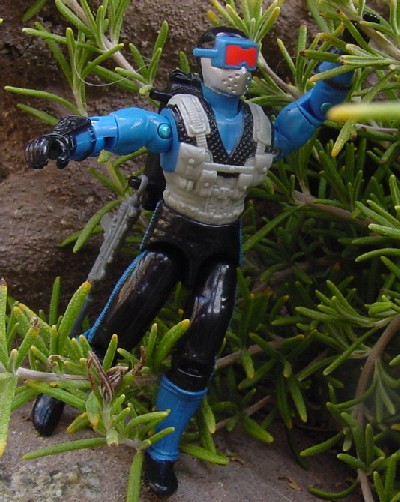 Posted by Robot_Sonic at 1:35 PM
Email ThisBlogThis!Share to TwitterShare to FacebookShare to Pinterest
Labels: 1991, Snake Eyes