I know. I can't believe it either. I'm actually profiling a figure from Cobra-La. What's even worse; I'm about to tell you how this figure is very cool and should be a part of your collection. Truthfully, I feel dirty. I'm going to espouse the single most hated concept in all of Joedom. Cobra-La is held in lower regard than Star Brigade, Ninja Force, Mega Marines, and, dare I say it, Eco Warriors. While those concepts were far fetched, the hidden society of bug people living in the Himalayas was too far off the deep end. Putting Cobra-La aside, though, allows you to enjoy what is actually a very nice figure. While Golobulus and the Nemesis Enforcer don't work for much, the Royal Guard is a versatile figure that can have uses even in the most reality based situations.

When I first got the Cobra-La set, Golobulus and the Nemesis Enforcer went into a junk box from which they only recenltly escaped. The Royal Guard, though, immediately found his way into a heavy play rotation. He is highly reminiscent of the Emporer's Royal Guards from Star Wars. I think that was part of his appeal. I also liked the heavy armour that covers the Guard's body. From the get-go, this guy was a heavy infantry trooper. (Of course, the next year I replaced this guy with the Nullifier, who occupies the heavy infantry trooper moniker to this very day.) Once that phase was over, the Royal Guard found a home as the drone pilots who flew the pods from the Mamba helicopter. The head looks like it could be some sort of futuristic helmet and he fit very nicely in the pod's cockpit. (It also helped that I had two Royal Guards, one for each pod.)

While this kept the Royal Guard busy for many, many years, I've recently began to use them again. These guys do work as underwater troops, but I have enough other figures I've bastardized for that purpose. (See the Toxo Viper for more details.) This guy, though, has become a specialty trooper. I like Crimson Guards watching over my Cobra Commander. This guy, though, has found use guarding other Cobra hierarchy. Scrap Iron and Metal Head both use these guys to keep other, younger, and more ruthless Cobras from taking over their positions. It is in this capacity that I've found the Royal Guard to be very fun to use. I also use them as Cobra prison guards. The Joes have many, many figures that can easily be used as prison guards, but Cobra needs them as well. The heavy armor and covered face looks just like the tough cookie that would have to break heads in a Cobra prison.

There is another reason I chose to profile this figure. The Royal Guard comes with an antenna that I consider one of the five hardest accessories to find for any Joe figure. (Heavy Metal and Lift Ticket's mouthpieces are first, followed closely by Sneek Peek's, the 1984 Firefly's walkie talkie is the other.) This thing is damn near impossible to find. Very few Royal Guards that you find on the second hand market have this tough accessory. Expect to pay for those who do, though. Without the antenna, these guys are still useable. With the antenna, they are just that much better. Like most of the toughest accessories, the lack of the antenna doesn't ruin the figure. I had three of these for years. None of them had the antenna, but they all got use. Now that I've finally got one with the antenna, I really don't use him as much. I have a feeling, though, that these guys will make a reappearance before too long.

Royal Guards are extremely tough to find if you want them complete. They are remarkably easy though, to get without the antenna or gun. It seems that tons of people had the Cobra-La set, but no one wants to admit it. The steady stream of these guys that appears on the second hand market, though, seems to indicate that this figure was used in many people's collections. Incomplete Royal Guards, therefore, don't command a premium. In fact, you can usually pick them up for under three or four dollars. Complete Guards, though, can get quite a bit more expensive. Many collectors who are sticklers about the completeness of their figures count the Royal Guard as one of the few they have incomplete. Still, this guy is Cobra-La and there are many people who simply disregard him for that reason. If you can put the Cobra-La behind this figure, though, he makes an excellent addition to your collection. As more and more people forget about the terrible G.I. Joe movie, figures like the Royal Guard will be judged solely upon themselves as a figure. When taken that way, the Royal Guard is well worth extra attention.

I like this figure, but can't stand the concept behind him. What is your opinion? Let me know. 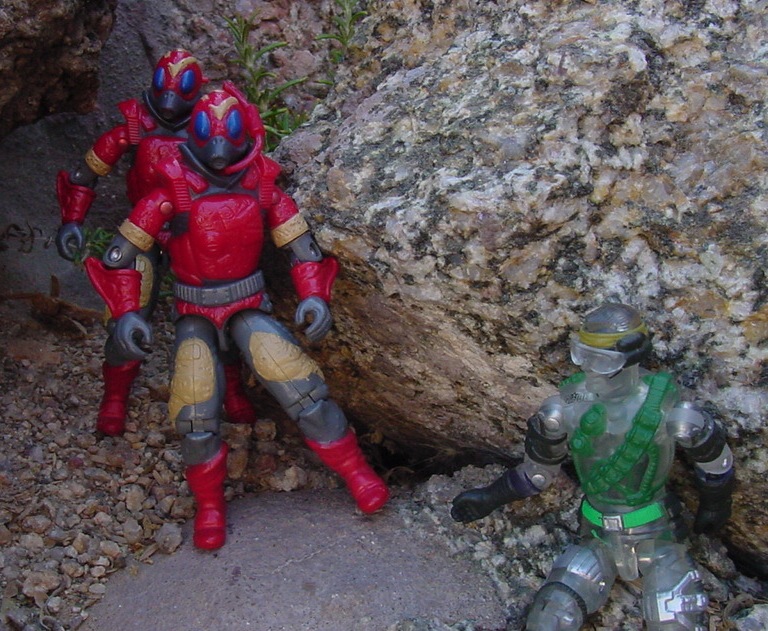