You will notice on the specimen below that I have added an accessory or two. The cloak does not belong to Stormshadow, nor is it even a Joe accessory. It is a Darth Maul cloak from the Sith accessory pack. If you look around, you can still find them for under a dollar a piece at many department stores. They are full of cloth accessories that look very nice on certain Joes. The sword you see below is also not this figure's original. I simply grabbed a red sword, not realizing that this is the wrong one. He actually comes with a thinner sword that fits into a red backpack. Since these accessories are red, though, they really do nothing for me. Giving him a black sword, any black sword, greatly enhances the figure. When I was younger, I gave this guy an inside-out Dr. Mindbender's cape. The look of the black cloth really enhanced the figure and made him much more fun. I had done the same with this guy until I got the Sith cape. I like this look much better. The long flowing cloth more easily disguises additional weapons and makes this guy seem that much more dangerous.

This figure's sculpt is just awesome. 1988 is a fairly banal year for Joes. The crop was okay, but lacked any one distinguishing member. Unlike '85 or '86, where the middle of the road figures are excellent when taken against the line as a whole, 1988's offerings just didn't have any flair. They make for good, basic troops, but see little time in my collection outside of generic army builders. Stormshadow, though, is the class of the year. The grey against white cammo pattern with the mask inset in a hood really creates a cool figure. While this guy's head was emulated through the years (and will be again on the 2000 Stormshadow) it was never improved upon. The white was also a nice homage back to the original figure. Stormshadow's torso has molded ropes that hint at his abilities. (Had he only come with a grappling hook and string!) Of course, though, the crowning achievement of the figure is the tattoo on his arm. It is accurate with the comic and is remarkably visible. It makes the figure really stand out among his contemporaries. Of course, it also makes it harder to use this figure in a Joe realm as anyone other than Stormshadow.

That being said, I don't use this figure as Stormshadow. Instead, he finds use a random assassin, and has even found himself as a member of a S.W.A.T. unit. The figure lends itself to both arctic and urban settings and the details in sculpting allow this guy some versatility. The awesome claw accessory is always with this guy, but I also sometimes give him a sniper rifle, or some sort of smaller machine gun that looks like something an urban commando would use. While Snake Eyes sees little use as Snake Eyes, Stormshadow receives even less. The only Stormshadow I liked was as Cobra Commander's silent body guard. In that setting, he worked great. This figure, though, is too cool to be relegated to my "archives". It's just a figure that you want to use and enjoy. Since he versatile, the figure gives modern collectors many choices for his use. You would think this would be an endearing quality for a figure, but, like most second and third versions of popular characters, this figure lives in the huge shadow (pardon the pun) of the immortal 1984 Stormshadow. It is that figure you will always hear about. A little imagination, though, allows this figure to enjoy the use it deserves.

This mold had a fairly long life. After it's time in the US was done, the figure was sent down to Brazil where it was released in colors similar to the American figure. From there, the mold made its way to India. Funskool then released an exclusive version also based on the American figure for many years. In early 2003, Hasbro re-acquired the mold. Since then, it was used in the Ninja Strike set and a comic pack. The Ninja Strike figure was a terrible pea-green while the comic pack figure was an all too bright red. Frankly, the potential of this mold has yet to be realized in the modern line and we could stand a few more reissues of this mold in more traditional Cobra colors. I think those would be well received. But, as we're in the days of dwindling ARAH-style releases, I would hate to see a coveted slot used by this mold again. Should there ever come a day where ARAH-style figures see more prevalent release, then I would welcome this mold's return.

We all know how expensive 1984 Stormshadows are. The nice thing about this figure is that he's a much more playable version of Stormshadow, at half the price. Of course, that still means he will set you back a little more than almost all of his contemporaries. He is difficult to find complete and his coolest accessory, the claw, is the one most often missing. Still, this guy is pretty attainable and he won't stress your budget like the original Stormshadow will. I've managed to track down 3 of him without ever looking. He is a figure that is readily available in lots, but he also appears often by himself. As more and more dealers move into selling second hand Joes, though, expect to see this figure, and all the versions of Snake Eyes, plucked out of big lots and offered for sale by themselves. Since Stormshadow is about the second most famous Joe name behind Silent Sam Snake Eyes, some people will try to sell him for higher prices. While this guy is worth spending a few dollars on, he is not the cash cow the '84 version has become. Nor will he ever be. The '84 suffers from brittle accessories and yellowing. This guy's claw may be tough, but it doesn't break if you look at it funny like the '84's bow tends to do. With that said, this is still a figure that has found some use in my collection. He is not the Stormshadow of the comics or cartoon, but he is a figure that I enjoy having. Your uses for him may be different, but I think you will agree that the figure itself is a very fun one to own.

Some consider Ninjas the downfall of the line. I think they served their purpose, but got out of hand. How do you feel about the inclusion of Ninjas in the G.I. Joe universe? Let me know. 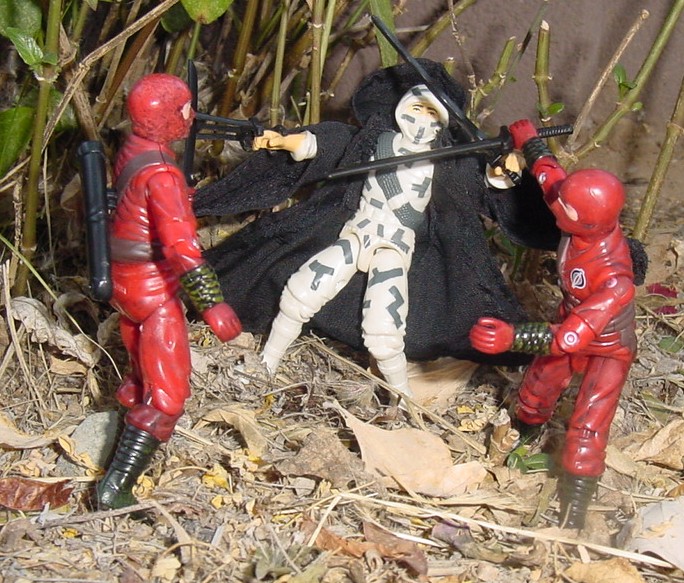 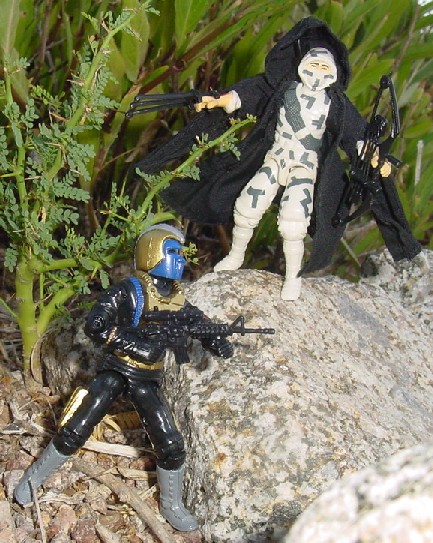 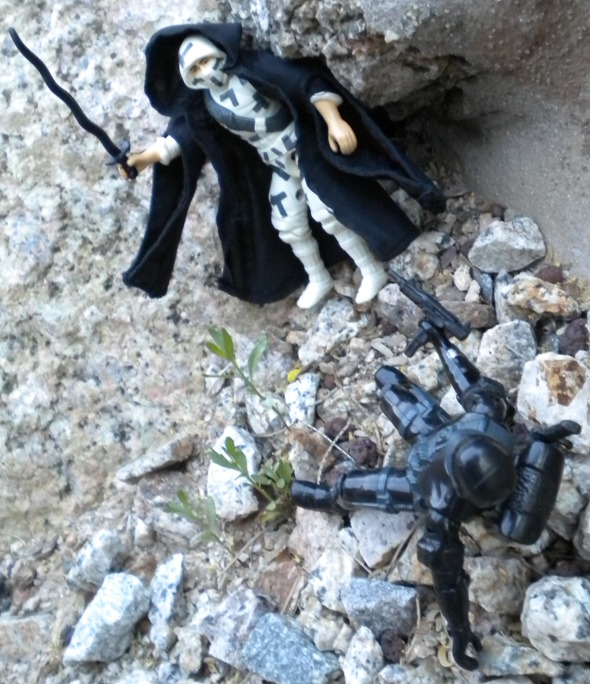 Posted by Robot_Sonic at 3:23 PM
Email ThisBlogThis!Share to TwitterShare to FacebookShare to Pinterest
Labels: 1988, Stormshadow