I find it odd that while I have managed to profile most of the Cobra big wigs, like the Commander, Major Bludd, Firefly and, Scrap Iron, Destro has eluded me. He is, perhaps, the most problematic character in all of Joedom; a villain with honor. The problem with a character like this is that, in time, he must either forego his honor, or give up his villainy. Of course, this is what happened. In the immortal G.I. Joe #57, Destro allowed his honor to help the Joes. His Iron Grenadier invasion fleet during the Cobra civil war also helped the Joes more than it hurt them. Once this had been done, it would be impossible for Destro to return to his true villain roots. Of course, that's what brain wave scanners are for.

This is the most unheralded of Destro's versions. Most people still go for the original 1983 mold. That figure is among the tallest in the line and still stands proud amongst even the latest figures. The 1992 mold, a figure I consider superior to the 1983, gave us the same costume, but updated to match the style of his contemporary figures. The 1997 repaint of the '92 is rather horrid. There do persist, however, rumours of a "pimp daddy" destro from the 1997 line. This figure is supposed to have a leopard skin collar and a color scheme that makes him look like an escapee from a 1970's blaxploitation film. Of course, no pictures of this alleged figure have surfaced and his existence is highly dubious, but he is another fun part of Joe lore. It is the 1988 version of Destro, though, that is, in my opinion, his best. Many hard core collectors don't like the gold mask, but it is this feature that makes the 1988 version so regal. Destro is, at last, a noble figure, befitting his noble status.

My 1988 Destro currently stands amidst 8 Iron Grenadiers. He is on a shelf, separated by a wall from a display of the 1983 Cobra Commander conferring with Major Bludd, Firefly, and an Aero Viper. I like the dicotomy the scene creates. While I have no problem integrating either the '83 or '92 Destro into my Cobra ranks, I've kept the 1988 version separate. He fits with the Iron Grenadiers, not the Cobras. I think it is for that reason that this version of Destro is so forgotten. While the Iron Grenadiers subset is chock full of fantastic figures, {cough}Annihilator{cough}, it is relatively ignored by collectors. For some reason, any figure outside of the Joe vs. Cobra hierarchy is left alone. While Destro was a crossover character, this outfit is representative of the Iron Grenadiers, not Cobra. As I have said before, though, the Iron Grenadiers not being Cobra keeps some spectacular figures from reaching high price points. That is the primary reason I have 9 Iron Grenadiers, 6 Annihilators, 3 Nullifiers, and 4 Undertows. They are great figures that don't cost anything compared to the Cobras that were released in their same year.

As this figure was never available on a regular card and could only be purchased with the Despoiler, this version is rather difficult to find. Finding him mint, and complete, is an even tougher challenge. For whatever reason, his gold plated head tends to flake and spot. Getting a nice, shiny figure is very hard. The nice thing, though, is that this version of Destro isn't highly sought by the collecting community. While it will cost considerably more than the 1992 or 1997 versions, this guy won't set you back what the original 1983 version will. This is a figure, though, that is well worth the cost. I only use mine for display. The 1992 represents Destro in my collection. Even for that purpose, though, he is a nice figure to have. If I can ever come across some of the tough to find Iron Grenadiers vehicles, I think this Destro could see some action. For now, though, he stands in a place of honor on a high shelf. The problematic, philosophical villain surveys the rest of my collection. I find it a fitting place for the character. Whatever you decided to do with him, though, you will find this version of Destro to be vital to your collection.

I really don't need another Destro, but am usually interested in extra Iron Grenadiers figures. If you've got any you might want to part with, email me. 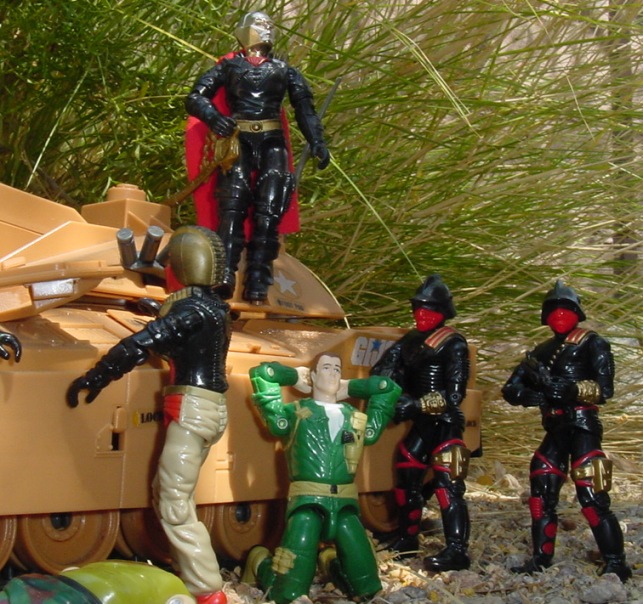