Not since the Eel had Hasbro produced an enemy diver as cool as the Undertow. While this figure is fantastic, it maintains a low profile among modern Joe collectors. Since he is, though, one of the figures that will be re released any day now in the 2000 assortments (They must have lost the Eel molds. What a shame.), I felt compelled to showcase one of the few remaining 1990 enemy figures.

Undertow has many things going against him. 1st: he is, technically, in the Iron Grenadiers subset. 2nd: he doesn't come with any sort of gun. He has a spear thingy, but it's pretty lame. Had he only come with a spear gun like the Eel or the Hydro Viper, I think he would enjoy a little more popularity. 3rd: he followed in the footsteps of the fabulous Eel. Like most figures whose specialties mimicked those of the immortal class of '85's, Undertow is nice, but just can't measure up to the original. 4th: this guy was released in 1990. There were tons of other Cobras available at the same time. Most of them are held in the highest regard. Like the Range Viper, this guy never really had a chance to be the featured Cobras on the shelf. Finally, in 1990, no Joe divers were released. In fact, the only Joe diver on the shelf with this guy is the 1989 Deep Six. Hardly a formidable foe for a figure of this magnitude.

Undertows are a great figure. They have a fantastic mold and great color scheme. He is highly reminiscent of the success Hasbro had with the original Eels and again with the highly sought after Mission to Brazil Wet Suit. I usually give these guys the original Torpedo's spear guns. It looks very nice with them and allows for some difference in the weaponry of different ranks of divers. I really like the molded air tanks and detail of the figure's wetsuit. This guy just looks like he would cause his targets all sorts of trouble. Their only drawback is the hose that attaches the mask to the figure. It is a bit large and obtrusive. Something more along the lines of what they did with the 1994 Shipwreck would have been much nicer. Couple that with his lack of weapons, though, and this figure will, most likely, always languish in obscurity.

I think the reason we are seeing a 2000 Undertow is because the Eel molds are lost and collectors tend to be rather aloof when it comes to the very nice Hydro Viper or Eels Version 2. He is, though, an excellent choice. Should he come with new weapons that more mimic the Eels, I think this guy could be the class of the 2000 Joes. He has all the makings of a winner. It is both good and bad that he will be packaged with the new Firefly. Good because I like the Firefly and won't mind have about half a dozen of this set. Bad because everyone else feels the same way and these guys will be tougher to find in the numbers I want. Hopefully, though, Hasbro will produce more than enough of these, like they did the 1998 releases, and we all will be able to fill our army building needs.

Undertows aren't too tough to find. You can usually get complete ones for under $8. The mask, flippers, and spear, though, can be a hard to track down combination. Most of the Undertows you pick up in lots will be missing at least one of these accessories. While the figure is good, he needs at least the mask to really be useable. Unlike most of the 1990 figures, though, this guy isn't scarce and regularly appears for sale. He is an excellent companion to, or supplement for the oft mentioned Eel. I've picked up three of these guys and wanted more. After I see how much I like the new 2000 version, I'll let you know if I'm still going to be after additional Undertows. In any capacity, though, he is another lost 1990 figure that has gotten lots of use in my collection.

After I judge the 2000 Undertow, I'll let you know if I want more. Until then, who's your favorite enemy diver? Let me know. 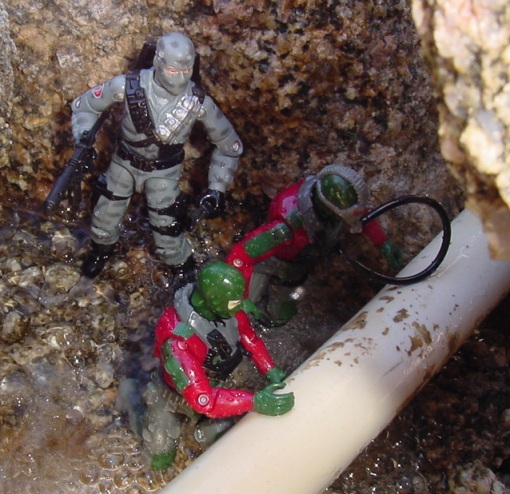 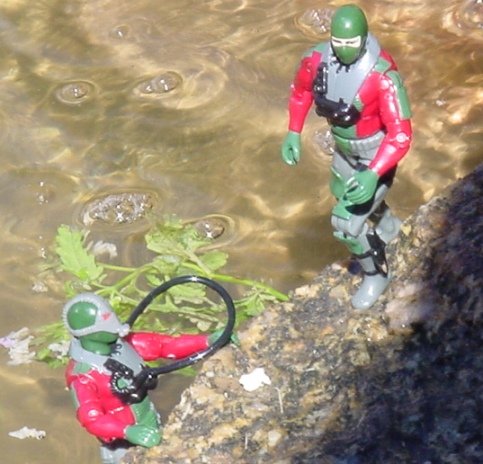 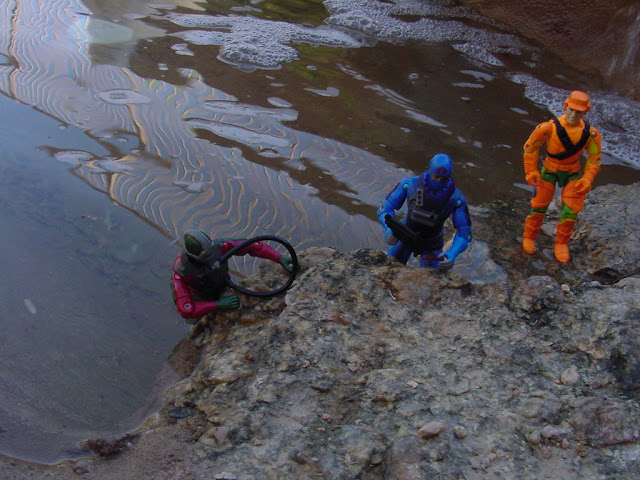