In 1995 and 1996, I spent a lot of time trying to track down the last vestiges of Joes at retail. Through 1995, my local Toys R Us stores still got new shipments of 1993 and occassional 1994 figures. As the year went on, though, those became more and more scarce. As the better figures dried up, I started to look at what was left on the shelves and determined whether buying the figures was a good use of my time or not. For many months, my local Toys R Us had a couple of Mega Marines Gung Ho and Clutch figures hanging on the shelf. I passed them by for months and months, not letting even the black weapons twist me into buying the figures. Eventually, though, desperation kicked in and I succumbed to buying even the most hideously neon figures available. So, I went to Toys R Us to pick up the Mega Marine Gung Ho and found that the figures had finally sold out.

The Mega Marines are kind of a neat idea...if taken within the context of 1993. Cobra has some science fiction inspired monsters and augmented soldiers that require special skills and gear to combat. If you take the science fiction out the concept and just leave the Mega Marines as a highly technological, extremely well training fighting force, though, you have a pretty solid basis for a sub team. Really, they could have been a modernized Battleforce 2000 without the gimmicks. Unfortunately, the subset was bogged down in neon colors, outlandish villains and play-doh armor that was supposed to add play value.

The Mega Marines first entered my collection in early 1999. I acquired a huge lot of '90's figures and it included Gung Ho, Clutch, Mega Viper and a Cyber Viper. The figures were well done and rather interesting. But, their colors didn't lend themselves to great use. The figures were quietly packed away and didn't appear for a long time. I lost interest in the sub set and never really went out of my way to complete it. A few years later, the constant Mirage repaints coupled with my increased interest in the Cyber Viper finally brought me around to completing the line. I acquired a Mirage and Blast Off...and quickly packed them away, too. The figures were good enough, but had issues with colors that would forever doom to the pile of what could have been.

Blast Off's accessories are neither great nor terrible. His weapon tree features a solid cast of useful weapons. But, they are all colored dark blue. In 1993 terms, this is pretty good. They could have been pink, orange or yellow. But, Clutch and Gung Ho had black weapons, Mirage had olive and the Cyber Viper included grey accessories. So, of the members of the subset, Blast Off's blue only beats out the neon yellow from the Mega Viper. The figure includes the requisite body armor and play-doh that were the gimmick for the line. Finding play-doh that hasn't dried out at this point in time is basically impossible. But, it wasn't much of a collector oriented feature, anyways. Blast Off's helmet could be better. As a mold, it is very solid. (See Dragonsky for further proof!) But, the neon orange color and lack of paint details really takes it down a notch. The other issue is that the helmet is tight. So, any Blast Off figure that had the helmet removed and put back on more than a few times suffers from severe paint wear on the figure's nose and eyebrows. At least the late release date makes finding mint versions easier than if this were, say, a 1985 release.

The Blast Off mold was used just the one time in the vintage line. During the repaint era, one Cobra and all the Joe Mega Marine molds were found. Mirage was used ad naseum, but the bodies of Clutch and Gung Ho only appeared in a convention set. And, this is the only other time the Blast Off mold appeared, too. The head and helmet were used in the incredibly well done 2005 Dragonsky figure. It was a great reuse of the parts and created a figure for the ages. It would have been cool to see a full redo of the 6 standard construction Mega Marines figures in a repaint set. But, that was not to be. So, Blast Off remains a sad reminder of the neon era of Joes, even though the sculpt could easily be saved with a solid repaint.

Blast Off figures aren't easy to find. All of the Mega Marines seemed to have been produced in lower numbers and Blast Off is among the least common of them all. Mint and complete with filecard versions of the figure sell in the $10 - $12 range, but carded versions can be had for $18 - $20. It's a lot for a figure like this, but is also in line with the figure's general scarcity and late release date. Had I not found this figure when I did, it's doubtful he would be part of my collection. It's a figure with potential and works in the context of the Mega Marines. But, Blast Off will never be a vital part of any collection. 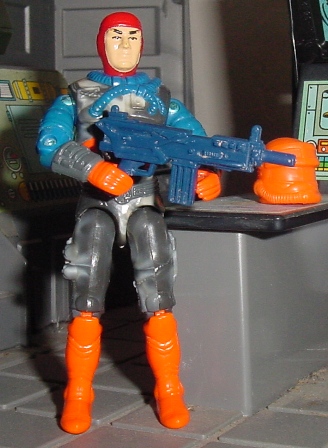 Posted by Robot_Sonic at 4:24 PM
Email ThisBlogThis!Share to TwitterShare to FacebookShare to Pinterest
Labels: 1993, Blast Off, Mega Marines