I did not buy any Joe figures in 1989. In fact, I only bought one figure in 1990. (Though, it was the 1989 Night Viper.) As I left Joe behind, my younger brothers did, too. So, despite the fact they were 3 and 4 years younger than me, the line of Joe toys into our house pretty much ended when I stopped playing with the toys. In the early 1990's, though, many of our neighbors who were younger still played with Joe toys. It wasn't the primary toy line like it had been for my contemporaries. But, it was often a large part of their toy collections. From this, I cam to know a few of the 1989 through 1991 figures. It was in one such encounter that I first found the rifle from the 1989 Stalker figure. To me, it was amazing: something far better than many of the weapons my childhood Joes had included. It was compact, sleek, well designed with all the bells and whistles good accessories required. In short, it was almost enough to get me to seek out a Stalker figure at retail...almost.

While I was never able to actually acquire the figure during his retail run, the Arctic Stalker joined the short list of figures who I wanted to quickly acquire when I returned to Joe collecting in the late '90's. Along with stalwarts like Big Ben, Rock and Roll and Metal-Head, Stalker was a figure who I felt I needed to get quickly since it was such a well done figure and since he had some tie to my younger years. Though a concerted buying effort of large figure lots, I was able to acquire several of the figures. But, due to the nature of his accessories, it took those several figures to complete a single Stalker.

Once I had the figure, though, I didn't find him as useful as I once had thought I would. By the time I first acquired this figure, I had a 1994 Stalker in my collection. The later version had most of what I wanted from the character with better coloring, black accessories and the cool stocking hat. As such, the Arctic Stalker was relegated to display only duties. In the few times I was able to take pictures in the snow, Stalker did appear. But, without actual winter conditions, the figure found itself buried at the bottom of the 1989 figure drawer. I still appreciate the figure for what it is. I just don't see much occasion to display or photograph it since there are some better Stalker figures already out there.

Stalker's sculpt is top notch. There are a lot of amazingly sculpted figures in the 1989-1991 release years and this character is no exception. The mold features the bulk of late '80's figures while still being sleek enough to pass with those from the line's earliest years. You can almost see the knits in Stalker's stocking cap. The face sculpt resembles Stalker from the earlier years, but has some aging you would expect of the character. The face is a bit flat, though, to accommodate the face mask. The figure has a open jacket with a vest beneath it. The jacket has a few sculpted details. These are unfortunately colored in red and yellow. But, it's not enough of either color to spoil the overall look. Stalker's gloves are finely textured in a criss-cross pattern that bring some depth to his arms. His lower body is fairly non-descript with some small splatterings of cammo pattern paint. In this case, the simplicity of the mold works well. You know that this is a soldier of some ability, but he can still maintain his cool.

The figure, though, starts to fall apart in the color scheme. A white and green motif makes him neither a forest trooper nor a true Arctic Trooper. In certain environments, though, the combo would be useful. But, adding the green also helps to bring some diversity to the Joe Arctic troopers. Prior cold weather troopers basically used all white as their base color with a few splashes here and there for some contrast. Stalker brings something different to the genre while still having some uniformity with the existing specialists. This allows the figure to be used in more settings and expands the figure's role beyond the one weather type. That type of diversity is appreciated.

Stalker's accessories are incredible. Aside from the already mentioned rifle, the figure included a small backpack, a face mask and knife. This contingent alone would have been decent for the figure. But, Hasbro went one further and included a full kayak into which Stalker could fit. This included a front mounted machine gun, stabilizer rig and oar. As a bonus, Stalker's backpack would connect to the stabilizer arm to create a small outrigger for the kayak to help keep it afloat. It was an accessory that could have almost been sold by itself. To see something so large and detailed sold with a standard carded figure was outside the norm. It also helps give this figure great character.

This Stalker mold was used in 1989 and then for a mail away exclusive in 1993. After that, the mold went quiet for a long time. Then, in 2004, the head appeared on the excellent Desert Strike Stalker figure. If that wasn't enough, the entire body returned a few months later in 2005 as part of the Winter Operations set. Sadly, this figure wasn't in the best colors. Much of the mold was then used in 2007 for the Convention Exclusive Rock and Roll figure. So, the mold still has some life in it and could be used to create some interesting amalgamations or newly colored Stalker figures.

This figure is not terribly difficult to track down. The white plastic base is prone to discoloration,but not to the extent seen on many other figures. As the figure includes a wide array of small accessories, it can take some time to track down a complete version. Mint and complete with filecard figures tend to sell in the $12 - $15 range. For a non-army builder from 1989, that's a fairly high price. But, when you consider that it's Stalker, he's got a lot of gear and the white plastic tends to fade, the higher price point becomes more understandable. Even as a niche figure, this version of Stalker has value. The coloring allows him to be used a few different environments and it's always nice to have a weather specific version of major characters. 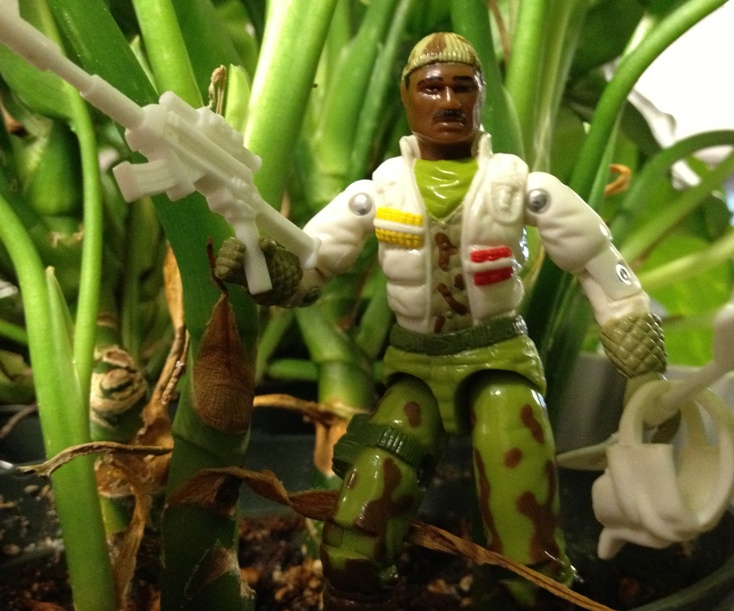 Posted by Robot_Sonic at 10:28 AM
Email ThisBlogThis!Share to TwitterShare to FacebookShare to Pinterest
Labels: 1989, Stalker