I am not a fan of Cobra La.  I never have been.  Even as a kid in 1987, I couldn't figure out why something like Cobra La was introduced into the Joe world.  For some reason, even as a adult, I am more forgiving of aliens, robots and genetic mutations than I am of Cobra La.  I think this comes from the fact that the characters were so odd for the time.  In 1994, including the Lunartix was an extension of the Armor Tech and astronauts that had come before.  Cobra La had no such soft introduction.  Suddently, Joe went from reality based military themed toy to full scale fantasy.

As a kid, I did not own Cobra La.  I purchased Slaughter's Renegades while my younger brother picked up Cobra La.  (This was by design as I knew Cobra La sucked and I wanted Mercer in my possession.)  Once we had thee figures in house, though, I felt obligated to try to use them in some capacity. The Royal Guard slowly found a role as a Cobra diver, pilot, flying trooper or heavy armor soldier. He was never the primary focus of any battle, but he did get some use. Golobulus was simply useless. The tail did not translate to a toy and was of no use. Even his weapon was terrible. Nemesis Enforcer fell somewhere in the middle. The figure was human enough to pass for a random bad guy. But, I had no real character in mind for him.

Mostly, the Nemesis Enforcer became a faceless villain whose main goal was to be killed by Joe or Cobra forces. He might have been the albino leader of a group of dissatisfied students, a disfigured solider bent on revenge or just some random guy who happened to get a gun a tried to rob a bank. Regardless, the figure's main goal was die without me having to sacrifice one of my good figures for the role. The result was that my childhood Nemesis Enforcer survived in remarkably good condition compared to many of his contemporaries. As an adult collector, Cobra La has no home in my collection. I have purged all but the Royal Guard and he remains only due to an oversight. I don't have a connection to the characters or figures in any way. So, there is no reason for them to take up a space in my collection any more.

The Nemesis Enforcer mold was only used this one time in the U.S.  Hasbro realized their folly on Cobra La and buried the molds...never to be seen again.  Really, this is too bad.  Funskool might have done something very interesting with this guy.  Really, collectors would have likely enjoyed a Cobra La repaint set during the repaint era.  The molds aren't terrible and Nemesis Enforcer could easily be converted to a more conventional Cobra villain. The character was revisted in the Anniversary line in a more movie accurate design. So, fans of the character do have at least one other option available.

Nemesis Enforcer figures can be pricey.  At times, they will exceed $20 for a mint, complete with filecard figure.  But, other times, you can get them cheaper.  Some collectors love this figure and consider the cartoon characters to be more important than anyone heavily utilized in the comic.  As such, this figure has its following.  Other collectors, though, couldn't care less about Cobra La and don't spend much time seeking them out.  As a mold, the Nemesis Enforcer has great potential.  Saddled with the baggage of the G.I. Joe Movie, though, the character is tough to get behind.  Still, the figure is a reminder of what the Joe line was in 1987 and was a harbringer of things to come as the line progressed. In that regard, the figure has some value. But, to me, this guy will always be an aberration. 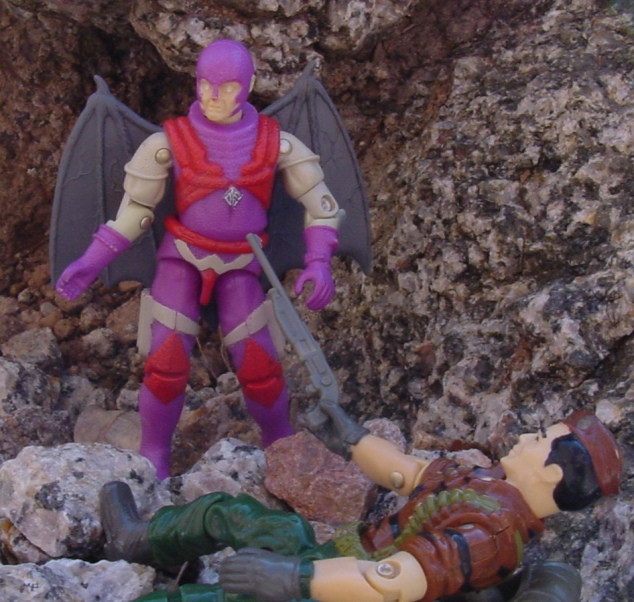