In 2004, Hasbro hit the collector mother lode when it released the Cobra Infantry Set.  This mix of 4 Cobra Troopers and 2 Cobra Officers (Called Squad Leaders) made from mostly original molds in classic Cobra colors sold like hotcakes.  Collectors tripped over themselves to build massive retail armies and the sets quickly doubled in price on the secondary market.  In the 18 months that followed the release of the Cobra Infantry Set, though, Hasbro never again captured lightning in a bottle the way they had with the original 6 Pack.  Collectors clamored for more flavors of Cobra Troopers and Officers.  But, Hasbro never came through.  Finally, in the summer of 2005, collectors saw the only other time Hasbro would package the Trooper and Officer molds together in an army building set when they released the Cobra Night Watch.  This set featured the return of the original head molds for the Trooper and Officer in a base grayish-blue coloring.  The officers, though, got a more standard treatment.  But, the result is a figure that is remarkably well done.

I've never been as much of a fan of the Cobra Officer as I have of the Trooper. I don't really know why, but I have always considered the Officer to be the lesser of the two figures. As a kid, the Officer was the first of the Cobra army builders to enter my collection. Despite the excellent AK-47, there was not much about the figure that really intrigued me. The named Cobras of the era were the villains who captured my attention. And, having them superseded the need for faceless troopers. In time, though, this changed. Army builders became more important to my Joe world. Hordes of masked troopers helped to set the Joes up as a super-hero like organization since they could overcome such great odds against them.

The Night Watch set didn't have much of an identity.  The figures weren't really night combat colored.  They didn't match Stinger Drivers.  And, they didn't fit any of the other, existing Cobra color palettes.  This doesn't mean that they didn't stand on their own as valued releases.  But, they were more difficult to integrate into existing Cobra armies.  The Night theme was at least something new that Hasbro tried that didn't come off as completely cheesy and cliched. But, it would have been nice for these figures to have been integratable with Night Vipers (it would have been even nicer had Hasbro included a Night Viper or two instead of the 2nd Officer and a Trooper!) But, the colors are subdued, close enough to vintage to be acceptable and can work as a reasonable Cobra strike force.

Since these figures were plentiful and cheap, I acquired a good lot of them. At the time, I heavily favored figures based on molds from 1985 and prior. And, since the Night Watch fit the bill, I acquired a large number of sets. Once I owned, them, though, I found that the Cobra Troopers really didn't do much for me. When picking out a cadre of villains to use for a photo, I would gravitate to the 2004 Infantry Troopers before I would look at the Night Watch figures. However, it is this version of the Cobra Officer that I find is my favorite. The dark blue background with the solid painted details and red trimmings make for a figure that leaps off the vintage comic pages. The silver logo and helmet sigil hearken back to the vintage Cobra Officer and give this figure a feel that is more like the vintage line than most of the repaints of molds from that era were able to accomplish.

The set included two Cobra Officers, one adorned with purple trimmings and this figure, with the classic red mask. The purple figure is visually interesting. But, this vintage inspired, red masked figure is the one that really stands out. One of the great shortcomings on the vintage line was that the original Troopers and Officers were never released in more colors. They should have seen repaints with the comic book based red mask. Fortunately, the repaint era did remedy some of this. Both the 2004 Infantry set and this 2005 release prominently featured red masked officers to help augment the Cobra armies.

As a mold, this figure is something relatively new.  At the 2003 convention, Hasbro said that the Cobra Trooper and Officer molds were gone.  But, to create the 2004 Infantry set, they retooled them from the ground up.  At some point after this proclamation, though, Hasbro found at least part of the vintage molds.  So, the 2004 Comic Pack Trooper and Officer as well as these Night Watch figures feature the vintage head, chest and legs of the Cobra Officer.  The arms and waist, though, are from the 1984 Roadblock figure.  The result is fine, though, the skinny arms are not nearly as nice of a replacement for the original arms as the Thunder arms from the 2004 Infantry set were.

The Night Watch accessories were OK. The certainly beat those included with the 2004 Infantry set. But, that was a pretty low bar to overcome. Each of the Troopers included a well done combat knife and a new sculpt assault rifle. It's not the best sculpting of the new sculpt era, but also not the worst. It fits the figures and is acceptable. The purple Officer includes two more rifles that are also from the era. This figure includes 4 sub machine guns. (2 occurrences of 2 different weapons.) The weapon you see pictured below is one and, frankly, kind of sucks. I have never liked the look. The other two, though, are very nice and look like the weapons that Cobra Troopers and Officers used in many of the late '80's issues of the Marvel comic. Since there's really no need for one figure to have both weapons, it's easy to hand the extra gun off the other Officer and both figures are then well outfitted. It would have been nice to see some vintage accessories and backpacks for these figures. Maybe even some additional gear to accentuate the fact that these troops were supposed to be more elite would have helped. But, for the time, at least the weapons made sense and were mostly firearms. That, alone, was a victory for the set.

The Direct to Consumer line from 2005 through 2006 was actually a surprisingly good mix of collector friendly figures and vehicles.  The ARAH style releases finally escaped the numeric sequential comic releases and expanded into some new territory using vastly different molds.  The new sculpt figures were progressing and featured many of the highest quality figures in that style.  There were army builders, classic characters and some decent new characters all sprinkled into the releases.  But, the line was still doomed from the beginning.  Not even Hasbro dumping all their overstock to Toys R Us for huge discounts was enough to save the line from cancellation.  There just weren't enough Joe collectors alone to keep a toy line afloat as an online only offering.  Without the residual retail sales, Joe didn't have the interest to sustain itself.  But, even the appearance of the DTC items at Toys R Us stores was too late. Most of the releases languished at retail for years. Better items, like the Night Watch, did sell out. But, Hasbro was forced to rethink what they wanted the Joe line to be.

The Night Watch sold well upon its initial release.  At the time, Cobra themed TRU 6 figure sets were seeing production runs in the 20,000 units range.  It is likely that the Night Watch saw production numbers this high as well.  Every online dealer of the time stocked the Night Watch set and most sold through their initial shipments very quickly.  But, collector demand was sated just as swiftly as the sales.  The move to the DTC model alienated a large portion of the Joe fanbase.  And, collector interest in the DTC releases was at an all time low.  This lead to Hasbro selling off their remaining DTC stock to Toys R Us stores.  TRU then sold the items in their brick and mortar stores across the US.  A full year after the Night Watch set's release, it was possible to still find them for original retail price at TRU stores around the country.  The result is a cheap figure to acquire today.  Mint and complete Night Watch officers sell for around $4 each.  Boxed sets seem to run in the $30 range.  So, the sum of the figures is much less than getting all at once.  For $4, this figure is worth picking up, especially if you can get a nice cadre of the Night Watch Troopers.  But, at it's core, this figure is still inferior to the original Cobra Officer.  He's just a lot cheaper. 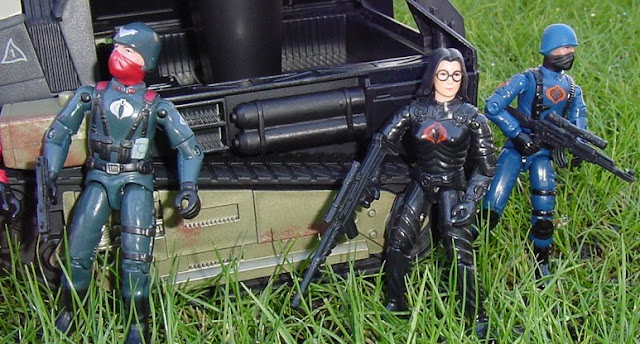 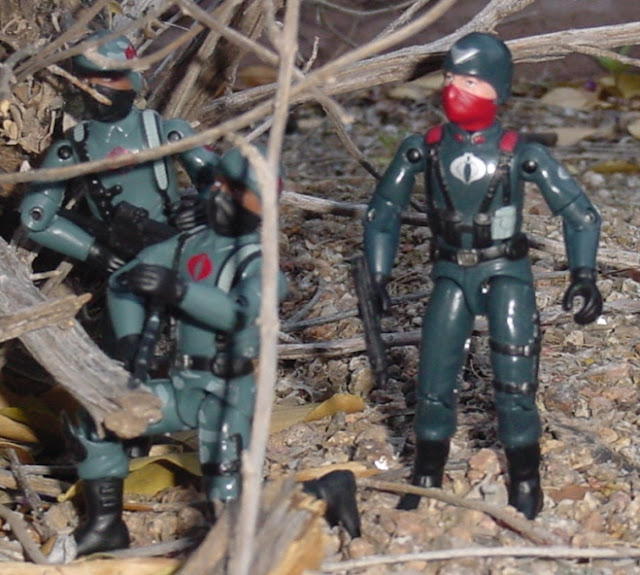