Estrela produced over 100 unique figures for the Brazilian toy market. Some of them are very similar to the American versions of a character. Others were unique amalgamations of various molds that were brought together into Brazilian exclusive characters. The third group was exclusive repaints of classic molds in drastically different colors. This group includes figures like the named Python Patrol characters and Urzor. It also includes, though, some exclusive members of the Tiger Force subset. Along with slight repaints of Duke, Lifeline and Dusty, Estrela also produced exclusive Tiger Force versions of Shipwreck (named Marujo) and the subject of this profile: the Tiger Force Airtight or Ar Puro figure.

The main difference between Ar Puro and Airtight is the color of the figure's trimmings. Sadly, the base yellow undercoat for Airtight's uniform was kept intact. In lieu of green accents, though, Ar Puro features a brown helmet, vest, gloves and boots with a few tiger stripes painted onto his legs for good measure. The result is a figure that is duller and more subtle than Airtight, but still strong in appearance. The brown is generally more muted and makes this figure seem more combat ready than his green, American or Indian brothers in mold.

But, Airtight is still somewhat difficult to use. I've found his best days are inside of vehicles or the HQ. In the field, the figure is somewhat out of his element. (Unless he's fighting Toxo Vipers....) As a crew member on a vehicle, though, Airtight's uniform works well. (I've always thought his overall look was reminiscent of Rebel Pilots from Star Wars.) So, you will see him in aircraft, gunner stations or computer terminals in various parts of my collection. In that capacity the figure works much better than as part of a patrol or combat unit.

As a kid, Airtight was one of my favorite figures. He was the first 1985 figure I acquired at retail (along with Footloose) and remained relevant to my collection for a long time. Seeing a new version of a figure I liked so much was a great discovery when I first learned of the Brazilian exclusives. While there are iconic versions of the classic 1985 and earlier Joes, I also like having options for them in terms of uniform design. So, while I'm not a fan of Tiger Force, per se, having Airtight in a color scheme slightly different from his iconic version is a nice way to diversify the character and allow to appear in more settings without getting stale. Ar Puro isn't as far removed in look from the classic Airtight as I would have ideally liked, but he is enough of a diversion that he brings some new life the character.

Ar Puro includes all the standard Airtight accessories.  The sniffer and hoses are black like the American versions.  But, Ar Puro's backpack is black as well.  This unique accessory is the most difficult piece to find for Ar Puro since the pegs tend to break and you can replace his other gear with American weapons without too much loss of use for the figure. While it is difficult to tell the differences between the Estrela and Hasbro sniffer, the Estrela accessories are made of different materials.  So, be sure to verify those if you purchase an Ar Puro figure.

The Airtight mold has been around.  After his release in the U.S., this Ar Puro figure was created in Brazil.  From there, the mold went to India.  Funskool started releasing Airtight at some point in the mid 1990's and continued to produce him off and on through 2004.  At this point, the mold could still be in India.  It could be in Hasbro's control.  Or, it might have been destroyed.  Whichever of those fates has befallen it, we have seen the end of Airtight figures.  It was not enough for my tastes as I think the mold could have made an excellent addition to the Anti-Venom or a new Eco Warriors set.  But, at least Ar Puro gives collectors a slightly more combat colored Airtight figure and another take on the Airtight character.

Ar Puro figures are hard to find.  The brittle thumbs and Brazilian release have combined to make a mint, complete with filecard figure a $100 purchase. That's a lot for a figure with limited use whose colors don't really match the Tiger Force team from the US or Europe. But, this is a figure that has a uniqueness to him that helps to justify such an expenditure. He is certainly hard to find and does stand out in any collection. That may not be enough to justify the price tag, but it is something that gives the figure value beyond the yellow and brown colors. 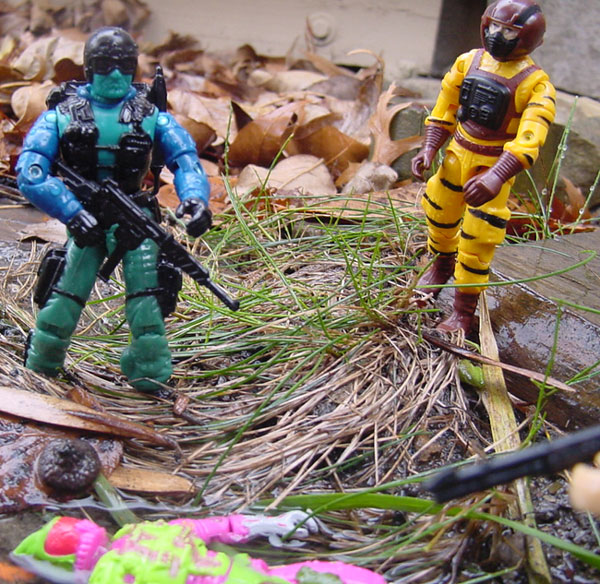 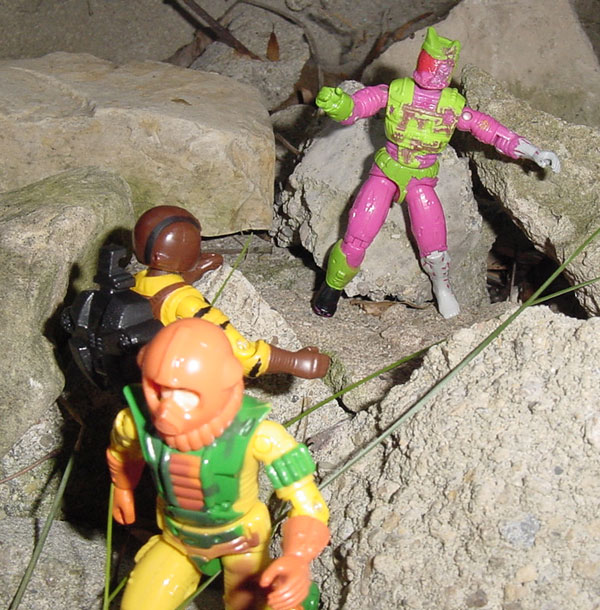