The 1998 Oktober Guard 3 figure pack was not well received by collectors of the time. As a Toys R Us exclusive, the set lingered on the shelves for years. While collectors had long clamored for the Oktober Guard to be released in the Joe line, the actual execution of the figures left much to be desired. It was not that the three molds in the pack were bad. They just were neither the characters nor the renditions that collectors really wanted to see. The dream was to see Daina, Horrorshow and a Brekhov that wasn't just a Red Star repaint. The reality was Volga, Lt. Gorky and the Red Star repaint we had hoped to avoid. That, coupled with the fact that the Cobra Infantry Team and the Cobra Polar Assault were excellent figure packs, caused the Oktober Guard set to be judged relatively unfairly at the time of its release. In retrospect, the set certainly has highlights and this Lt. Gorky is one of them.

To say this figure is tremendous is an understatement. Unfortunately, much of Hasbro's greatest work in the repaint era went into figures and characters that are not collector favorites. The upside, though, is that gems like Gorky can be discovered and re-appreciated later. The figure uses a light grey base to provide the primary color. There are few figures in the entire line who use this color, so it is very distinctive. If you look closely, though, there are additional hues of darker grey that are used to accentuate the details on the mold. Gorky's straps and boots use these colors to bring depth. Then, the figure rounds out the ensemble with flashes of black, silver and red to showcase the intricacies of the mold. Gorky even features a pasty skin tone that both coincides with his red hair, but also the fact that he is likely stationed in a place that is cold and doesn't get much sun.

When I first acquired this figure in December of 1998, my first notion was to make him a Russian army builder. The excellent gear and general obscurity of the character were a good fit for a non-descript character who could die off rather easily. However, I simply never got around to buying more Oktober Guard packs at retail. Usually, I would talk myself out of them, or buy up another Diver, Infantry or Polar pack instead. Before too long, I focused my army building efforts on the 1992 Big Bear figure since I often acquired him in lots of '91 and '92 figures that were my main source of purchases at the time. So, Gorky became a de facto officer for the "greenshirts" that were the Big Bear figures. This idea, though, died off quickly. Between Joe army builders, Cobra army builders and Iron Grenadiers, I had enough to chase down without trying to create another faction, especially when you considered that, at the time, the main Oktober Guard characters were non-existent.

That lead the figure to a life of obscurity. So much so, that this figure is, basically, buried in the bottom of a plastic tub out in the garage. But, the fact that the 1998 figures are a small subset and that this figure is very well done, have helped this figure find some life. From time to time, as I change out the figures who are displayed in a case, this figure will get selected for a short time in the spotlight. Usually, I tire of him rather quickly. But, the colors are distinct enough that the figure also provides a nice contrast in many of the photos I use for the site. It was in this capacity that I found the figure and determined him to be a good profile candidate. You will see him lurking in the background of a few other profiles. This gives him exposure over many other figures in my collection and is, likely, a good fate for the figure.

Gorky uses the entire body of the 1992 Big Bear figure. The huge color difference between the green 1992 Big Bear, the dark brown 1993 mail away Big Bear and the greys of this Gorky, though, allow for him to be used as a different figure. (Though, Big Bear is obscure enough that you could use this figure as a replacement for that characters as well and no one would really recognize the difference.) The mold was never re-used after this figure appeared. (Though a complete redesign of the character was released in 2006.) It's unfortunate as the figure's arms, legs and chest could be used for a host of amalgamated figures (His head and waist have a Russian star on them and would be harder to use, though details like that didn't seem to phase Hasbro during the 2000's.) and would have been a slight respite from the Big Ben/Red Star parts that were so popular. But, collectors are left with three distinct, and all strong colorings of this mold and that is more than can be said for many other releases from this time period.

One of the great strengths of the 1997 and 1998 repaint sets was the accessories. Most of the figures released during this time either included most of all of their original gear, or accessories that were good enough replacements that the missing originals was forgivable. Gorky is no exception. While his gear is not overly abundant, it is relevant to the figure. Included with the character are a well sculpted rifle with strap. The gun is small, compact and greatly detailed. The figure also included a backpack that was sized just about right and was detailed enough to give the impression that Gorky could be out in the field for a great deal of time. The pack was later used to death by Hasbro during the 2000's and even the rifle made a few appearances outside of this mold. That was somewhat nice since it allowed those collecting at the time to acquire some decent, extraneous accessories. But, the pack and, especially, the rifle always seemed very tied to the Big Bear/Gorky mold to me. So, despite having some extras, I've found I don't use them since they look out of place with any mold other than this one.

Lt. Gorky figures are not that popular. The Oktober Guard 3 pack was a remarkable pegwarmer that was available at retail well into 2001. On top of that, Gorky is a later edition to the Oktober Guard pantheon and is not considered, by many collectors, to be an integral part of the team. So, the result is that Gorky figures remain cheap. $4 to $6 is all a mint, complete with filecard version will run you. The issue is finding one. The figure is obscure and, as such, can take a little while to find. But, no one really cares about him since many collectors got one at retail in the '90's and haven't thought about the figure since. Considering the quality of the figure, this is a paltry price to pay. Even with Gorky being a lesser character, there is no reason to not have him among the Oktober Guard displays since his coloring, mold and accessories certainly fit right in. Time has allowed me to more greatly appreciate figures like Gorky, even if I overlooked him at the time of his release. Given a chance, I think many collectors would feel the same. 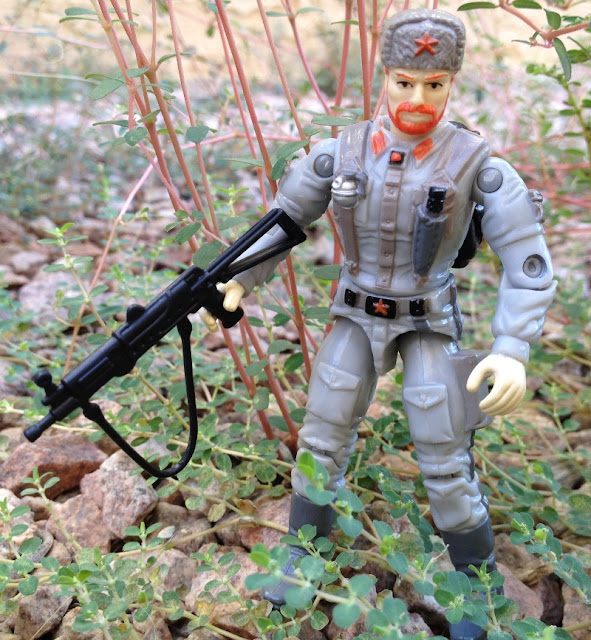 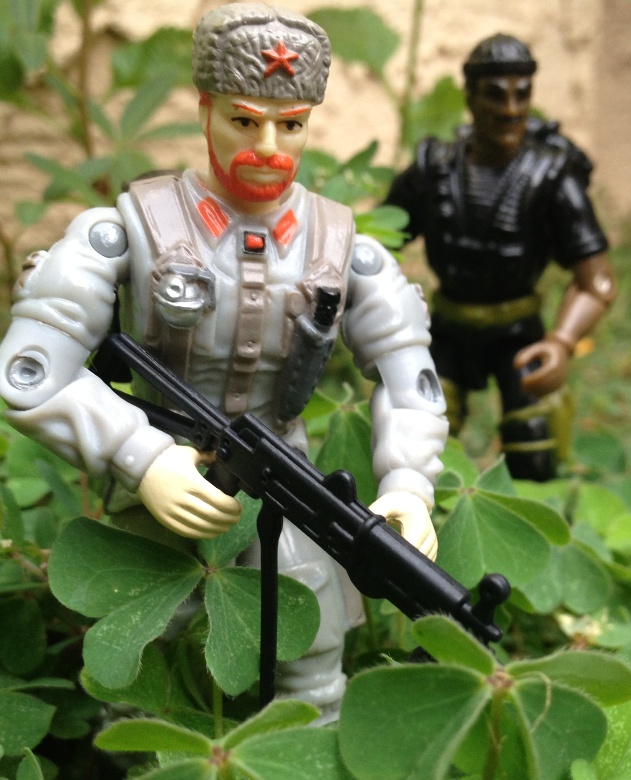 Lt. Gorky on the Web:

Lt. Gorky at Joeaday.com
Lt. Gorky at YoJoe.com
Posted by Robot_Sonic at 11:03 AM
Email ThisBlogThis!Share to TwitterShare to FacebookShare to Pinterest
Labels: 1998, Lt. Gorky, Oktober Guard