In the repaint era from 1997 though 2006, Snake Eyes was one of the most popular characters that Hasbro released.  However, the figures were limited to basically two molds, the 1983 or the 1989.  These molds quickly became diluted as version after version with only minor color differences were released.  At the end of 2004, though, Hasbro finally came through with a new take on Snake Eyes.  Instead of the tired molds, Hasbro brought back a repaint of the 1991 Snake Eyes.  A member of the Toys R Us exclusive Desert Patrol set, this Snake Eyes brought an environmentally themed figure into the Snake Eyes pantheon and gave collectors a hidden little gem in the line.

This figure is a straight repaint of the 1991 Snake Eyes. That mold has always been one that I've felt would greatly benefit from a repaint. This desert repaint proves that. The figure uses a black base to remain true to the Snake Eyes character. From there, it adds a bit of desert cammo on the paints and a great agave color bluish green on the tunic. Being a desert dweller, the vest color is often seen in nature in this part of the world and actually makes sense for a desert fighter to adopt. It would allow him to blend into the vegetation that actually does thrive in desert climates and it a great detail that makes this set all the more appealing to me.

But, the figure is still somewhat of a visual mish-mash. The desert camo is good. But, juxtaposed against the black torso, it clashes to a degree. Of the Desert Patrol figures, only Stalker really integrated the desert cammo into the full figure. And, as such, that Stalker is a figure for the ages while the rest of the figures in the set just sort of exist. (Of note is that the original set shown at the 2004 Convention actually had Ambush in the full cammo, too. But, that was changed prior to production and produced a much lesser figure than the original design.) The problem is that desert browns in a cammo pattern don't really work when the upper body is different. In the field, it could work since a person's legs would be closer to the brown ground and their torso might be shaded by a tree or cactus. But, the visual appeal of the figure is broken by the difference and the figure is more abrupt than it probably needs to be.

The Desert patrol set was the first TRU exclusive set to really abandon accessories altogether. Rather than try to include weapons that made sense for any figure, Hasbro just threw in a slew of random rifles, pistols and knives that were, generally, quite common during the time. As such, this figures loses the individuality of Snake Eyes accessories. The upside is that extra Uzis from the 1989 Snake Eyes mold were also common during this era and are a perfect match for this desert Snake Eyes figure. Outfitted with gear from the '89 Snake Eyes, this figure is ready for combat. (The '85 Snake Eyes' weapons don't really fit with the 1991 design, in my opinion.) But, the figure definitely needs an upgrade over the new sculpt, non-descript weapons that were intended for him in the set.

The 1991 Snake Eyes mold was used once in the Joe line in 1991. That figure saw a truncated release window, though, and isn't usually high on collectors' want lists. In 1995, Hasbro did use the mold again for the highly obscure and underrated Night Fighter Guile figure. This body was in all black and makes for a better Snake Eyes than the Snake Eyes figure. (Aside from a flesh covered open neck on the shirt.) When Hasbro returned to Joe in 1997, they tended to favor both the 1983 and 1989 Snake eyes mold. It was not until 2004 that this mold returned with this figure. But, Hasbro quickly made up for the long absence by using the head in the 2005 Winter Operations set and the releasing a full repaint of this figure in the awful 2005 Heavy Assault Set. The mold could have found additional life in some other fashions. But, at least Hasbro was able to squeeze a couple of decent Snake Eyes figures out of it.

The Desert Patrol set was limited to around 16,000 units.  While that number was often enough to sate collector demand, this set's release timing lead to many collectors missing it.  As such, today, this figure isn't very easy to find.  Despite its relative rarity, though, the figure remains criminally cheap.  While you might pay upwards of $60 for a MIB Desert Patrol set, you can often get the mint and complete component figures for much less.  Snake Eyes is obviously the most popular figure and will run as high as $8 to $12 from time to time.  But, you can get them cheaper if you are willing to sacrifice the filecard or just take your time for a mislabeled figure.  Regardless of the price, though, this is a figure well worth owning.  It gives Snake Eyes a different look, but still keeps within the established parameters of his character.  Hasbro often failed collectors in the repaint era.  But, in this case, they did pretty well and collectors should take advantage of those opportunities when they can. 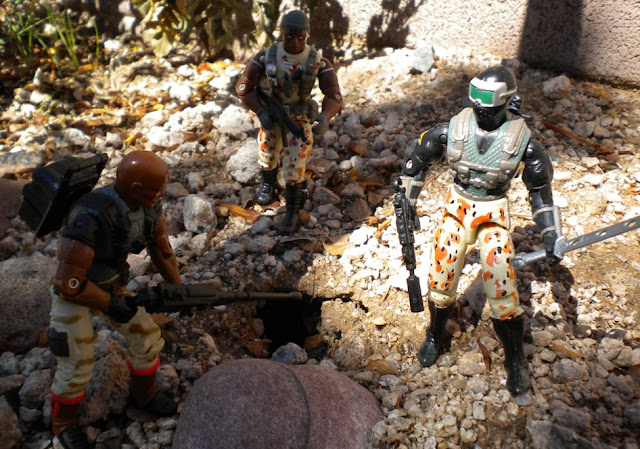