Action Force is one of the most popular foreign G.I. Joe concepts.  For many of the earliest collectors, Action Force was their first, and easiest access into the world of foreign Joe releases. The fact that Hasbro produced the figures means they are on par with the quality of American versions. And, the classic molds which were used to create the Action Force exclusives ties them to the iconic years of the Joe brand. Along with a few repaints of classic Joes, Palitoy released two exclusive Cobra repaints. One, Red Laser, was a straight repaint of the version 1 Cobra Commander figure. But, the modified paint masks on the head and the red body color help to differentiate him as a completely different character. The other, Red Jackal, was a repaint of the classic Destro figure. This reinvention, though, was not as drastic as that of Red Laser, but is still a different look for the Destro mold.

The differences between Red Jackal and Destro are not great. Officially, they should be considered different characters. Though, in the Action Force comics, many members of the Red Shadows organization went on to become the European origins of Cobra. The Red Jackal and Destro figures, though, use the same basic color palette. Both have a black base for the body, red highlights and the silver, chromed head. Visually, they are not overly distinct. The main difference between the two is that Red Jackal wears a red undershirt under his tunic. Forgoing the bare-chested 1970's inspired look allows for Red Jackal to also sport a thoroughly imposing skull and crossbones Red Shadows logo on his chest. It is this logo that provides the greatest visual disparity between the two. (And, also provides the greatest source of likely wear on the Red Jackal figure.) The similarity is nice, though, as it plays into my view of the figures within my collection.

To me, the Red Jackal character is Destro. It is the Destro, though, who operates in Europe and sells his MARS wares to European terrorist and splinter groups. Just as with Cobra in the United States, as certain groups gained more power, Destro would allow himself to be aligned with the larger organizations. That is why he was willing to wear the Red Shadows logo. He supplied the Red Shadows with massive amounts of weaponry. (Including the Hyena tanks that he also sold to Cobra under the name of HISS tanks.) Their financial wherewithal drew him into wearing their insignia when he traded his arms throughout Europe. Red Jackal is an example of the pre-Cobra Destro and allows some freedom in use of the character. He can appear in the Red Shadows mythos without overly convoluting the established Joe canon from the U.S.

Aside from just having a slightly different uniform, though, Destro also liked to trade under different names. If he was known as Red Jackal in Europe, Destro in North America and Outlaw in South America, it would be harder for the intelligence agencies of the late 1970's and early 1980's to understand that this was one person with a massive, worldwide network of arms dealings rather than three or four more regionalized, smaller producers. In time, though, as Cobra either absorbed or eliminated many of their competing organizations around the world, Destro abandoned his other names and simply became Destro. Ultimately, his split with Cobra took him back to his regionalized roots. But, then he was known well enough as Destro to do so. Plus, his new golden mask signified his break not only with Cobra, but his past personas as well.

Red Jackal was released as the driver of the Hyena tank. This was a repainted Hiss tank that was released under the Action Force brand in the early to mid 1980's. The Action Force line was one of the most robust toy lines released in the world. Complete with an array of figures, a villain and a fleet of vehicles, the Action Force toyline was every bit as large and diversified as the vintage Star Wars line. Had Palitoy found a way to get it into the U.S. market prior to 1982, there might never have been a G.I. Joe line. As the Action Force line matured, though, it slowly changed. Starting as 5 points of articulation figures, the line was infused with repainted G.I. Joe molds after Hasbro acquired Palitoy. These Joe figures and vehicles were sold for a short time. The line then changed again to straight up Hasbro produced Joe figures released on Action Force cards. Eventually, these figures were moved onto cards that were mimics of the American packages. With this metamorphosis, the unique heroes and villains of the Action Force pantheon were dropped and forgotten.

In the late 1990's and early 2000's, a UK based toy dealer offered up large quantities of bubbled Action Force figures, all packaged with accessories.  The actual figure released with Action Force toys, though, did not include these accessories.  The difference was that the dealer overstock was intended for future Action Force releases that were cancelled when the line was transitioned to repackaged G.I. Joe figures.  These bubbled, overstock figures were sold into the dealer market and then resold to many collectors around the world. The result is that figures like Red Jackal can be considered complete either with the full complement of Destro accessories or without.

The V1 Destro mold saw use around the world. But, of those figures, Red Jackal has the most differences from the standard, American figure. (Which isn't saying much when you consider how similar Red Jackal still is to Destro.) Besides the Red Jackal release in Europe, the Destro mold was also released in Argentina, Mexico and Brazil. After the mold's South American sojourn, though, it disappeared. Many collectors would have loved to have seen the version 1 Destro in his golden Iron Grenadier colors. (Just like they would have loved to have seen the 1988 Destro figure in a silver mask as an homage to version 1.) But, that was not to be. The mold has some great potential. But, as Hasbro had other Destro molds that they felt were good enough during the 2000's, they had no reason to go back and recreate this Destro version.

Red Jackal figures are relatively hard to find and somewhat expensive.  Being a European exclusive means that American collectors were aware of the figure from the earliest days of collectordom.  That allowed many of these to be imported to the U.S.  But, over time, those figures have been absorbed into the collecting community and remain locked away.  So, today, the figure is tougher to find than it was a decade or so ago.  Mint and complete, Red Jackals run in the $60 or so range.  Some go higher, some go lower depending upon the condition of the Red Shadow logo and the overall paint wear.  It's a lot for a slight repaint of Destro.  But, it's also kind of worth it to have a new take on the Destro character that can tie him more to his European roots.  For that reason alone, I find Red Jackal worth the expense and time it takes to add him to a collection. 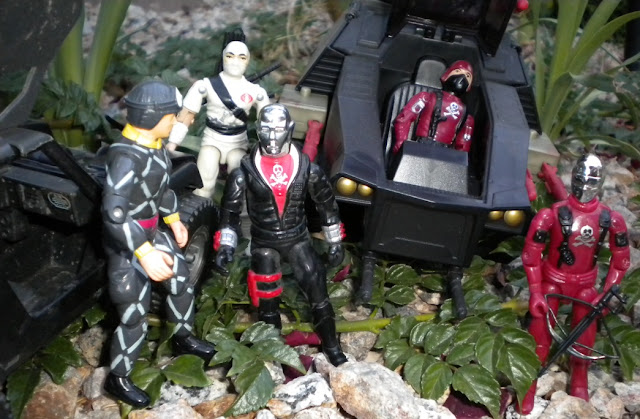 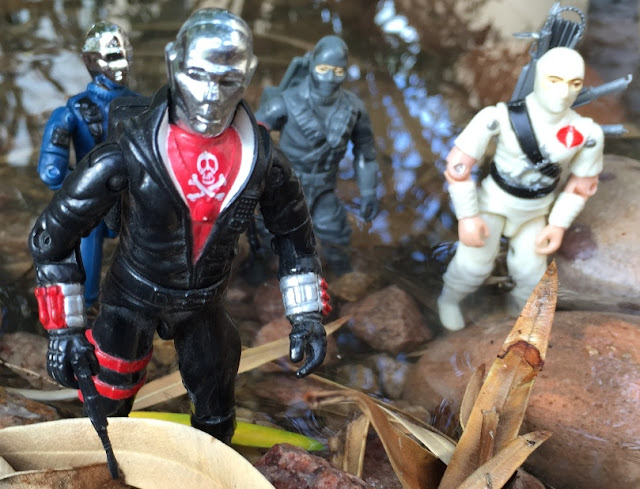