There are two different outfits currently making bootleg G.I. Joe figures: the Black Major and Red Laser.  I have looked at many of the Black Major's offerings a couple of different times through the years.  Red Laser is newer to the game, though, and I have not acquired any of his figures until recently.  Black Major currently makes Steel Brigades and Cobra Troopers.  Red Laser currently makes BATs and Cobra Vipers.  Normally, Vipers wouldn't excite me.  But, Red Laser added a bit of a twist: a removable helmet.  This little feature brings something new to the mold and has captured my attention for this week's profile.

In the vintage line, Hasbro released the Viper mold three times: the original, the Super Sonic Fighters Version and the Python Patrol Viper.  Between 1997 and 2006, though, they released (most of) the mold an additional 12 times.  (1 in 1997, 2 in 1998, 4 in 2002, 3 in 2003 and 2 in 2006.)  Despite all these incarnations, though, Hasbro really didn't explore the possibilities of the design.  If the Viper was Cobra's basic grunt, it would make sense to have uniforms for them that fit all of the environments where Cobra tended to operate.  Despite this obvious use, Hasbro failed to deliver on any Vipers that were remotely specific beyond the grey 1998 Cobra Officer and the green 2002 Viper.  The rest were just color mashes.  Some were well done.  Some were not.  But, as with the Cobra Trooper mold, Hasbro left so much potential on the table that even 15 versions of the figure were not enough.

Enter the Red Laser.  In the latter half of 2016, Red Laser began producing Viper figures.  They were designed to solve the missing legs that had plagued Vipers since 1997.  They brought back the original Viper rifle (which hadn't been seen in 30 years) and backpack.  But, the real selling feature was the removable helmet.  Rather than have a fully sculpted Viper head, the figure features a head based on the 2004 Crimson Guard figure.  Over the appendage fits a perfect rendition of the 1986 Viper's helmet.  It is tight fitting and accurate and, when on, is barely noticeable as anything other than the sculpted head we've seen 15 times before.  The series also introduced Vipers of different hair colors and races.  Hasbro has given us multi race Crimson Guards and Cobra Troopers.  But, they missed the boat on the Vipers in the 2006 Viper Pit set.  Now, though, you can add some diversity to the Viper ranks, even when the helmets are on.

There are currently three flavors of Viper available from Red Laser: desert, Eel and these Officers.  (I'm sure, though, that in just a couple of months there will be more and within a year or two there will be many more!)  The Officer is interesting to me due to the tie to the Stinger.  Cobra established grey as a base color in 1984.  So, it's been part of them since the early days.  And, the grey color is a nice contrast to the black Hiss Tanks and Stinger jeeps that comprise the bulk of my Cobra vehicles. These figures are a nice combination of grey and red with just enough black thrown in.  They are a brighter grey than the 1998 Toys R Us Cobra Officer, but not as light as the Stinger Driver or any of the bootlegs Bats, CG's or Cobra Troopers who were derived from him.  The color is a nice match for the 2005 Comic Pack Firefly.

The big difference from the 1998 Cobra Office is the red painted highlights.  The red pops more against the grey than does the gold from 1998.  But, the biggest red addition is the Cobra logo.  I don't really miss Cobra logos on the '98 figures.  But, having it on this figure is a real asset since it contrasts so well with the grey.  You could use these figures as the armies lead by the 1998 Officer.  Or, have one of these guys lead your squads of Officers.  Either way, they work well.

The figures are nicely accessorized.  You get a high quality rendition of the classic 1986 Viper rifle.  It is cast in a light grey color: darker than the original accessory.  It's a nice match for this figure without treading on the vintage gun.  Also included is a reproduction of the classic Viper backpack.  It's glossier than the vintage pack.  But, is otherwise tough to tell apart.  The coup de gras, though, is the removable helmet.  Hasbro never produced a Viper with anything other than the standard 1986 head.  Now, though, that has changed.  The helmet is very tight fitting on the figure's head and has to be pushed to get all the way on.  But, once on, the helmet covers the head almost exactly like that of the original figure.  Usually, removable helmets are far bulkier than sculpted heads.  (Think the 2005 Crimson Guards versus the originals.)  But, that is not the case with this Viper.  Part of that is the original head was better scaled.  But, it's also the strong design of this head/helmet combo.  You can see in the photos below how well the helmets fit.  I can not state how strong the design is on this element of the figure.

The real question on these figures is the quality.  The early Cobra Troopers were of excellent quality.  But, then there was quite a drop off in later Cobra Trooper batches, the Crimson Guards and the early BATs.  However, much of this has been corrected.  These figures don't quite have the full heft of a vintage Joe.  But, they are close.  The hard plastic is a concern.  You'll notice the crotch piece of these figures has been better engineered than the 2006 Viper Pit crotch to help avoid breakage.  The thumbs are another story.  You'll see the guns in the photos below are held somewhat awkwardly.  This is because, while the figs will hold the weapons and the thumbs don't break, the hard plastic makes it so the stocks pop out from behind the forearms.  There's just too much pressure and the weapon slides.  (Which is preferable to broken thumbs!)  Collector Cyko9 has recommended shaving down the gun handles a bit, though, to solve this issue and worry less about breakage.  These figures will stand on their own, though they do have to hunch forwards just a bit.

The paint masks are very sharp and crisp.  You'll notice it, especially, on the two tone eyes of the unmasked figure.  But, the factory quality is top notch.  The sculpting is clear and clean and is a solid match for the Hasbro edition of the figure.  The caucasian skin tone is the darker, sunburned look we often saw in the 2000's.  It works well enough.  The African American skin tone is dark and sharply contrasts with the lighter uniformed figures.  My packs snap into place on the backs and aren't as smooth as vintage figures.  I haven't tried the gear on vintage Joes to check for compatibility.  But, they fit tightly on the Red Laser releases.

Currently, these figures are available for around $12.  You can buy them up in lots, or as individual figures: to match your collecting style.  I'm sure the helmets cost quite a bit to develop and engineer.  But, they are worth it.  The colors for these Officer figures are right up my alley, even if the Viper itself isn't as big a draw.  If you are a Viper fan, these figs are worth checking out.  If you are an ARAH style Joe junkie, they are definitely worth checking out since we collectors of it have been left behind by both Hasbro and the club.  Fortunately, modern technology has made figures like this possible.  The fact that there's a couple of outfits making them just means there is more and more to collect.  And, that's exciting. 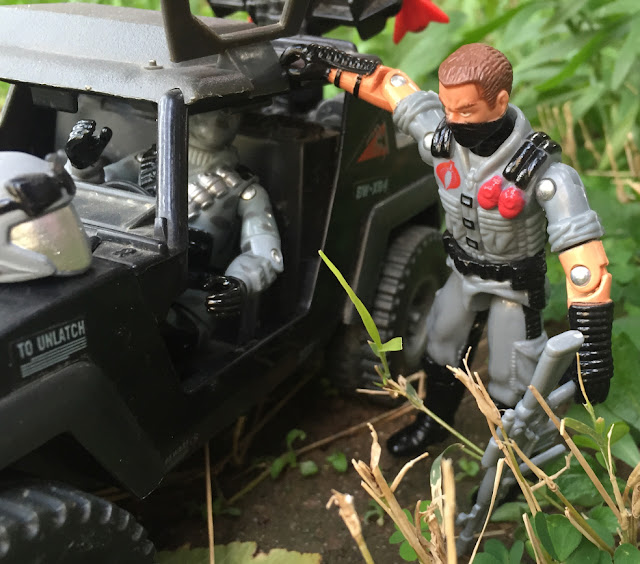 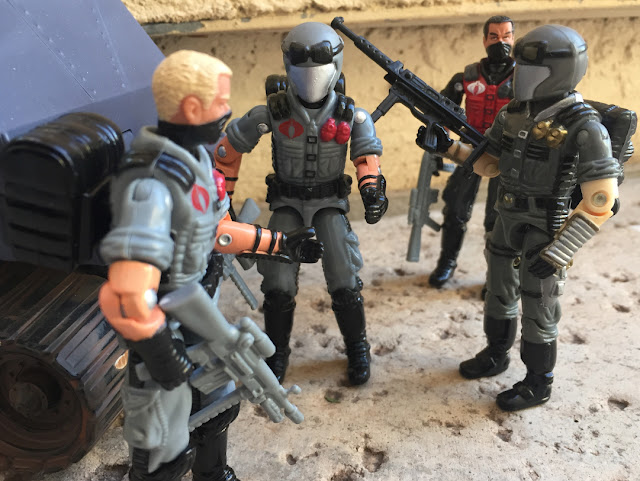 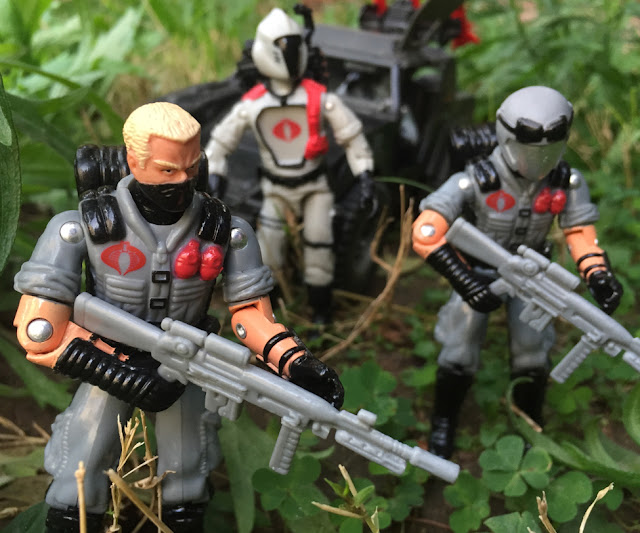 Posted by Robot_Sonic at 2:22 AM
Email ThisBlogThis!Share to TwitterShare to FacebookShare to Pinterest
Labels: 2016, Bootleg, Red Laser Army, Stinger, Viper