The last 4 months of 1998 were some of the best in my life.  Basically, everything that people consider to be major achievements in life other than having a child happened to me in those 4 months.  As such, I hold even minor events of that period in high esteem if only because they were made that much sweeter by the big things that happened, too.  Toys were just part of the overall ensemble of awesomeness that defined that period.

Star Wars toys were very frustrating.  The carded line had stagnated in May and several waves of figures simply never saw retail.  However, due to professional growth, I had the income to acquire these toys through the various retail avenues that were available.  Paying a buck or two more per figure wasn't a huge price to own something that I simply couldn't find.  But, with Star Wars malaise setting in, my attention was turned to Joe.  I had discovered Ebay and my G.I. Joe collection was growing every week.  In turn, Hasbro released a new series of Joes that started hitting retail in early December of 1998.  This series was higher quality than the 1997 releases and featured a collector friendly lineup of the Oktober Guard, an army building three pack of Viper repaints and a set of arctic Cobras with two army builders and the hugely popular Firefly figure.  It is from this pack that I take the subject of this profile, the 1998 Snow Serpent.

To tell a story of how different the times were in 1998, when I found the first cases of new Joes, it was this arctic pack that had sold out, not the 3 pack of Viper repaints.  Getting a new Firefly for the first time in 14 years was a greater draw than three of the best army builder repaints that were ever released.  It seems quaint now.  But, the arctic 3 pack was, initially, the fastest seller.  (1998 was still a time when a collector who happened upon a freshly stocked case might only be able to buy one or two of the new toys rather than them all.)  This quickly changed, though, and in the weeks before Christmas, all of the Joe packs became plentiful and were readily available.  And, I set out to build an arctic army.

The 1985 Snow Serpent is classic.  It is about the perfect arctic trooper.  However, the figure is wearing bulky, heavy clothes and carries massive amounts of gear.  If you were going to lay siege to Chicago in January, you'd want an army of 1985 Snow Serpents.  This, though, didn't fit my vision of Cobra.  To me, Cobra was a swift strike outfit.  They wanted to hit you and get out.  As such, a more mobile and nimble force made sense.  Enter the 1991 Snow Serpent.  This figure retained much of the idea and practicality of the 1985 figure, but make him sleeker.  It gave him a snowboard that would be much more conducive to swift arctic combat rather than long, drawn out campaigns.  The mold of the new Snow Serpent was also excellent.  He still had tons and tons of gear.  But, he looked more dynamic than his predecessor.  In short, this new Snow Serpent was a perfect upgrade that kept the integrity of the character without impugning the original version.  It's a tight line to walk, but Hasbro pulled it off with the Snow Serpent.

The 1998 figure took this mold and colored it in a scheme that's very complimentary of the 1985 figure.  Included with him were all of the 1991 accessories.  The guns were still in white but the snowboard was cast in a bluish grey that better matched the figure than the gnarly early 1990's purple.  The pack was now black, too.  Against the white figure, the black pack is a bit of a contrast.  But, it's also more realistic than earlier versions.  In short, the accessories were as good as or better than the 1991 figure's.

Using the 1991 gear also allows the figure a great deal of spectacular design.  The Hasbro designers were still on top of their game in 1991 and the Snow Serpent showcases that.  The guns are wrapped in cloth to keep them warm.  The figure's sleek head has a molded tie on the back that extends down to the figure's torso.  The fur vest and ear warmers are excellently detailed and showcase the character's need for warmth.  The pack is full of details and includes both a hose to connect to the guns and a slot to hold the snowboard.  It's a great accompaniment of gear that enhances the figure into the realm of the 1985 version for the best rendition of the character.

By the first weeks of January in 1999, I had bought a few of these sets.  I was not enamored with the Night Creeper (though I now see it for the awesome figure it is!) and my plans to army build Firefly figures were somewhat curtailed after I had a couple and I found the practicality of him as an army builder was far less fun than the idea of stockpiling him.  So, the sets faded from retail.  In July of 1999, though, Hasbro shipped another allotment of the 1998 Joes to Toys R Us stores in the lull of Episode I figures.  I think I bought 1 set at this time, but kept it carded.  Again, the figures sold out.  But, at Christmas of 1999, Hasbro shipped the third run of these figures and gave me a chance to pick up a few more.  I got one or two extras, but also kept them carded with plans to open them later.

However, I never got around to opening them.  They sat in a box.  As 2000 turned to 2001, though, I saw the prices on sealed Arctic Team and Viper Team sets climbing.  Rather than open them for more army builders, I discovered that the carded sets were extremely attractive trade bait with European and Brazilian G.I. Joe collectors.  In the latter half of 2001 and through 2002, I traded off all of my carded Polar Assault Teams and most of my carded Infantry Teams in exchange for European and Brazilian exclusive figures.  My Abutre Negro carded figure was acquired, along with Gatilho and Letal, for a package of one of these Arctic sets and 2 Cobra Infantry sets.  At the time, I wasn't sure that I came out all that well.  Taken in context of 2017, though, that deal turned out fabulously for me.  But, at the time, the Toys R Us figures were very expensive and few collectors had extras to send overseas.  Simultaneously, especially in Brazil, the foreign Joes were very available and hadn't attracted the collector eye that has raised prices on them in the past 15 years.

I've really only gotten to use this figure in the snow one or two times.  My favorite was the Saturday it snowed and I was able to get a full cadre of Cobras out into the weather.  But, the showcase of that photo shoot was the army of 1993 Snow Serpents and these 1998 versions were mostly filler.  After that, these figures never really got another chance to see snow and that has greatly limited their visibility among my Cobra army builder figures.  Even below, you will see one of the figures standing near a baby palm tree.  The visual just isn't right.  But, that doesn't keep me from enjoying the figure's design.  I only have a few of them, though, and their lack of numbers is largely a function of the fact that I have basically no occasion to use them.

This mold was used three times.  There is not a bad figure in the bunch.  Arctic figures are tough to design without staying true to a base of white color.  Unless you make that base arctic ice blue.  And, that's what Hasbro did in 1993 with the mail away Snow Serpent.  The blue is a nice separation from the 1991 while still staying true to the figure's purpose.  It is an excellent repaint and might even be better than the '91.  The Snow Serpent was also planned for release in 1995.  There are hand painted samples of the figure out there.  It's similar to the 1993 version, but with more color.  It, likely, would be the worst use of the mold and collectors really didn't lose out on it being cancelled.  This 1998 repaint, to me, is the best release of the figure.  You get a solid base without too much superfluous colors along with the full range of original accessories.  (Minus the spring loaded launcher.)  It's just about the perfect winter army builder.

Oddly, Hasbro did not pull the mold out again after 1998.  They found the 1985 mold for the Flaming Moth set in 2005.  You can't really knock that choice since it hadn't been seen on an arctic figure in two decades.  Hasbro really didn't have any slots into which this mold would have fit after 1998.  The only winter figures were Joes.  (Though, knowing Hasbro had the Wolf available is a bummer as a release of that with an Ice Viper and a repainted Snow Serpent would have been awesome.)  As all three versions of this figure are excellent, though, I don't think collectors missed out.  This is really a case where Hasbro delivered on the potential of the mold and you don't have great lament over what could have been.

In the early 2000's, at the height of the army building craze, carded Cobra Polar Assaults would fetch nearly $50.  Individually, the figures would sell for close to $20 if they were complete with filecards.  Loose figures, though, were very hard to find.  But, time evened that out.  By the early 2010's, 1998 Snow Serpents were easier to find and a lot cheaper.  Now, prices have stabilized.  Dealers will offer the figures in the $17 - $20 range with little success.  You can find loose, mint and complete with filecard figures for around $11 with regularity.  It might take you a year to build an army of 25 to 30 figures, but they are out there.  That price isn't bad, especially when you consider that the production numbers on these figures were likely lower than those of the 1991 Snow Serpent which sells for around the same price.  It's tough for me to wrap my brain around spending more for this figure now than I spent to buy sets at retail.  But, that was also almost twenty years ago.  So, I have to call myself out for being cheap.

None of that takes away from the sheer quality of this figure, though.  He remains one of my favorite cold weather figures and is always a welcome addition to my collection.  Were I to cull my winter forces to just one mold, this would be the choice.  The solid paint scheme, excellent quality, plethora of accessories and general solid design all add up to the pinnacle of snow themed Cobras. 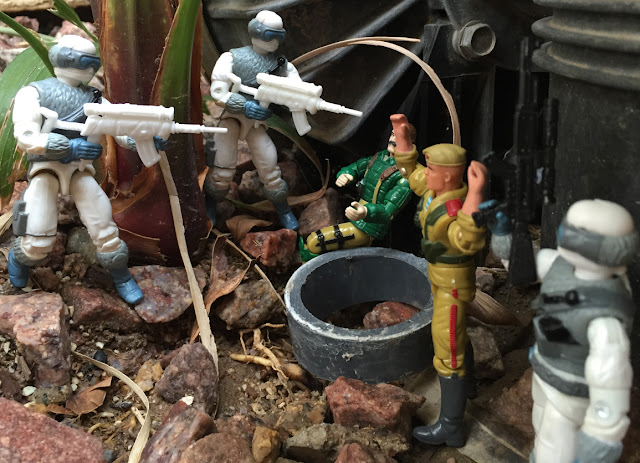 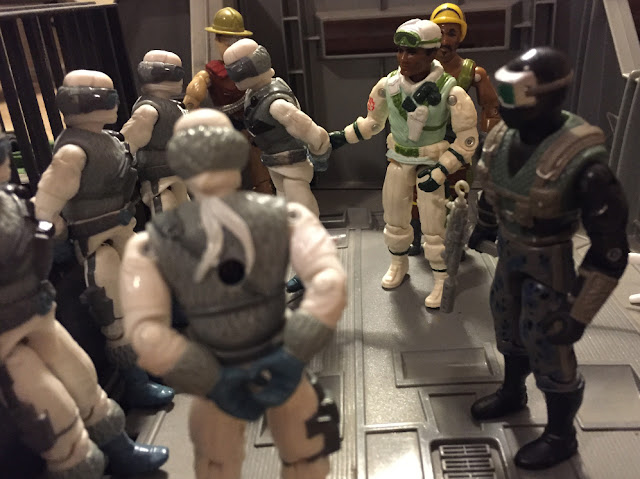 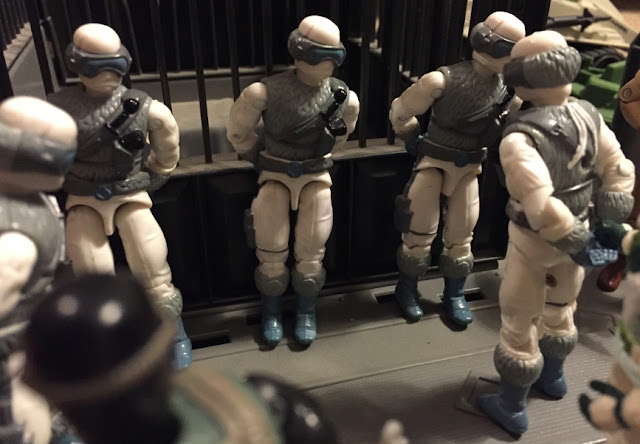 Posted by Robot_Sonic at 2:45 AM
Email ThisBlogThis!Share to TwitterShare to FacebookShare to Pinterest
Labels: 1998, Retailer Exclusive, Snow Serpent