It is no secret that my favorite subline of foreign G.I. Joe figures is the Plastirama line from Argentina.  My interest is heavily driven by the fact that it's a strong combination of exclusive repaints and slightly derivative remakes of classic 1983 through 1987 molds.  It was also readily available and very cheap to acquire in the early 2000's after a warehouse find in Argentina brought massive amounts of overstock to the U.S.  There are some quality issues among the figures, both in terms of construction and paint application.  But, those can be forgiven for the great diversity the line adds to any Joe collection.  I am also a big fan of the Blowtorch figure released in 1984.  In the US, the mold never saw any repaints and I was left with one version of the character.  But, in Argentina, Blowtorch was ubiquitous.  While there are two more famous repaints we'll talk about later, the main character of Blowtorch also got a full release.  Plastirama released him as Antorcha and he's a solid variant for any Blowtorch aficionado.

Just before school let out for the summer in 1984, my dad took a friend of mine and I to the local Children's Palace.  I don't recall which figure I bought that day (though, it was likely Scrap Iron), but my friend bought a Blowtorch.  We had fun the rest of that day with our new toys.  And, Blowtorch, while cool enough, didn't really leave a great impression on me.  It was not until the following Monday at school when he said he had been using the figure as a diver in his pool that the awesomeness of Blowtorch's mask sunk in.  Sometime that summer, my youngest brother acquired a Blowtorch.  For a few weeks, he was great.  But, my brother broke his mask and lost his flamethrower.  Without these, the figure suffered.  As 1985 began, one of the Joe products I was most looking forward to was the 1985 Battle Gear pack.  I assumed it would include Ripcord's mask and parachute, Mutt's muzzle and, of course, Blowtorch's gas mask.

When the set appeared, though, the gear I most wanted was all absent.  That disappointment lasted for a long time and soured me on the battle gear in general.  But, the real loss was that Blowtorch didn't get a new mask.  So, while I read great stories using Blowtorch in the comic and really wanted him to be a part of my collection, I couldn't get excited for him since the one in our house was damaged.  (I went so far as to use electrical tape to tape the mask to his head to try to get some use from him.)  So, Blowtorch went largely unused and was a gap in my collection that I wanted to fill.

If you fast forward to the late 1990's when I was building my adult Joe collection, though, I rectified this loss.  In short order I had more than half a dozen mint and complete Blowtorch figures.  Every time I saw one, I bought him.  It was an attempt to make up for not using him as a kid.  But, even with all these new samples around, Blowtorch didn't get much use.  I had so many other new figures that I never really utilized the figure as much as I wanted.

Then, I found the Plastirama figures.  Seeing my childhood favorites in slightly altered colors was interesting as it made these old figures new again.  I set about acquiring all of the Plastirama figures that were readily available and picked up most of the line in fairly short order.  Among these was the Antorcha figure.  The deeper yellow and red colors combined with the sunburned skin tone really made the figure pop to me.  It brought the Blowtorch character back into my collection in a new way that was fresher than a 20 year old retread.  Now, that's my enjoyment of the figure.  He's a different way to display and showcase Blowtorch.  Anyone who sees him knows that he is Blowtorch, but also notices that he's a bit different.

Plastirama used the Blowtorch mold three times.  In the regular carded line, the exclusive TNT figure is the most famous usage.  The Backstop figure included with the Persuader was the second.  The final was, basically, just a slightly redone American Blowtorch named Antorcha.  All three figures used the full Blowtorch mold with the exception of the waist piece.  Instead of Blowtorch's waist, the figures all use the waist from Doc.  Visually, it's not really important, except that Doc's waist is a bit smaller than Blowtorch's.  So, the figure appears a bit out of a balance as you have a bulky chest flowing into a skinny waist that then expands into puffier legs than were designed for the waist.  As such, you have to be careful as quick, harsh movements can snap Antorcha's crotch instantly.  You see large quantities of Antorcha figures from childhood Argentina collections with broken crotch pieces.

Antorcha's accessories are different from the American Blowtorch's.  Well, at least partly.  The backpack and airmask are the same and are in the same, yellow color as the US figure.  Antorcha's helmet, though, is not the traditional Blowtorch helmet.  Instead, it is a yellow repaint of the helmet released with Doc in the US.  Rather than the traditional blowtorch, Antorcha includes a black version of the acetylene torch that was included with the 1985 Torch figure.  The black torch is also available with many other Plastirama figures who have common accessory variants.  I have not seen any Antorcha figures with a different weapon than the torch.  But, considering the randomness of Plastirama accessory distribution, it's possible that a carded figure may exist with a different weapon.  But, as the preponderance of Antorchas include the torch, it should be considered the figure's default weapon.

If you are a Blowtorch fan, there's a lot to track down.  But, a lot of it is the same.  After his American release, Blowtorch  showed up in various other countries whose Joes were produced by Hasbro.  He then went to Brazil.  The Brazilian figure is, basically, the same color as the American figure.  There's some slight difference (especially in regards to the green color of his flamethrower) but he's pretty much the same.  Auriken then produced a Blowtorch figure that's also very similar to the American figure.  From there, the mold went to Argentina.  Plastirama finally brought some diversity to the mold with the release of both TNT and Backstop.  However, both figures still use a lot of yellow.  Then, you have Antorcha, who's also, basically, the American figure.  So, there's 6 uses of the mold: but 4 are basically the same and the other two are just slightly different.  I'd have loved a Night Force Blowtorch, an Action Force green Blowtorch, a Sky Patrol Blowtorch (though TNT kind of fills that role), a wacky Funskool Blowtorch and even a desert themed Blowtorch.  In short, I'd have taken just about any repaint of the mold we could have gotten.  But, there's a lot out there for the character and mold.  So, I can't complain too much.

In the early 2000's, carded Antorchas could be had for under $10.  But, Antorcha was in an assortment that wasn't as common as some others.  Slowly, Antorchas started to dry up.  Over time, carded figures started to climb upwards of $25 each.  Now, pricing is up and down.  You'll see some sell for $60 and some sell for $30.  But, the days of getting one for $10 are long gone.  Loose, mint and complete versions are fairly rare to come by as most of the stock was carded and stayed that way.  For the price, buy an American Blowtorch and some other figures.  He's better in every way.  But, as another foreign version of a classic character, Antorcha is worth owning.  I'm just not sure he's worth the current pricing.  But, he does bring something different to the Blowtorch character and nicely diversifies a collection. 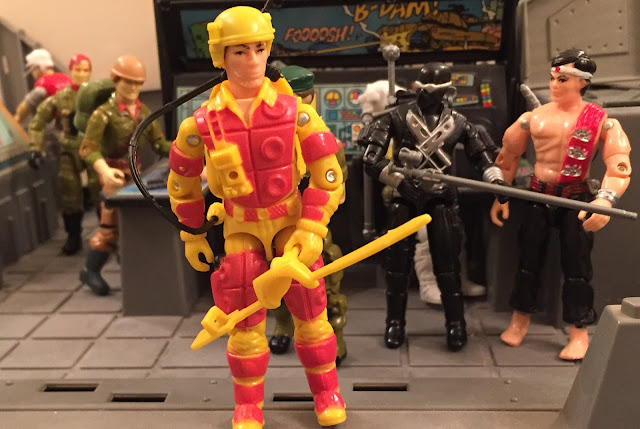 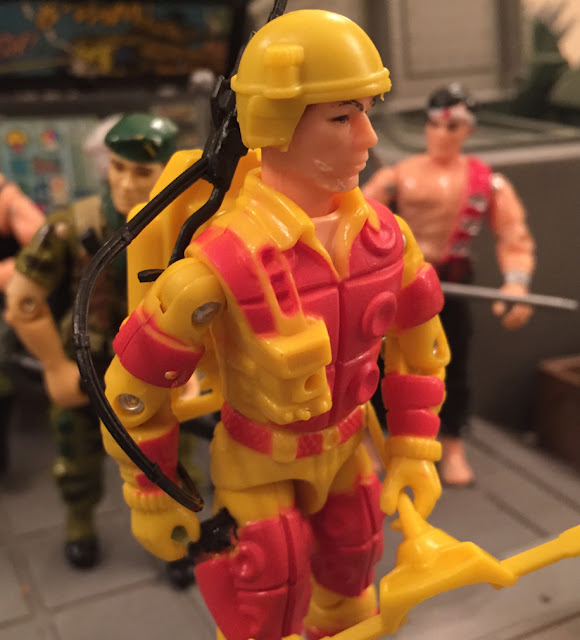 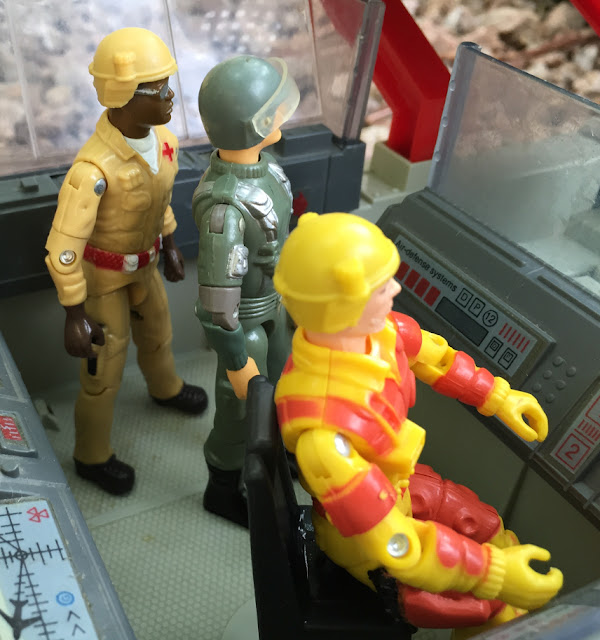 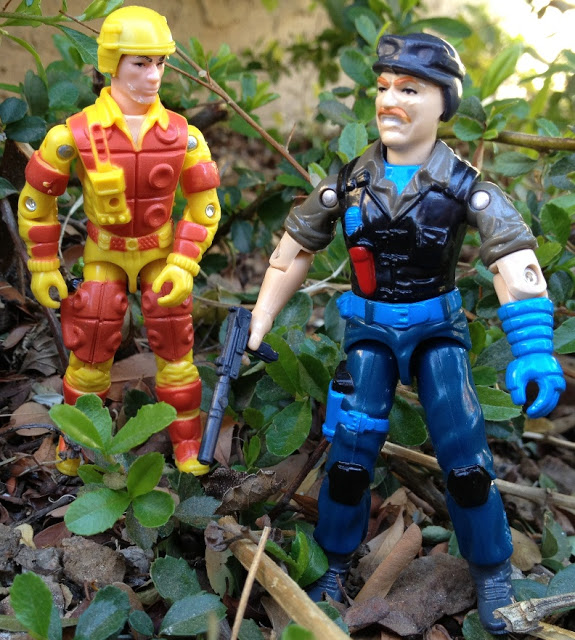 Posted by Robot_Sonic at 3:30 AM
Email ThisBlogThis!Share to TwitterShare to FacebookShare to Pinterest
Labels: Antorcha, Argentina, Blowtorch, Foreign Figures, Plastirama