In 1988, Hasbro pivoted the G.I. Joe brand a bit.  Cobra was de-emphasized for that year and a new villain for G.I. Joe was introduced: the Iron Grenadiers.  Lead by the popular Destro, the Iron Grenadiers brought a third dynamic to the Joe world.  They were given several figures and large run of highly complex vehicles.  The figures and vehicles were unified by a black and gold theme.  However, there was a single deviation from this palette in 1988.  Along with the army building figures and Destro, Hasbro also released Destro's top general for his troops: Voltar.  Voltar featured a unique color base with some unifying elements.  He is a figure that suffers from poor color choices, but still remains somewhat popular.

My younger brother got a Voltar figure at some time in 1988.  He was the least interested in Joes and quickly left the figure and moved on to other things.  At the time, I was not buying or playing with Joes.  But, I kept an eye on anything my brothers acquired.  The same brother had gotten an Iron Grenadier figure the same year and I had found that design incredibly cool.  When I saw the Voltar figure, I initially thought he was pretty nice looking, too.  I found him discarded in our spare room one day and put him together with all his gear.  As I looked at the assembled figure, I thought he was very nice.  However, in short order, I found that he wasn't all that much fun to use.  The bizarre color and golden accessories were just a combo that didn't really work for me.  I tried to incorporate Voltar into a story, but he couldn't retain my attention.

In the comic, Voltar was kind of the same.  He wasn't all that interesting and his appearance did little to increase my interest in the character.  So, Voltar quickly fell into obscurity.  When I opened up my box of Joes in 1997, there was a nicely conditioned Voltar still there.  However, as I was looking for figures to represent the characters I had designed a few years earlier, Voltar was never really considered.  He couldn't beat out the 1992 Firefly, 1994 Metal Head or the 1993 Dr. Mindbender for a coveted spot on my new Cobra roster.  That speaks volumes to my opinion of the figure.

Voltar's gear is odd.  His gun is a rather terrible sub machine gun.  I've never liked it and grew to hate it when Hasbro kept recoloring it as part of 1993 and 1994 weapon trees.  The gold color is gaudy and somewhat fresh for a 1988 release.  But, the design is really limiting.  Voltar then includes a golden backpack.  It is large, but doesn't really seem to do anything.  It's designed as a communications pack.  But, that seems out of place for a general.  It has a handle on it as well as a protruding arm.  The arm is actually a perch for Voltar's most unique accessory: a vulture.  The bird is well designed enough to recognize as a vulture.  And, it has a red head to further the illusion.  As animal companions go, it was better than Spearhead's bobcat.  But, not quite up to Polly or Freedom standards.  The figure looks much better with his full load of equipment and they match his look quite well.

The introduction of the Iron Grenadiers in 1988 is somewhat peculiar, too.  The G.I. Joe Movie was released in 1987 and, at the time that the 1988 figures would have been in pre-production, it was not yet known that the Transformers movie would flop and G.I. Joe would be relegated to off hours TV airings and VHS sales.  We do know that Cobra La would have continued into 1988 and some of those designs (the Nullifier specifically) were co-opted into other parts of the line.  But, this was a rebranding of already designed toys.  So, Destro and his Iron Grenadier cohorts was likely always planned for a 1988 release.  It may be that Cobra Commander's movie fate lead the brand stewards to bring about a new enemy with a new leader while they tried to get everyone to forget about the Commander.  In the comic, the introduction of the Iron Grenadiers brought another interesting dynamic.  They were not, specifically, enemies of G.I. Joe.  Really, they were just a third faction out for themselves and, at time, the personal interests of Destro himself.  They were a nice diversion as the '80's wound down to help break up the continuity.  But, when Destro returned to the Cobra fold, it felt like the comic was finally getting the band back together and all was right in the Joe world.

The Voltar mold was used just once in the U.S. for this 1988 release.  He was also packaged into a two pack with Muskrat and sold as an "Ultimate Enemies" set.  That figure is the same as the standard carded figure, but has an orangish/yellow filecard like the parachute pack Hit and Run. Around 1993, though, the figure appeared in Brazil where he was released as Mestre Rapina.  The Brazilian figure is a lighter purple color and is probably a better version of Voltar than Voltar himself.  The mold never appeared again after that.  Collectors would have welcomed a Voltar repaint during the 2000's.  But, it never happened.  In 2005, the Iron Grenadier themed convention set would have been an excellent way for the character to return.  Instead, though, a new character named General Mayhem was created.  The new character was created to be different and stand on his own.  But, he seems to at least have a bit of an homage to Voltar's original design.

Voltar's mold, though, is a staple of the vintage customizing community.  One of the rights of passage for any customizer seems to be a more realistic take on Voltar.  Some of the customs are good.  But, mostly, they show the limitations of the design.  The figure's head is tough to disguise and, while it does look better in some different colors, it's difficult to overcome the basic mold limitations.  In the end, Voltar is kind of a mess and even enhanced paint applications can't cover that up.

Voltar figures are relatively popular.  The easily broken vulture helps to prop up pricing.  Mint and complete with filecard Voltar figures usually sell in the $8-$10 range.  Dealer pricing tends to run between $12 and $15.  So, there's not the gap for high quality figures between market and dealer sales like you see on other figures.  There's ample supply of the figures and if you are willing to sacrifice the vulture, you can get Voltar's for almost nothing.  But, in the end, the limitations of the figure persist.  To me, Voltar is just a figure that I have.  Even when Iron Grenadier figures were prominent in my collection, Voltar was an afterthought.  The pink hue of his uniform and overall absurdity of his golden trimmings pretty ensure that he will always remain one, too. 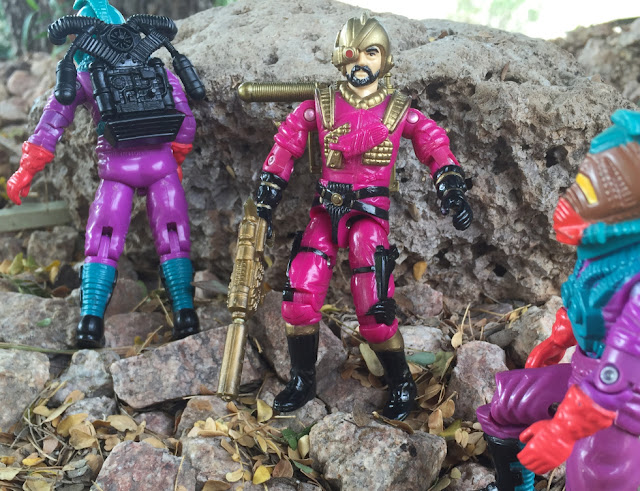 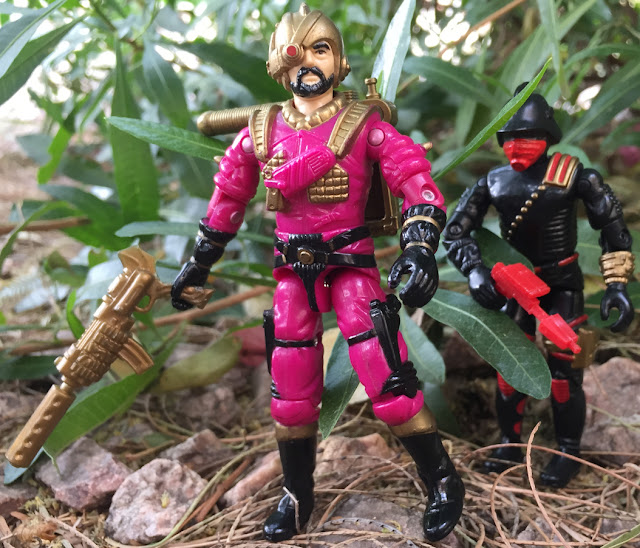 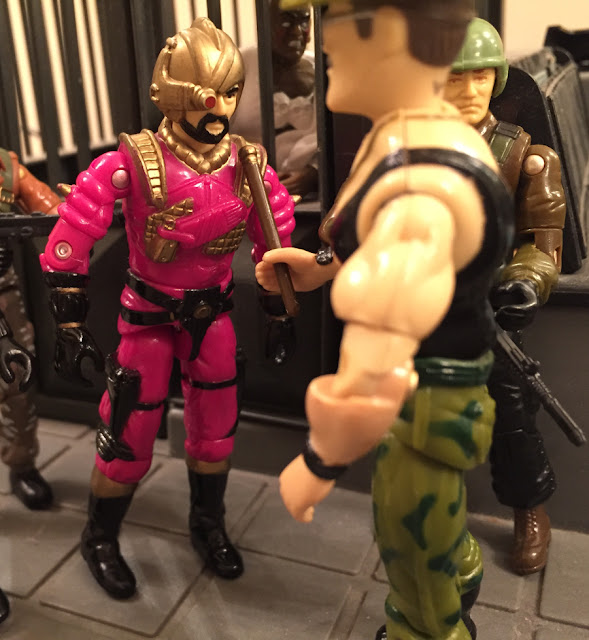 Posted by Robot_Sonic at 2:22 AM
Email ThisBlogThis!Share to TwitterShare to FacebookShare to Pinterest
Labels: 1988, Iron Grenadier, Voltar