In the 17 years that have passed since I first looked at this figure, my feelings on him have changed.  In 2000, I was a wide eyed, neophyte collector.  Much of the Joe line was new to me and the excitement over owning something I had never owned before far outweighed my nostalgic feelings.  Now, though, there are few vintage figures with whom I'm not overly familiar.  And, in an effort to streamline my collection a few years ago. I trimmed down much of what I had to heavily focus on the years from my childhood.  The 1986 Viper came near the end of my toy playing days.  And, as such, has many memories associated with him.

I spent most of 1985 buying pretty much every Joe toy.  For Christmas that year, I turned to the SMS as the last Joe toy I'd get that year since my parents would not get us a Flagg.  As 1986 dawned, a kid in my brother's class got most of the new Joes in February.  I spent the rest of the year trying to catch up.  In short order, I had most of the new figures.  But, if anyone got a figure before I did, I was compelled to create an exciting, multi part adventure for that figure that would drive me to find the figure for myself.  Such was the case with the Viper.  My brother's best friend got one before I did.  On days we got out of school early, we'd go over to this friend's house.  There, in his toy room, I concocted a story where the new Cobra Vipers, armed with their massive new rifles, overtook a group of Joes.  They shot Hawk: giving him a sucking chest wound that Lifeline had to deal with using his spectacular air mask.  For the next few weeks, the Joes were on edge, waiting for these new Cobras to show up again.  Finally, I found a Viper at retail and he quickly became the mainstay of my Cobra army.

Before too long, that Viper's right thumb and crotch were broken.  I ended up buying another one to have a decent Cobra soldier in my collection.  The beat up figure found a home in one of the gunner stations of the STUN.  For a 1986 figure, though, this type of abuse was rare.  I had spent the first part of 1985 heavily beating up my figures.  But, the latter half of the year, I was much more likely to treat them well.  I spent the summer of 1986 buying new versions of the 1985 figures that I had worn out.  But, rare was the 1986 figure who suffered the same fate.  This shows how important the Viper was to me.  He got lots and lots of use, often dying spectacular deaths that lead to the breakage of his weakest points.  But, having a spare was also a great insight into the value of army building.  It was nice to have the same figure fill multiple roles within Cobra.  And, between the STUN and Thunder Machine, I had a wide array of uses for a beat up Viper who could no longer hold a weapon.

In looking at this Viper from a purely objective standpoint, he has great points and some limitations.  Color wise, the figure is about perfect.  You have the basic Cobra blue matched with dark red, all offset by black.  He's, basically, the poster child for everything you could associate with Cobra.  But, looking a bit deeper, this figure is also pretty basic.  The most glaring point is the goggles on the helmet.  (Why a person wearing a full face shield needs goggles, too, is another questionable aspect of the figure.)  They are just painted solid black.  The lenses lack an additional paint application.  The same is true of the grenades and clasps on the figure's body armor.  When you get down to it, this figure has only three paints masks: black, silver and red.  In the 2000's, we ridiculed Hasbro for going so cheap on the Viper.  Yet, the original figure was really the reason for this.  At his core, the fig is pretty generic.  He only has two accessories: neither of which are all that complex.  Despite this, though, the figure works.

If you want Vipers, there are tons and tons of them out there.  Hasbro released repainted 1986 molds in 1989 in Python Patrol colors and in 1990 in the Super Sonic Fighters line.  There are then 12 repaints of the Viper that were released between 1997 and 2006.  (These all have mold variants, but are clearly Vipers, even if some are Cobra Troopers and Officers.)  If the new sculpt figures are your bag, the character appeared three times in that format.  And, if you like anniversary figures, Vipers have appeared at least 13 times in that format.  If that's not enough for you, Red Laser's Army has created modern bootlegs of the figure who appear in more and more colors every few months.  So, basically, you can spend a lot of time just collecting Vipers without even talking about army building them.

It should be noted that while the Viper never showed up in any international collection, his legs did.  Hasbro used the figure's legs and waist for the 1993 Dr. Mindbender figure.  When that mold was sent to Brazil, the legs for the Viper were "lost".  This explained the later figures all taking lower body parts from BATs or having them resculpted.  There are also two variants to the Viper.  The red coloring on the figure can vary slightly from one to another.  If you get a bunch of them together, you can see the slight differences as both variants seem to exist in equal quantities.

There's something about this original figure that really defines Cobra.  There are nearly 20 different variants of this mold available.  Yet, you'd be hard pressed to find any collector who wouldn't agree that the original is still the best.  Even the 2006 repaints who were designed to improve upon the 1986 figure failed to deliver.  The blue body, black armor, red highlights and silver face shield armed with the white rifle make for an imposing enemy.  And, even for me, they retain a soft spot in my collection.  This guy was first enemy who could match the Joes in firepower, armor and field capabilities without being overly specialized.

In the early 2000's, as the army building craze was going full force and collectors had fewer repaint options for the this character, Vipers were $25 figures.  Due to that old pricing, many dealers still ask, and get around that price for mint and complete with filecard figures.  On the open market, though, Vipers are around a $13 figure.  And, if you can find them in small army building squads, that price falls further.  But, the ubiquity of the later repaints of the Viper character helped to sate collector demand.  When you could buy 1 Viper or a set of 6 Vipers that were painted like the originals for the same price, something had to give.  Still, collectors love to army build this figure and he will always be popular.  While I vastly prefer the original Cobra Trooper as the backbone of my Cobra army, there is something about a squad of Vipers, armed with better gear, that does put the troopers to shame. 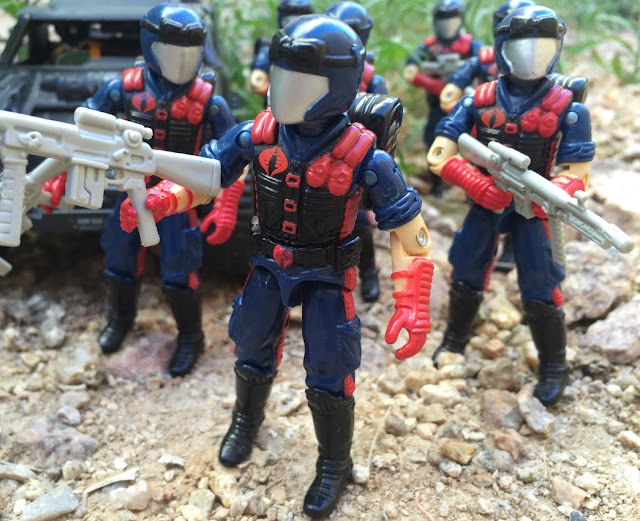 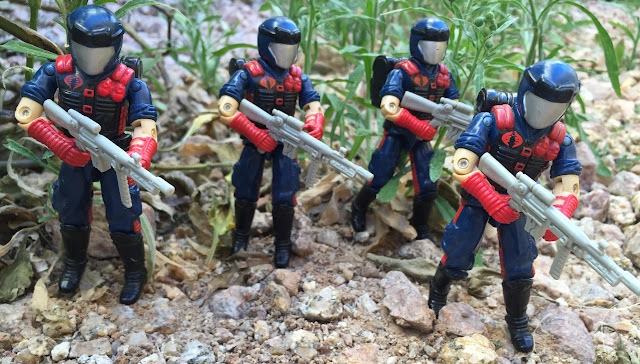 Posted by Robot_Sonic at 2:00 AM
Email ThisBlogThis!Share to TwitterShare to FacebookShare to Pinterest
Labels: 1986, Viper