I enjoyed "Rogue One" as a movie.  I thought it had a lot of fun points and was visually entertaining.  As I left the theatre, I was still conflicted, though, about the two main characters: Jyn Erso and Cassian Andor.  Cassian, in particular, didn't resonate with me.  I felt that he was kind of there and didn't really have much going on.  Frankly, I think they should have combined his and Bodhi Rook's character into one and it would have made him a bit more interesting.  Jyn, though, had a little more going on.  I felt that they did a decent enough job of introducing her, getting you to care and then sacrificing her at the end.  But, with her story self contained in the single film, I wasn't heavily invested in the character.  Unfortunately, if you want to buy Rogue One toys, Jyn and Cassian comprise a disproportional amount of the figures offered.  Without any real connection to the characters, I avoided their figures and bought a few other characters who did resonate with me instead.  After my profile of the Black Series Death Trooper, though, I had several people reach out to me singing the praises of the quality of the Jyn Erso figure in the same wave.  As she was pegwarming at my local Wal Mart, I broke down and picked one up.  And, I am glad I did.

I've collected Star Wars figures on and off since 1995.  In that time, they've gone from horribly dated, muscular sculpts to superb super articulated offerings and back to 5 points of articulation like the vintage days.  Being a G.I. Joe collector first and foremost, I've long just accepted the difference in construction and articulation.  In fact, I enjoy the difference between the lines as it makes them different.  But, the limitations in posing Star Wars figures as opposed to Joe does restrict them.  For the most part, Star Wars figures look good on a shelf while Joes, to me, need to be played with.  But, the super articulation era of the late 2000's really changed that for me.  So many figures from that era were excellently articulated and it spoiled me as a fan of the figure franchise.  So, seeing the new movie figures in the Disney era mostly 5 points of articulation was a huge disappointment.  But, the Black Series figures have kept the spirit of the 2000's alive. And, the articulation on this Jyn actually surpasses that of G.I. Joe figures.

This Jyn has joints everywhere.  Her ankles, knees, thighs, hips, waist, shoulders, elbows, wrists and neck all are articulated.  There are few poses you can't put her in.  But, unlike the modern G.I. Joe figures, I don't find the articulation to take away from the aesthetic of the overall figure.  The joints are part of the design and aren't the dominating visual feature.  The joints move well and allow the figure to hold her weapon and stand without too much trouble.  The one limitation is that her trigger finger isn't well formed.  On the figures from the 2000's, you could position their finger through the trigger guard of the various weapons.  With Jyn, that's not possible.  They kind of started it, but doesn't seem they followed through on their desires.  It makes for a bit of an awkward positioning of her gun in her hand.  But, for figures with holsters, I prefer the weapon to be sheathed anyways.  So, it's less of a concern than it would be for a Stormtrooper.

This figure's accessories aren't great.  She has a pistol, rifle stock and rifle barrel.  Supposedly, the guns in Rogue One were a big deal as they could be put together and taken apart for various functions.  It was only after I read this that I really noticed it in the movie.  From a toy perspective, Jyn's weapon is over-engineered as a piece.  Just having her pistol that fits into her holster is enough for her.  It would have been nice to get a few other items from the film...especially when you consider the price point of the figure.  But, the fact that the parts can be combined into one weapon is interesting and the accessory is well detailed and painted.

The figure's likeness is ok.  Jyn's eyes generally appeared darker in the movie and this figure's face is more a doll than the tougher, weary eyes from Jyn in the movie.  As a human face, the sculpting is fine.  It's not bizarre or badly proportioned like many Hasbro Star Wars figures can be.  But, it's also not really true to Jyn.  Finding the head in a bin of parts, I'd be hard pressed to match it up to Jyn.  It lacks the experience you see in Jyn's countenance in Rogue One.  She's young, but been through a lot.  This figure appears too wide eyed and gentle to match up with someone willing to give their life to salvage their father's legacy.

For a collector like me, 2017 will not bring much in the way of exciting new toys from Hasbro.  But, 2018 promises the return of super articulated figures to retail release.  The downside is that they are likely to be almost restrictively expensive.  I love picking up a couple of figures for my kids.  That's about $25 right now to do.  If that becomes $50, though, is a different story.  You can buy a lot of kid's toys for $50 and three Star Wars figures don't really hold up to the value that money can get you from other lines.  But, if the 5 points of articulation figures continue for kids, then that will be fine.  Even as a collector, though, the higher price point poses a problem.  At $15+ per figure, I'll be very selective as to which characters I purchase.  You can buy almost every vintage Joe for under that price.  So, if Hasbro releases 30 or more figures per year, it's unlikely I'll pick up even a third of them as the rest of the money would be better spent finishing up my vintage Joe run.

This Jyn shipped in the same case as the Death Trooper.  They didn't seem to ship for very long as they started in October and seemed to be pretty much out of the system by Christmas.  But, even the Death Troopers proved to not be overly difficult to find at the time.  This Jyn, though, pegwarmed massively.  Wal Mart reduced its overstock Black Series figures to $5.83 in March of 2017.  (This clearance also seemed to bring the rest of the missing stock for Jyn's wave to retail, putting even more on the shelves.)  Even at this price, the figure was embarrassingly available.  So, based on this and the fact that Jyn hasn't seemed to resonate with fandom like some other movie leads, I would expect this figure to remain relatively worthless for a long time.  But, there are many cases where a high quality figure pegwarms and collectors ignore it, thinking they can get it any time.  It then disappears on clearance and suddenly the figure takes on a great aftermarket run.  Usually, though, these are highly obscure and collector oriented characters.  So, I find that unlikely for Jyn.  But, should she show up again in some other Star Wars media...well...weirder things have happened. 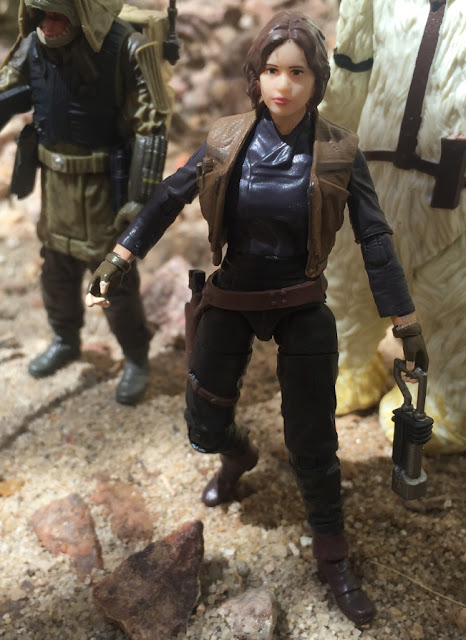 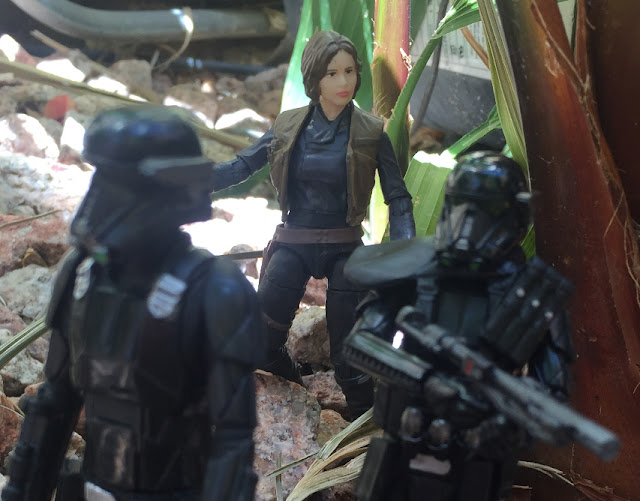 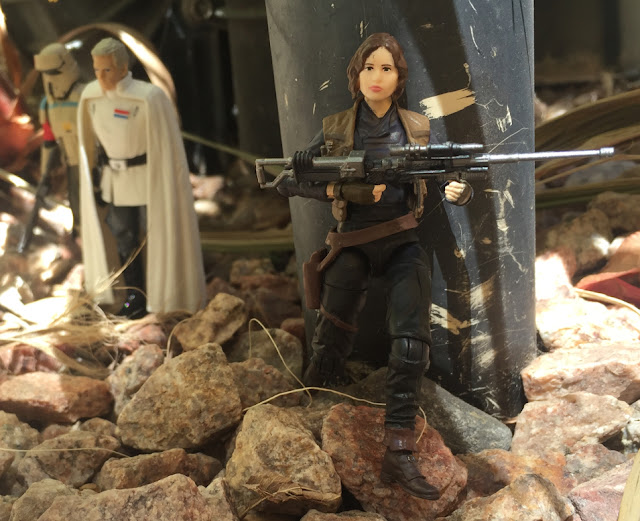 Posted by Robot_Sonic at 1:30 AM
Email ThisBlogThis!Share to TwitterShare to FacebookShare to Pinterest
Labels: 2016, Black Series, Jyn Erso, Star Wars