First impressions can be tough.  They are a vital part of the human decision making experience.  But, in cases where they are wrong, you can miss out on something great.  Months and months ago, I saw the publicity photos of a figure from the new movie, Rogue One.  It was a dark skinned Calamari who, at the time, appeared to be wearing an Imperial uniform.  My thought was that it was lame to make a dark skinned alien be a bad guy.  And, I put the figure out of my mind.  I really didn't have any anticipation of seeing Rogue One.  So, I forgot about the figure entirely.  Fast forward to December of 2016 and events conspired on the film's opening night where I ended up attending a late showing.  I left with Rogue One tentatively holding a place among my top three Star Wars films.  But, one takeaway from the screening was the impression left by the new character Admiral Raddus.

Doing a search on the character in the following days from watching the movie turned up the old, forgotten images of the character.  Seeing that he was going to have an action figure was exciting.  But, I could find no info pertaining to his release date.  Slowly, I came to know that he was a future planned release.  As I started re-following the Star Wars toy news a bit more closely, I also started seeing the rumors that his wave might be cancelled or available in extremely limited quantities.  This was disconcerting as Raddus was a character of whom I wanted a figure.  But, it eventually became apparent the toy would see some release: it was just not known how easy the figure would be to find.

As my local Wal Mart sold out of single carded figure in early January, I held up hopes that, were the figure released to retail, I might luck out and be one of the stores likely to get the wave.  Months passed, though, and the Wal Mart never restocked.  Empty pegs stared out at me, even when reports of new figures being found at Wal Marts around the country were pouring in.  So, I resigned myself that, even if the figure did appear at retail, it would be unlikely to hit my store rotation.  Soon, Raddus began to appear online.  The prices were far higher than I really wanted to spend on a figure like this.  But, still, he was character that a repeat viewing of Rogue One had confirmed was interesting enough to warrant a toy in my collection.  Finally, prices dropped low enough for a stand alone purchase that I bit.  Overall, I probably overpaid for Raddus.  But, in grouping him with 6 other figures, I was able to bring the per figure cost under $6 each: which would have been less than retail were he actually released via that avenue.

As a figure, Raddus is very well done, though.  The five points of articulation are annoying.  Especially since's Raddus' only scenes are of him sitting down.  But, if Hasbro is only going to make figures in this articulation pattern, they should all have the overall quality of Raddus.  The paint job is excellent.  The sculpting on the head is exquisite and the the colors are true to the character.  Raddus' mouth also opens to give an additional bit of characterization.  The rest of the figure below the neck is OK.  It's a relatively boring design.  But, the head brings all the pizzazz you would want for a character like Raddus.  He, of course, includes a spring loaded weapon that's very reminscent of the G.I. Joe accessories from the early 1990's.  He also has a Rebel blaster to allow kids some play element.  Though, of course, no kid will ever own him since he was only available through collector channels.

Raddus, however, brings up a major plot hole that was created by Rogue One.  In A New Hope, Vader and Tarkin desperately require Princess Leia because she knows the location of the Rebel Base.  However, Rogue One created a couple of issues with this.  First, the Tantive IV was shown docked on the moon of Yavin.  So, ostensibly, the entire crew, including the scores of Rebel Fleet Troopers and droids that were shown being lead away to prison in A New Hope would have know the location of the base.  But, more importantly, the Battle of Scarif left Raddus' command ship disabled.  While it was confirmed by Rogue One's director that Raddus died in the battle, the Empire boarded the disabled command ship.  It's extremely unlikely they killed all the crew: especially with such valuable information at stake.  (We know Stormtrooper weapons could be "set to stun".)  So, again, Vader would have had multitudes of prisoners, all of whom were orbiting Yavin's moon or on it.  Basically, Leia was one of dozens if not hundreds of prisoners who we now know were knowledgeable of the Rebel Base's location.  So, why did Vader and Tarkin focus on her?

The obvious answer is they were dicks and wanted to blow up her planet.  But, then allowing her to escape with Han and Luke to find the base's location was downright negligent.  Tarkin deserved to get blown up for that kind of ineptitude.  Originally, the plan for Rogue One was for the Rebel Base to be on Dantooine.  The producers thought that was too obscure, so they returned to the base seen in A New Hope.  Sadly, had they gone with Dantooine, then this entire plot hole never exists.  But, now, you are faced with Tarkin and Vader being completely incompetent: which flies in the face of the established characterization for both.  I feel Rogue One was a good enough film, though, to forgive this mistake.  But, sometimes, letting nostalgia trump improvement is not the right call.

The Raddus wave is, in a microcosm, why it's annoying to collect modern Star Wars figures.  The first two waves of Rogue One figures hit almost at the same time in September of 2016.  They were readily available through Christmas.  Many of the more popular figures did sell out while there are seas of Jyns and Cassians rotting on the pegs.  But, nothing in those waves was hard to find at all.  Then, though, shipping got crappy.  Wave 3 of Rogue One, which included highly desirable single pack troop builders of the Death Trooper and Scarif Trooper was impossible to find at retail.  Many stores never got it all and it was a no show even in places where all the previous Rogue One figures had sold out.  So, this Wave 4 was dropped from full retail.  This means that online dealers could get it even though traditional brick and mortar stores would not.  (And, it appears Hasbro has offered full case packs of 3 figures in this wave, including Raddus to small sellers.)  So, despite the fact that this figure will not likely ever appear at brick and mortar retail, he's relatively available and affordable now.  Though, affordable probably means $12 or so after you pay for shipping.  That sucks.  But, it's also the reality of collecting a line that's largely being treated as a movie property instead of the traditional collector themed toy line that Star Wars used to be.

In the long run, who knows what will happen with this figure.  It's possible that massive overstock will show up for $6 at discount retail stores a year from now.  It's possible that this figure dries up at retail and is never seen again.  Hasbro could release him again in The Last Jedi waves later this year.  Raddus appears to have found a niche among the collecting community and is a character who will retain some level of popularity.  Though, I'm not sure he'll be popular enough to justify inclusion in the new Vintage Collection starting in 2018.  By the time that line starts, Raddus will be 18 months and nearly two movies removed from his onscreen debut.  And, when looking at the pantheon or Rogue One characters who would be the best candidates for super articulated treatment, Raddus falls down below Chirrut, Baze and K-2SO for sure and maybe even behind Krennic, Saw and some of the new troop builders or Saw's gang.  (Not to mention the almost assured repacks of the Death Trooper, Scarif Trooper, Jyn, Cassian and the inevitable Darth Vader repack of him on a Rogue One card with card art from "that scene".)  So, I'm not hopeful for a Vintage collection release.  But, this figure is good enough for now.  If he shows up in wave 2 of the Vintage collection in 2018, so be it.  But, with Raddus in the fold, I feel my Rogue One collection is really complete.  I may not have all the characters I want in the right articulation.  But, I have the ones I care about.  I may pick up an upgrade here or there if the card art and availability are right.  But, with Star Wars, the good enough threshold will remain in place.  And, this Raddus meets that benchmark with relative ease. 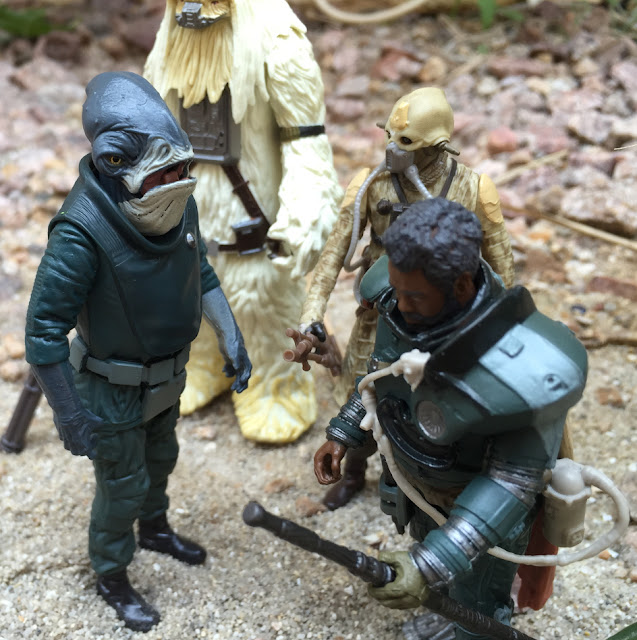 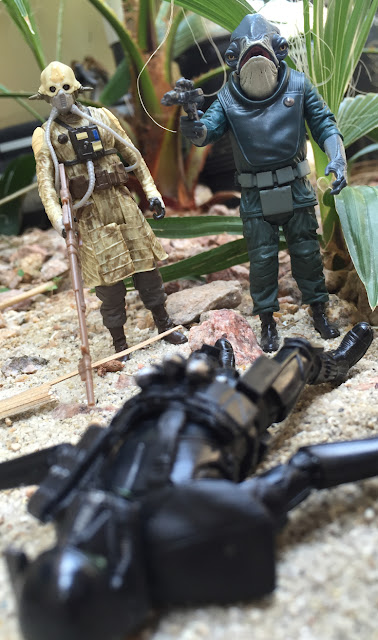 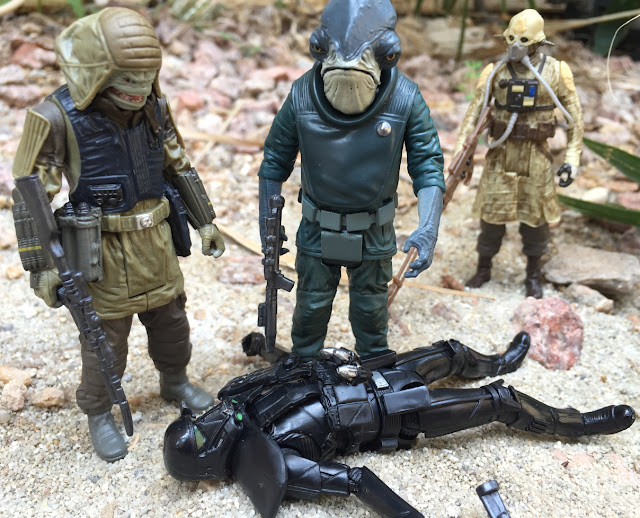 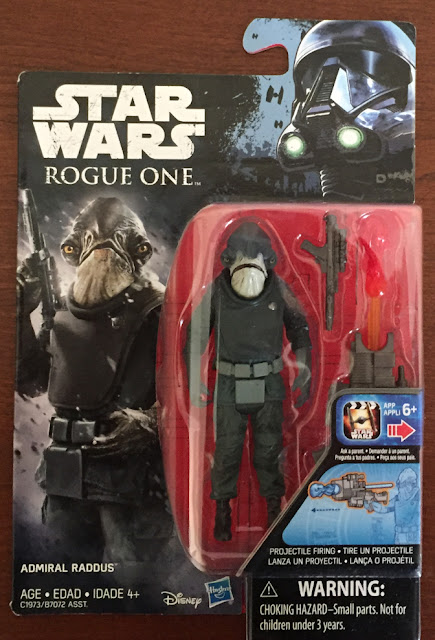 Posted by Robot_Sonic at 2:00 AM
Email ThisBlogThis!Share to TwitterShare to FacebookShare to Pinterest
Labels: 2017, Admiral Raddus, Star Wars