I have many odd, random memories from my youth.  While I recall certain major events, I also find that some small, specific items stick with me and maintain a clarity that is not present for occurrences of far greater significance.  I don't really know why this is.  One of these days, I'll have to research it a bit and see if I can come across some explanation.  But, one such incident involved the 1988 Lightfoot figure.  Aside from this poignant memory, I would not have any recollection of this figure at all.  But, those are the weird nuances of the human brain.

In 1988, I was done with Joes after the first couple of months of the year.  I picked up a few figures in the early part of the year, but after that, my Joe buying days were over.  My youngest brother, though, continued to acquire new figures throughout the year.  As I was into my own stuff, it was rare that I'd have insight into his figure purchases until I'd find a random figure strewn about the house.  Inevitably, the accessories were already dispersed in multiple rooms and the figure's packaging had been thrown away.  So, tracking down all of a figure's gear was often tough.

One day, I happened upon the Lightfoot figure.  He was easy to notice due to the bright yellow color.  For me, though, this was not a detriment...especially once I saw the helmet included with the character.  My final Joe playing days had involved a lot of aerial combat between Sky Hawks and Cobra Drones either from the Night Raven or the Mamba.  I searched long and hard for figures that would make good pilots for the Joe aircraft.  Based on years' worth of Star Wars watching, my Joe pilots had to have certain attributes that would make their inevitable death sequences exciting.  Removable helmets and airmasks were great...especially for Joes who would become trapped in their air filled cockpits beneath the ocean: unable to escape without outside help of highly skilled divers.

So, seeing Lightfoot immediately brought to mind him leaning forward, helmet falling down as his aircraft exploded from behind him.  So, I included the figure in any little 5 minute adventure I might steal away when no one was in the house.  But, the true memory of the figure is from sometime in the summer of 1988.  My parents had an ancient vacuum cleaner.  It was probably made in the late 1960's.  It wasn't the main floor vacuum.  But, it had a hose attachment and was the only way to clean corners or around the baseboards on the floor.  One day, while using this beast, I accidentally sucked up Lightfoot's helmet.  Had I not cared about the figure, it's doubtful I'd have done anything other than shrugged it off.  But, I liked the helmet and wanted it back.  So, I took the vacuum outside, onto the poured concrete stops that lead from an unused door on an addition my father had built onto the house in the early '80's. These steps were rough concrete and were next to a small garden full of hostas that were supported by limestone fossil rocks my brothers and I had found in various camping excursions through the years.  This garden was home to many Joe adventures since it was relatively small and I could sit on the steps or the driveway to play, rather than the mud and grass in the backyard.

But, on these steps, I dug out months and months worth of lint and dirt from the vacuum bag in search of Lightfoot's helmet.  You would think that being the last think sucked into the vortex that it would have been on top of the bag.  But, no.  I had to empty out most of the bag before I found the helmet.  It was no worse for wear other than being covered in a fine layer of dirt.  I washed it off, replaced the vacuum bag and Lightfoot's relevance to my youth ended.

Fast forwarding to around 1995 and 1996, though, Lightfoot was still around.  My brother's interest in Joe basically ended in 1988 as well.  (I'm not sure we had any 1989 figures in our house aside from a few, random appearances of figures that neither my brothers nor I had any recollection of purchasing.)  So, the Lightfoot figure was in good shape.  When I started collecting Joes again in the mid 1990's, the Lightfoot figure was one of the few who was in really good shape.  And, as I hadn't used him much as a kid, he still seemed new to me.  So, when I had just a shoebox of a couple of dozen figures from which to choose to display on my shelves, Lightfoot made the cut.  He was either in the co pilot's chair in the Tomahawk or driving the APC.  But, he found a home since he fit in so well with the neon heavy figures that I was still able to buy at retail in those years.

Since then, though, Lightfoot has been pretty much neglected.  There are lots of better figures for his specialty.  And, my need for new pilots is sated by better figures that fill that role, too.  When it came time to get the Lightfoot character, the Night Force version was really the only choice.  It is really a nice figure and blows this version out of the water.  With that in hand, I had no real use for the yellow version.  So, this Lightfoot fell into obscurity...so much so that I sold my only complete versions without realizing I was missing some gear for my final figure.

As a figure, Lightfoot is three basic colors: yellow, green and black.  They are an eye-catching combination whose stark contrasts does create a visually appealing figure.  Like many 1988 figures, though, Lightfoot is somewhat light on the paint applications and has some unpainted details on his mold.  He's got some body armor, but not enough to really matter and the grenades attached to his chest would offset any value gained from that armor.  Beyond that, the figure is non-descript.  Were he in more muted colors, he's be nothing more than a Wild Card or Armadillo with accessories.

In the accessory department, Lightfoot is unusual.  He comes with a lot of gear.  Usually, figures who included lots of gear had really cool uses for it.  Lightfoot's complement, though, seems mundane and boring.  He has a backpack to which he can attach his "sniffer" either directly through the pegs on the pack or via the belt that can attach to both.  He also includes a robot.  But, it's boring and bright red.  Lightfoot's pack has a lenticular sticker, as does the robot.  But, the overall design just isn't fun.  When you see Trip Wire's mine detector, you know what it is.  Seeing Lightfoot, his specialty is not overly apparent.  His helmet is really just bizarre and bulky.  Plus, it's in a blue color that really doesn't fit the overall color scheme of the figure.  Lightfoot looks better with his gear on.  But, the gear itself isn't all that much fun or useful.

The Lightfoot mold was used three times.  The first was this original version in 1988.  The Night Force version then appeared in 1989.  After that, the mold was sent to Brazil where it was released as Desarmer.  Desarmer is colored nearly identical to the 1988 Lightfoot and includes the same gear.  Lightfoot disappears from there.  Many of his contemporaries in Brazil later appeared in India.  But, many also never appeared again.  It is very likely that Hasbro got the mold back at some point in time.  But, they either then sent it to Funskool or simply packed it away in Asia and never bothered looking for it again.  But, really, the Night Force Lightfoot is pretty much a perfect repaint of the figure.  While you could make a case that the mold might look good in some different colors, there's many other figures I would have wanted to see repainted ahead of him.  At least collectors got one really nice version and alternate, bright version for other uses.

While Night Force Lightfoot figures tend to be very expensive, the original version is not.  Despite lots of easily lost accessories and lenticular decals, the figure remains cheap.  Mint and complete with filecard versions can be purchased for around $7.  But, you can get carded versions for around $20.  (Most of the Night Force Lightfoot's individual accessories sell for more than a mint and complete 1988 figure!)  Either is a solid way to get an interesting figure for a cheap price.    It's hard to call Lightfoot a background character since he's so obscure.  But, he provides good filler and he does look kind of cool when he's fully accessorized. 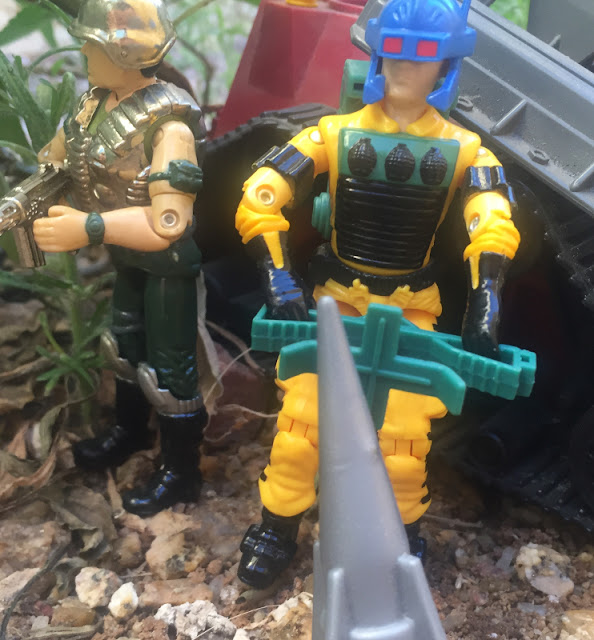 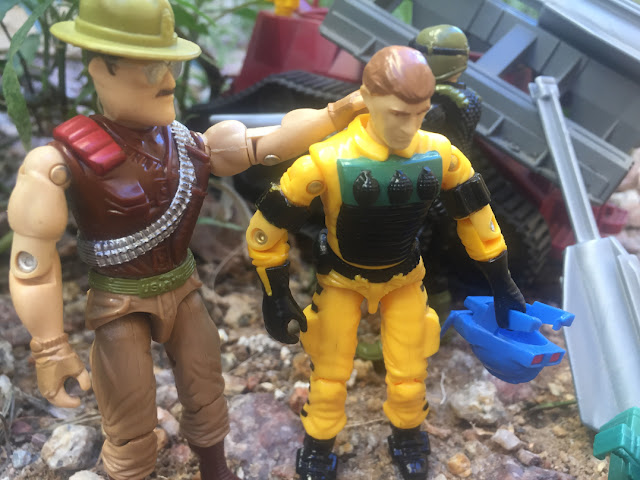 Posted by Robot_Sonic at 2:17 AM
Email ThisBlogThis!Share to TwitterShare to FacebookShare to Pinterest
Labels: 1988, Lightfoot