When I first returned to Joe collecting in the mid 1990's, there were lots of figures for me to buy.  Mostly, this was because I didn't have any figure released after 1989.  But, it was also because Hasbro produced a ton of new figures between 1992 and 1994.  As the months and years went by, though, I managed to buy all of the best figures that were out.  As these dried up, I looked for other criteria that could justify a purchase, such as if the figure included black accessories.  Eventually, though, even these dried up and all I was left was the dregs of the Joe releases.  Outside of the standard subsets like Street Fighter and Ninja Force, there were a few figures that were always easy to get.  Gristle, Beach-Head and Dr. Mindbender were often among the last figures you could find on the pegs.  Another was Col. Courage.

For me, Col. Courage was about one thing and one thing only: the green version of Tunnel Rat's rifle that was included with him.  I instantly recognized the gun when I saw it framed in the package behind the figure.  As a kid, Tunnel Rat's rifle had been one of my last favorites.  But, for some reason, my version was brittle.  As such, the handle broke off (a rare breakage that occurred after 1986) and was rendered useless.  Col. Courage was the first time I had seen the rifle re-used.  (There were older uses, but I was not collecting when they occurred.)  So, I bought the figure for his gun.  Shortly after his acquisition, though, the folly of a neon green weapon assigned to Tunnel Rat became apparent.  But, the figure itself proved somewhat worthwhile.

In the mid 1990's, the only figures I had available to me were a handful of childhood leftovers that were mostly off condition and lacking accessories and the figures I could find at retail.  As the retail figures were new, in good shape and had gear (no matter how poorly colored it might be), they found themselves in various roles outside of the figures' specialties.  For Col Courage, his main use was a generic soldier.  His uniform suggested that he could be a basic grunt (Aside from the tie!) and his plethora of weapons were useful against the onslaught of Crimson Guard Commanders and 1994 Vipers who formed my Cobra army of the day.  In this role, Col. Courage might save the day.  But, far more often, he would die.  Sometimes quickly in the fight and other times, he would last until the final three or four men against Cobra.  But, he found some usage here just to the complete lack of options available to me.

Naturally, as my collection grew with the advent of online acquisitions in the late 1990's, Col. Courage's value proportionally decreased.  I had many better figures to fill any role I wanted.  And, now, I had the means to acquire those figures both in good condition and complete.  So, any advantage held by Col. Courage and some of his less than stellar ilk was lost as I brought more and more outside figures into my collection.  As a sculpted figure, though, Col. Courage isn't terrible.  He is well detailed and the colors used are fairly calm, aside from the neon green highlights.

Col. Courage features a nice complement of weapons.  His tree includes the Tunnel Rate machine gun, a rifle from the Sky Patrol Airborne figure, Shockwave's pistol, Muskrat's machete and Blaster's oddball Battleforce 2000 cannon.  Of course, they are all colored neon green which really limits their usefulness.  He also included the requisite spring loaded missile launcher and missiles.  If you can find some spare weapons in black (his tree was released in black with Predacon) they work much better and draw away from the neon green highlights of the figure: giving Col. Courage a much more muted look.  But, really, there's not much to say about this figure.  Aside from the tucked in necktie, there is nothing exceptional about the mold.  But, for a 1993 release, Col. Courage is just subtle enough that he blends into the line and remains an obscure release.

Col. Courage's mold was used by Hasbro in 1993.  He featured new arms, chest and head.  But, used the lower body from Recoil.  Shortly thereafter, the mold was sent to Brazil.  There, Estrela released the mold as Coronel Coragem (which is a direct translation for Col. Courage) but with caucasian skin.  This figure really is the interesting part of the Col. Courage story.  In Brazil, Recoil's body was used twice around 1993 and 1994 for the Tigor and Flying Scorpion figures.  Neither of these, though, used Recoil's lower body.  The reason being that Hasbro kept it for use with Col. Courage.  Estrela, ultimately, got the rest of the Recoil mold when they released the Coronel Coragem figure.  Col. Courage disappeared after this release.  However, Coragem was released in Brazil with three other figures: Marfim, Brutus and Vandalo.  Brutus and Vandalo are noteworthy as they used the molds from the Headhunter and Gristle figures, respectively.  Hasbro released both of those molds in 2008.  As such, it was extremely likely that Hasbro had access to the Col. Courage mold at that time, but never used it.

This is really a shame.  In 2005, Hasbro produced the terrible Greenshirts 6 figure set that was released at Toys R Us.  Col. Courage's mold would have been a great greenshirt who would have fit into that set and given collectors a very different take on the mold.  Instead, we got the horrible figures that barely fit together and look like knock offs.  Hasbro's inability to search out and understand that the 1990's molds were full of valuable repaints was a big part of why the repaint suffered so much.  Two or three repainted Col. Courages figures, two or three Steel Brigade updates and even two of the Greenshirts that were released would have been a pack that collectors would still enjoy.  But, like so many other opportunities of that era, Hasbro simply squandered it for poor reasons.  It's an almost certainty that this mold is gone now.  But, at least there's something out there for collectors to enjoy.

Left on their own, mint and complete Col. Courage figures will sell for $2 - $3.  Dealers will get $9 or $10 for him.  But, that's mainly due to limited supplies driven by the fact that the figure is immensely unpopular.  The late release, substandard name, neon green highlights and the tie on a combat uniform all add up to a figure that has never and will never catch on in the collecting community.  As a background filler, though, Col. Courage is a good pick up for a couple of bucks.  His mold doesn't have the heft of many of his contemporaries and he can fit in with figures from many years.  That's not a bad little use for a cheap and common figure. 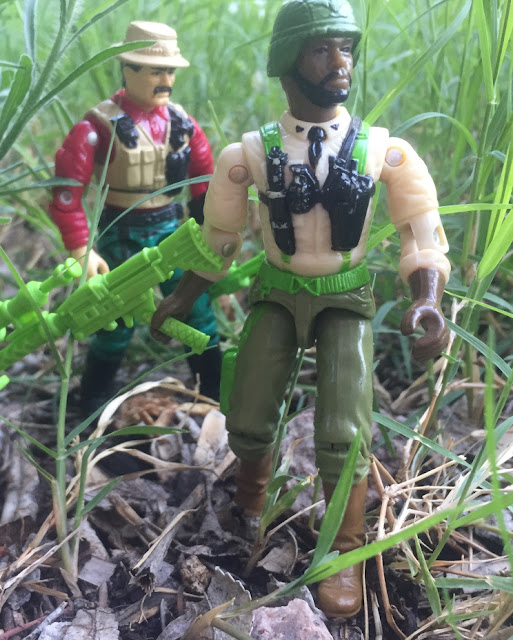 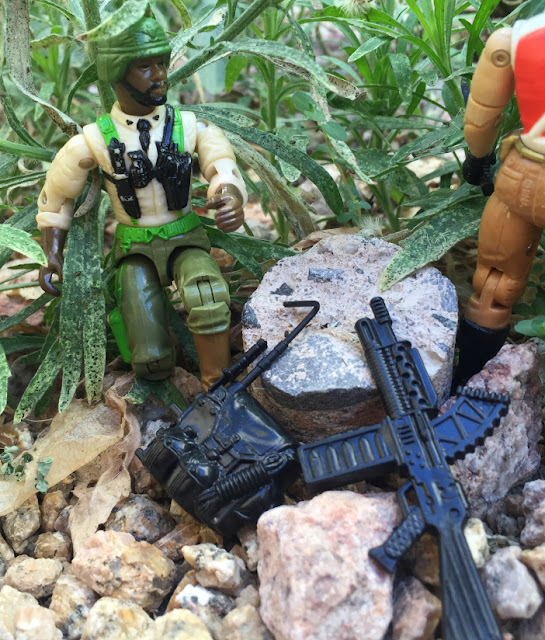 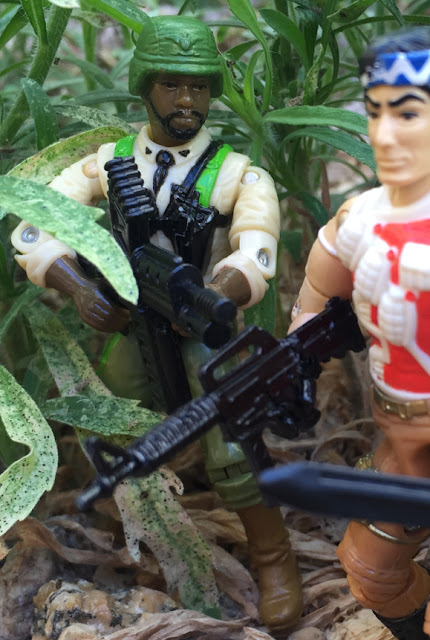 Posted by Robot_Sonic at 1:59 AM
Email ThisBlogThis!Share to TwitterShare to FacebookShare to Pinterest
Labels: 1993, Battle Corps, Col Courage