As part of the ill conceived "HasCon", Hasbro released this spectacular 1995 Dr. Mindbender Battle Corps Rangers artwork.  It is, to my knowledge, the debut of what would have been this figure's card artwork.  It has taken nearly 25 years for this artwork to come out and it's rather disingenuous of Hasbro to have held it back for a self serving convention that doesn't cater to Joe fans rather than showcase it at any of the 15 Joe conventions that have been held: many encompassing major milestone anniversaries of the brand.  That aside, though, we finally have a glimpse into what this character may have looked like on retail shevles.

From the hand painted sample of this figure that exists, we knew that the figure would be mostly purple and black.  So, the colors aren't really a surprise.  But, there are a few elements to the figure that do stand out.  The most obvious is the black version of the 1992 Wet Suit's rifle.  This is a terrible weapon and would have been a huge disappointment for this figure.  It's an odd choice for sure.  I'll discuss that more later on, though.

The next interesting part is Mindbender's hand.  In the unpainted prototype, the hand appeared to be a monstrous deformity.  On the painted figure, the hand was just purple.  Initially, I could have seen this just being a cost saving measure.  However, the artwork shows that the hand is actually a glove and the razor sharp fingernails are metal weapons built into the fingertips.  On the one hand, this is kind of a cool.  But, on the other hand, it takes away from the monster aspect of Dr. Mindbender.  The unpainted piece always conjured up a ghoulish image of a broken Dr. who was the victim of his own mad experiments.  This artwork, instead, shows a man wearing armor to enhance his fighting prowess.  It's a drastic departure from my ill formed, preconceived notions for the figure.  So, I feel that it's destroying 20 years' worth of my imagination of what this figure would have been.

The final aspect of the art that is great is that we can see Mindbender with his helmet on.  The unpainted prototype has the helmet.  But, the hoses were hard resin, despite the fact that there were holes in the back of the helmet which appeared to be for the hose ends.  This art shows that the figure was likely to have had hoses that did attach into the helmet.  It's possible they would have separate pieces.  Or, the entire helmet may have been planned to be flexible plastic like the mask on the 1994 Shipwreck.  Either way, it could have worked.

Coming back to the gun...I wonder if this Dr. Mindbender was supposed to be a diver.  My first inclination is definitely not.  He doesn't have flippers and any diver would be drawn with those.  But, the Wet Suit gun gives me pause.  and, this artwork clearly shows the mandible like helmet, much more clearly.  This is interesting because of the bug like figure that appears on the 1995 Tactical Battle Platform artwork.  As this figure is attacking the TTBP, it's obvious he is a Cobra.  He is also wielding the Wet Suit gun.  The character's head, though, is looking up with pincers.  In looking more closely at this Mindbender, it appears this is very likely meant to be Dr. Mindbender crawling out of the deep the attack the Joes.  Plus, the helmet with the hoses looks like it could be underwater breathing gear.

Now, I have no idea why Hasbro would make Dr. Mindbender (of all people!) a diver.  It is possible.  The prototype Dr. Mindbender appears to have a webbed left hand.  However, this detail is missing in the artwork.  At any rate, it makes me that much more interested to read this figure's planned filecard to see what Hasbro intended for him. 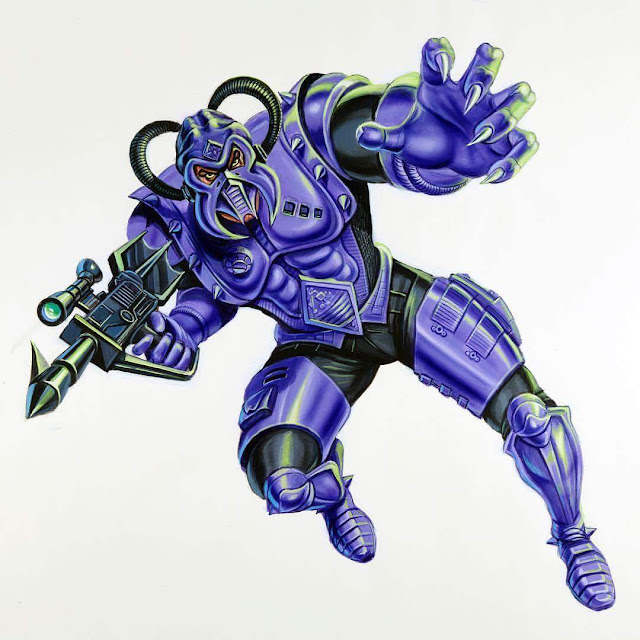 Posted by Robot_Sonic at 1:51 AM
Email ThisBlogThis!Share to TwitterShare to FacebookShare to Pinterest
Labels: 1995, Battle Corps Rangers, Dr. Mindbender, Rarities