Action figures evolve over time.  While they didn't invent the scale, Kenner's 3.75" Star Wars figures dominated the market and pretty much set that size as the pre-eminent format for the next 30+ years.  G.I. Joe, though, took Kenner's scale and maximized it.  Hasbro revolutionized the articulation, paint applications, construction quality, accessories, vehicles and playsets in that size through the 1980's.  Even within their flagship 3 3/4 line, Hasbro continued to improve the sculpting and design of the figures.  Sometimes, though, they went too far.

As the 1990's dawned other toy companies were intruding on Joe's dominance.  Ninja Turtles were the rage.  And, other toy companies, freed from the constraints of the human form of their toys, began to increase figure size to showcase more detail and include play features that were built into the toys themselves.  Not wanting to fall behind, Hasbro's designers followed suit.  First, play features were built into accessories and included gear.  But, that wasn't enough.  In 1992, Ninja Force debuted.  These figures featured spring loaded action features that showcased "ninja" moves.  But, to achieve this new functionality, some concessions in figure design had to be made.  The Ninja Force figures lacked the back screw and waist movement that had been the hallmarks of the G.I. Joe line.  In 1993, Ninja Force went even further with the action features and accompanying construction changes.  Which lead to the 1993 Ninja Force Scarlett figure.

Let's make no mistake.  When taken in the context of 2018, this version of Scarlett is a terrible figure.  She is big, bulky, has horrible hair, a large face and outrageous colors.  In short, she is everything an action figure released in 1993 would have wanted to be and everything a collector in 2018 despises.  But, even for 1993, this figure is not great.  The blocky lower body construction looks terrible in the 3 3/4 scale.  And, it's even more out of place on a female figure.  The string hair, though, was about the best you could expect for movable hair in this scale.

The biggest use of this Scarlett is for customs.  Not so much the body, but the head often appears in custom takes on Scarlett.  The head is nicely detailed and the long hair is a fun, customizable bit that attracts talented designers to find a way to incorporate the head onto more traditional Scarlett body molds.  The size of the head makes it problematic to be placed on the 1982 Scarlett body.  But, many talented customizers have pulled it off to success.

This Scarlett's claim to fame was the comic book.  As the comic limped towards cancellation, Snake Eyes and his clan remained the focal point.  Scarlett was featured as prominently as ever.  But, she started to appear in this uniform.  The '90's artwork of many of these later books doesn't appeal to me as much as the more traditional artwork from the '80's did.  But, Scarlett's appearance on the printed panel sold this uniform and look for her as something useful.  The colors were very early 1990's.  But, having an update to her combat appearance for the first time in a decade was welcome.

Scarlett's weapons were typical of 1993 Hasbro releases.  They were all included on a weapon tree and were bright yellow in color.  She included three swords, a knife, nunchuks, two claws and a figure stand.  The weapons fit with the figure since they match some of her base colors.  In the comic, Scarlett often used edged weapons.  So, the inclusion of them here fit with the appearances of the character.  The weapons are all larger than the fine swords that I had grown up with in the '80's.  But, they worked with the slightly bulkier figures that were being produced in 1993.

Hasbro milked three releases out of this Scarlett mold.  In the same year that this figure was released, Hasbro also repainted it as the body for Chun-Li in the Street Fighter series of Joe figures.  A blue and yellow version of Chun-Li was released carded and an orange version was released with the Beast Blaster.  A third and final version of Chun-Li Xiang was released in the Street Fighter Movie Line of figures.  But, this used an all new mold and did not resurrect the Scarlett body.  All the 1993 Ninja Force figures disappeared after that aside from those that were carried over to the Shadow Ninjas line in 1994.  Scarlett never appeared again in this configuration.  An anniversary style figure was released with colors and design that were an homage to this 1993 figure.  But, for fans of an alternate look for Scarlett, they begin and end with this figure in the vintage line.

For me, seeing a figure that is so stereo-typically 1990's is a fun reminder of that time.  Ninja Force figures were the bane of my Joe buying existence in the mid 1990's since they were always left over at Toys R Us, clogging the shelves and mocking me at what the Joe line had once been.  It took months of only finding them and nothing else for me to finally break down and buy a loose Night Creeper.  The figure was severely flawed.  But, in an age when I only had around 20 figures available to me, even that Night Creeper found some use.  This Scarlett reminds me of those days: both in the frustration at only finding her brethren at retail but also in the enjoyment of rediscovering my collecting passion again.

I recently paid $6 for a MOC version of this figure.  Getting a mint, loose and complete with filecard version probably would have cost me the same after I paid shipping.  For the price, I was just going to open the figure.  But, as I looked at her, I couldn't find a reason to do so.  The figure is bad and would never appear in a photo outside of this profile.  She would sit in a bag for years.  Then, maybe, she'd end up in a display case, near the back and out of sight.  I also happen to have a bunch of 1993 Ninja Force figures still carded.  So, I'm just adding her to that collection.  Some day, I'll come across a cheap, loose version.  For now, though, there's simply no reason to open this figure up.  It's not a good Scarlett and it's actually just a bad G.I. Joe figure.  But, it's also the only incarnation of one of the three or four most important characters in the comic run after the 1982/1983 releases.  So, she has significance for that and is worth picking up for the pittance she costs. 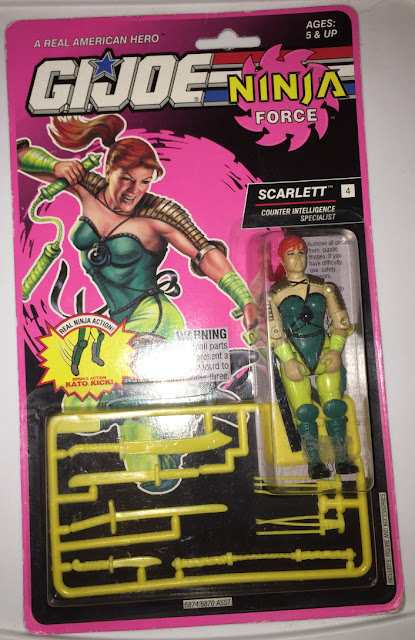 Posted by Robot_Sonic at 1:00 AM
Email ThisBlogThis!Share to TwitterShare to FacebookShare to Pinterest
Labels: 1993, Ninja Force, Scarlett