I've talked before about timing and how it impacted the Joe line, especially in the 2000's.  The comic pack releases remain one of the more frustrating aspects of that time period.  It was a novel concept and one that found great success in other toy lines and later incarnations of Joe.  But, the original comics packs were mostly destined for clearance racks...even if the figures in them were good.  But, I still maintain that a lot of that was due to timing.  In looking at the early comic packs, they were too similar in look and feel to establish themselves at retail to non-collector toy buyers.  By the time later offerings with more diverse figures appeared, the concept was dead and collectors had moved on.  In 2005, Hasbro released one of the best comic packs in the series: issue #49 with probably the best Firefly ever made, a pretty bad Scrap Iron and a new Serpentor.  It is Serpentor who has my attention this week as the figure is well done, features some sculpting and remains true to the character.

This Serpentor interpretation is bright.  So bright that were he a 1994 release, he would be generally hated and roundly mocked in collecting circles.  In the context of a 1980's comic book coloring palette, though, this Serpentor gets a pass.  The bright yellow and pastel greens make for a visually stimulating combination of colors.  And, as Serpentor has always been kind of out there in terms of his choice of uniform, the look also fits with the character and what we perceive his taste would be.

This version of Serpentor includes pretty much the same accessories as both other versions of the character.  You have the Cobra hood that plugs into his back like a backpack: only in bright yellow.  There is the bright yellow cape.  The cape retains some of the metallic sheen of the 2002 entry and fits the figure very well.  You then have the Roman dagger which is unique to the character.  The fresh addition in the comic pack was that Serpentor's new head could be covered by a removable helmet.  While removable helmets were a stalwart of Hasbro vintage Joe style repaints of the early 2000's, they usually had to be large to cover a head that was properly scaled to the body.  The results are figures where the helmets just don't look right.  With Serpentor, though, the helmet really worked.  It fit tightly to the head and doesn't look out of place when on or off.

The same can't be said for the head itself, though.  While this head is probably better than most of the full faced human heads that Hasbro attempted in the mid 2000's, it still has flaws.  Serpentor's hair looks like it escaped from a bad '50's movie.  And, his face is strained into a constipated scowl that's less scary than it is just funny.  Then, you have the mouthful of teeth that show Serpentor is always mid strain.  Maybe that explains why he's generally evil.  It's nice that we have an un-cowled version of the character.  But, this head isn't the best representation of a character that is as important as Serpentor is to the Joe world.

For a character of his stature, Serpentor was certainly neglected in terms of actual figures.  The 1986 figure did see a long life as a mail away figure.  So, that may have played into Hasbro's reluctance to re-imagine the character in the vintage days.  It was not until 2002 that a new Serpentor returned.  This limited edition release with the black body may be the best Serpentor figure ever released.  This comic pack figure then appeared in 2005 and that ends the entire population of released Serpentor figures in ARAH construction.  There was, though, an alternate Asian figure of this Serpentor.  He was pretty much identical to the production figure with one major difference: the alternate figure featured green hair.  In retrospect, the look is a little too much like the Joker.  But, it also fits the oddity that is Serpentor character.  While it's now nearly impossible to find, this alternate Asian release is a fun take on the Serpentor character, even if it doesn't offer anything all that spectacular.  Serpentor had no international variants.  I'd have loved to see Funskool's interpretation of the snake suit.  But, it wasn't to be.

The comic including this Serpentor figure was dead as soon as it arrived at retail.  While it was popular for a couple of weeks and even commanded a premium for a few weeks, it quickly became clearance fodder.  Standard retailers cut the pack to 1/2 price.  Then, more and more stock showed up at discount outlets, also for the low price of $5.  Many collectors picked up a few spare sets at these low prices just to have the Cobra characters for future custom fodder or for the accessories.  But, even as the market finally absorbed the retail overstock, demand for the individual figures or carded sets remained almost non-existent for nearly a decade afterwards.

Today, you can still get carded sets including this Serpentor for around $20.  It's actually kind of a pain to find the figure loose, mint and complete.  But, considering you get a great Firefly and some Scrap Iron parts along with this Serpentor for $20, it's easier and more worthwhile to just plunk down the cash and buy the carded set.  I'm glad I was able to acquire several of these figures at retail.  As the comic packs became clearance fodder, I bought way more of them than I ever should have.  But, cheap and easy to acquire Joes are a vice of mine and it turned out to be the last time Joes were ever available at retail.  So, I have no regrets.  As for this figure, it's solid.  If you only have Serpentor, this would not be the version I'd choose.  But, as he's cheap, this guy is worth the acquisition, if only to have something different for the Serpentor character. 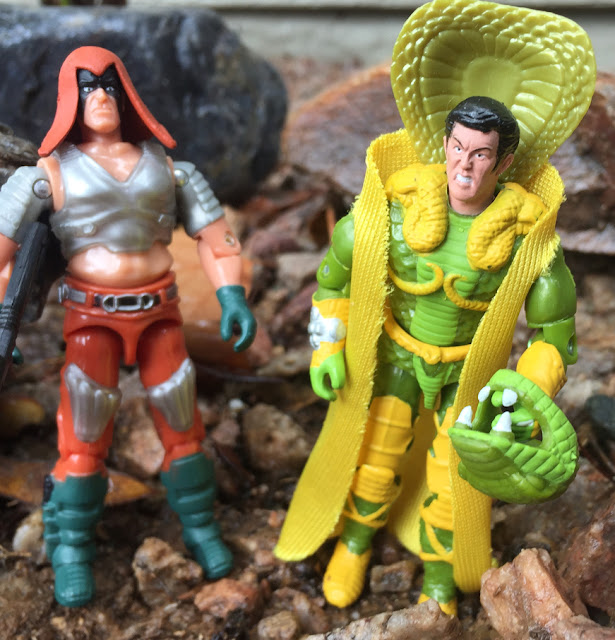 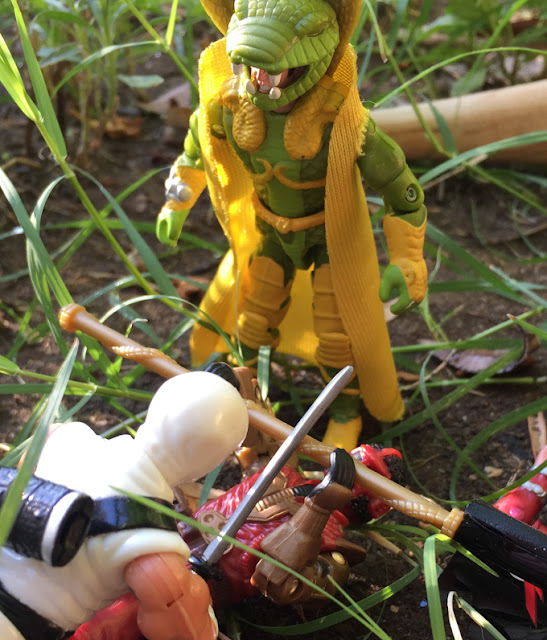 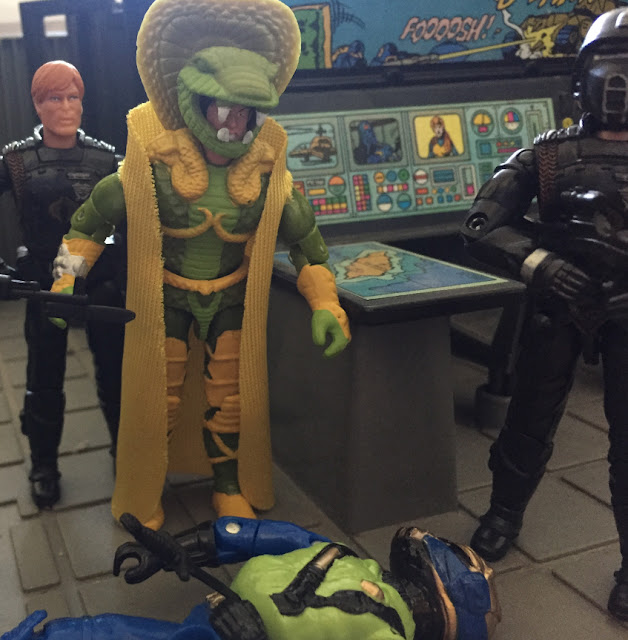 Posted by Robot_Sonic at 2:00 AM
Email ThisBlogThis!Share to TwitterShare to FacebookShare to Pinterest
Labels: 2005, Comic Pack, Serpentor